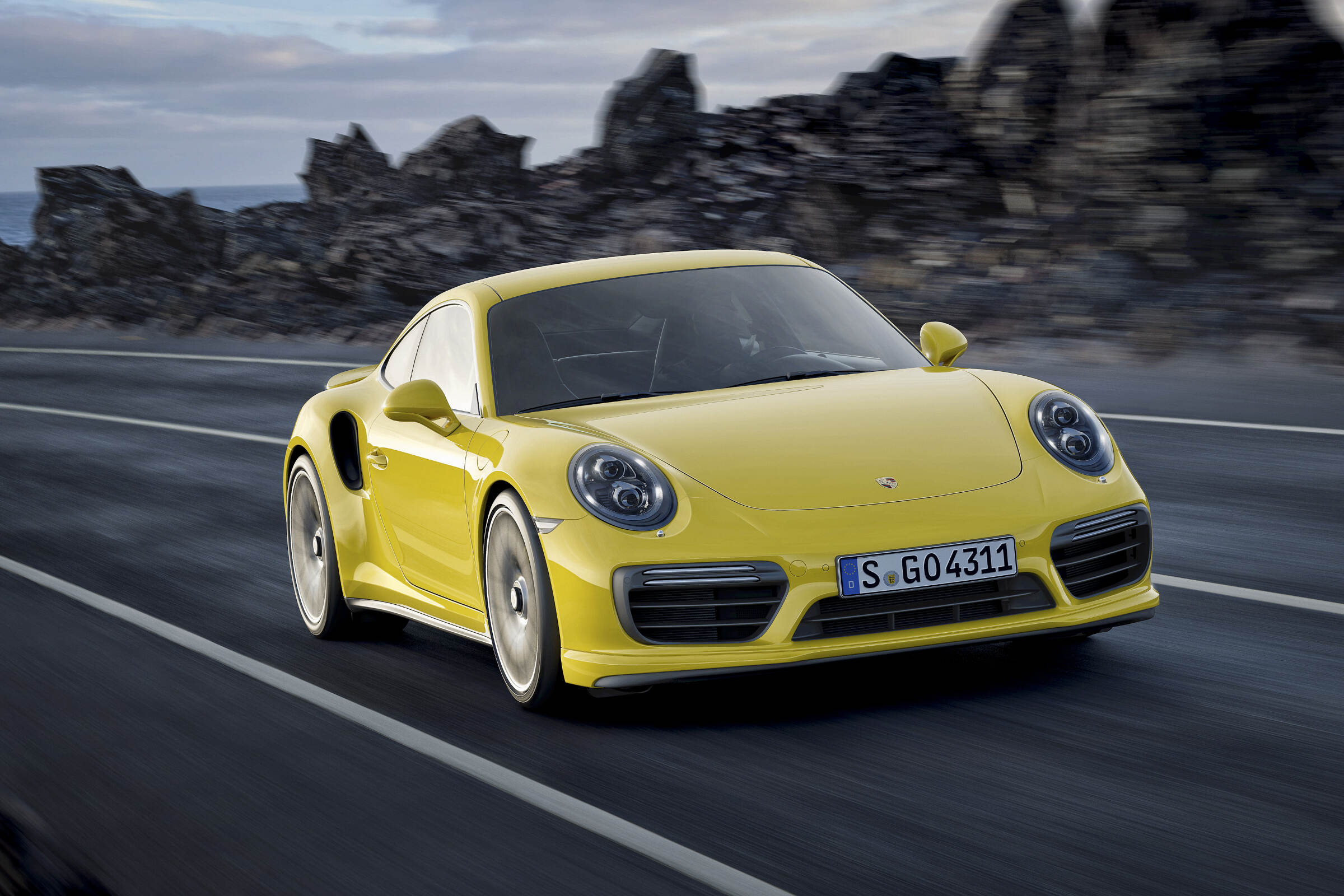 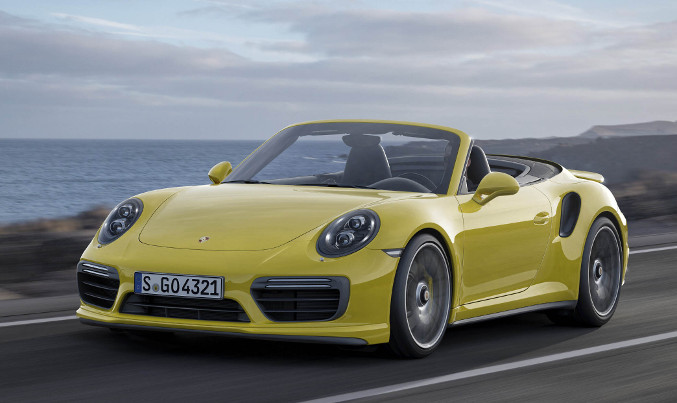 Scheduled to make their world debut at the North American International Auto Show in Detroit, USA, in January 2016, the top models of the 911 model range – the 911 Turbo and 911 Turbo S – now boast 20 hp (15 kW) more power, sharper design and even broader everyday usability.

Available in both Coupe and Convertible versions, the twin-turbocharged, 3.8-litre flat-six engine in the 911 Turbo now has an output of 540 hp (397 kW). This power gain was achieved by modified inlet ports in the cylinder head, new injection nozzles and higher fuel pressure. The 911 Turbo S now develops 580 hp (427 kW) courtesy of new turbochargers with larger compressors. Porsche is still the only manufacturer to utilise turbochargers with variable turbine geometry in petrol engines.

The engines now also have what is known as a ‘dynamic boost function’ to further raise engine responsiveness in dynamic operation. It maintains the charge pressure during load changes – i.e. when the accelerator pedal is released briefly. This is achieved by just interrupting the fuel injection, whereas the throttle valve remains open. As a result, the engine reacts with practically no delay to a subsequent press of the accelerator pedal. The effects of this function are more pronounced in the Sport and Sport Plus modes than in Normal mode.

Overall, the new high-performance sports cars attain breathtaking driving performance, while fuel consumption is reduced even further. The 911 Turbo S Coupé sprints to 62 mph in 2.9 seconds. Its top speed of 205 mph is eight mph higher than before. The 911 Turbo reaches the 62 mph mark in 3.0 seconds, and its top speed is 198 mph – three mph faster than the previous model. Nevertheless, the coupes only consume 31 mpg (9.1 l/100 km), and the convertibles 30.4 mpg (9.3 l/100 km). This represents a gain of approximately two miles per gallon for all versions. This has been delivered via further advances in electronic engine and transmission management with revised gear change mappings.

A standard feature for both derivatives: Sport Chrono Package with Mode Switch and Sport Response button

A familiar option on the next generation 911 Carrera models, the new 911 Turbo and Turbo S feature as standard the new GT sport steering wheel – 360 mm in diameter and with a design adopted from the 918 Spyder. It features what is known as a ‘Mode Switch’, a rotary ring with stepped positions that is used to select one of the four modes Normal, Sport, Sport Plus or Individual. The Individual setting lets the driver configure and store a very individual vehicle setup. Another new feature of the Sport Chrono Package is the Sport Response button at the centre of the mode switch. Inspired by motor sport, at the push of a button it pre-conditions the engine and transmission for optimum responsiveness. In this state, the vehicle can produce instantaneous acceleration for up to 20 seconds, such as during an overtaking manoeuvre. An indicator in the instrument cluster in the form of a running timer shows the driver the elapsed time. Sport Response functionality can be called up as often as desired, and from any of the driving modes.

Porsche Stability Management (PSM) in the 911 Turbo models now has a new PSM Sport Mode. A brief press of the PSM button on the centre console puts the system in a very sporting configuration – which is independent of the prevailing driving programme selected. The separately switched PSM Sport mode alters the PSM intervention threshold much more than was the case in the Sport Plus mode of the previous model. The new mode makes it possible to approach performance limits even more closely – such as when on a race track. In this mode, the PSM warning lamp lights up, and a message in the instrument cluster indicates that the PSM system’s contribution towards driving stability is limited. However, PSM still remains active in background, even in the PSM Sport mode. A long press of the PSM button, though, completely deactivates PSM, as usual.

The chassis of the new 911 Turbo models with Porsche Active Suspension Management (PASM) as standard offers an even greater spread between performance and comfort. In addition, the 911 Turbo S offers a full complement of equipment for dynamic driving: Porsche Dynamic Chassis Control (PDCC) roll compensation is standard as is the Porsche Ceramic Composite Brakes (PCCB) system.

New options for all 911 Turbo models include the radar-based lane change assist and a lift system for the front axle that can be used to increase ground clearance by 40 mm at the front spoiler lip at low speeds.

Naturally, the new generation 911 Turbo models adopt significant characteristics of the striking design of the latest Carrera models, supplemented by typical 911 Turbo special features. The newly-formed nose with side-mounted airblades and precisely laid out narrow LED front lights with double fillets give the front end a wider look, further complemented by the additional fin in the central air intake.

In profile, the high-performance sports car boasts new design 20-inch diameter wheels. On the 911 Turbo S, for instance, the centre lock wheels now feature seven instead of ten double spokes. Also new are the wheel dimensions for the 911 Turbo: with 9J x 20 rims at the front and 11.5J x 20 rims at the rear, the new wheels are each half an inch wider than previously. They are now the same size as the wheels of the 911 Turbo S. The new door handles are also now a smoother, cleaner design – just like on the Carrera models. The rear body styling was also thoroughly revised. Eye-catching at first glance are the three-dimensional style rear lights with four-point brake lights and ‘aura-style’ illumination, familiar from the 911 Carrera series. 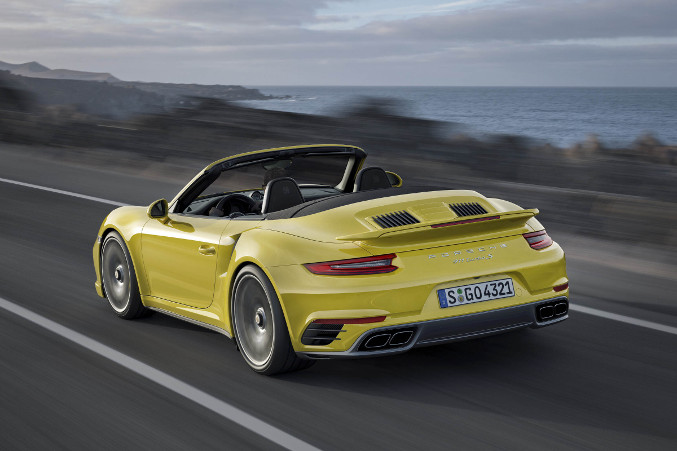 The exit openings for the exhaust system at the rear as well as the dual tailpipes were also redesigned. The grille of the rear engine lid was also redesigned, and it now features three parts: the right and left sections have longitudinal louvres, and in the middle there is a separate cover for optimised air induction for the engine.

As with all 911 models, the newly-developed infotainment system, Porsche Communication Management (PCM) incorporating online navigation, is a feature of the cockpits of the 911 Turbo models. This system features a multi-touch monitor with high-quality glass surface, which is perfectly integrated into the centre console, and it offers numerous new and extended connectivity functions thanks to the standard Connect Plus module. Navigation can also access the latest traffic information in real time. Routes and places can be visualised with 360-degree images and satellite images. In addition, the system can now process handwritten inputs. Moreover, mobile phones and smartphones can now be integrated more quickly, easily and comprehensively than before via Wi-Fi, Bluetooth or cable. Selected vehicle functions can now be controlled remotely as well.

In addition, as in the previous Turbo models, the upgraded Bose audio system is fitted as standard; although a Burmester installation can be delivered as an option.

Customers will also be invited to explore the potential of their new car, and further develop their own skills behind the wheel, by participating in a bespoke driving experience around the tracks at the recently-extended Porsche Experience Centre, Silverstone. 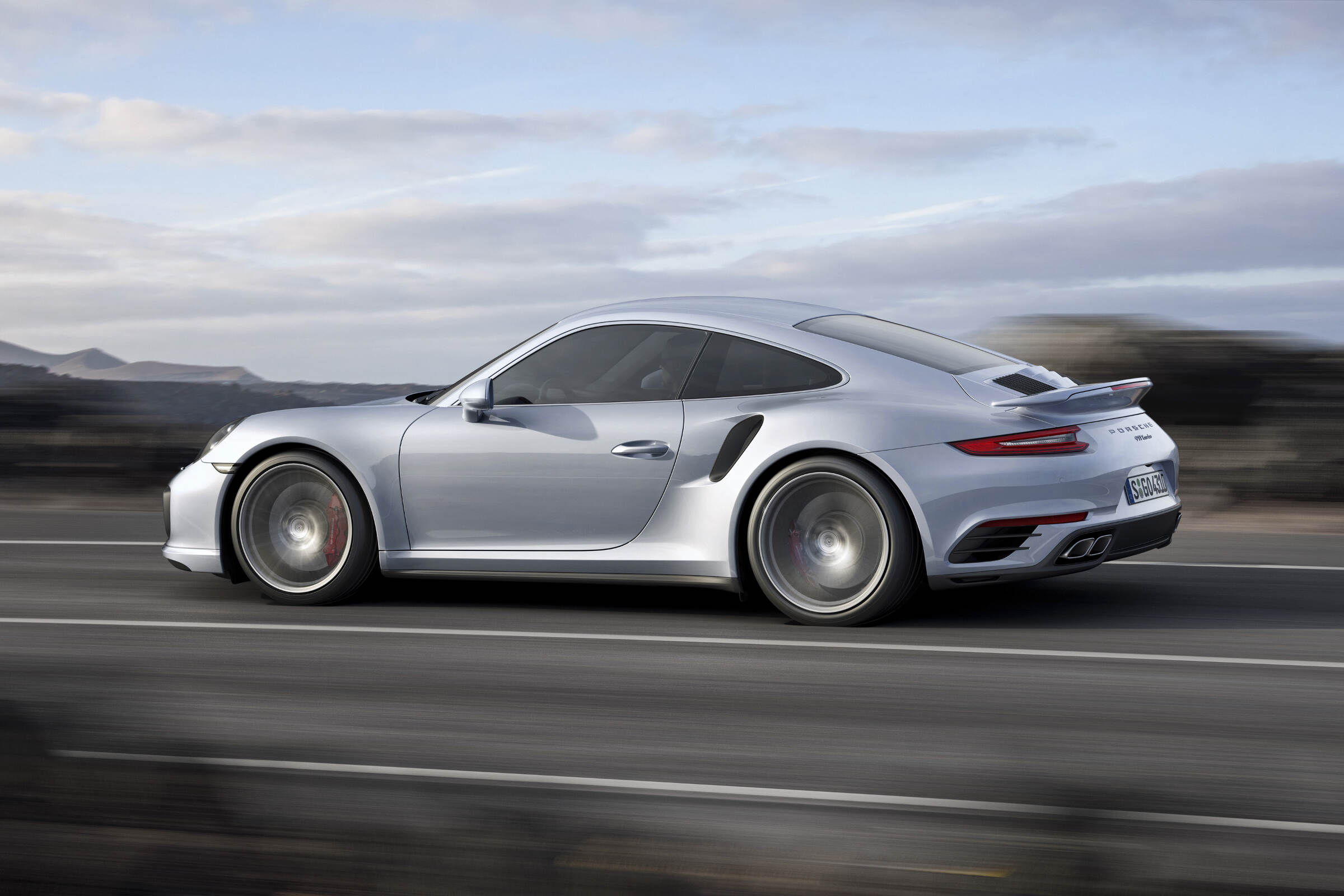