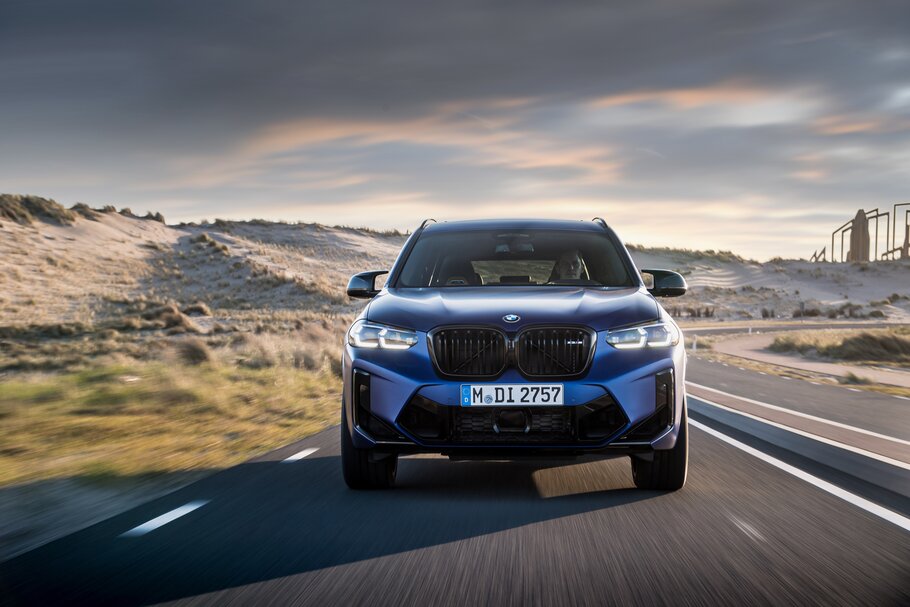 Most noticeable is the look of both models. They share the new design features drawn from the BMW X3 and BMW X4 and further strengthen their bold new appearances with purposeful M specific bodystyling.

They feature the most powerful BMW in-line six-cylinder petrol engine. Delivering 510hp and 650Nm of torque, both the BMW X3 M Competition and BMW X4 M Competition can sprint from 0 to 62mph in only 3.8 seconds – an improvement of 0.3 seconds compared to their predecessors.

New sports seats and upholstery, together with the control island from the BMW M3 and BMW M4, are at the heart of the updated, modern interiors, while the inclusion of standard features such as BMW Live Cockpit Professional with fully digital display cluster and two 12.3-inch displays, and Harman Kardon surround-sound entertainment system improve driver comfort and convenience.

Larger BMW kidney grille and a more striking front section
The new BMW X3 M Competition and the new BMW X4 M Competition have the enlarged BMW kidney grille with a one-piece frame and headlights that are around 10mm flatter. A black bar which houses the front-facing iCam lens provides visual separation of the BMW kidney grille, the frame of which is also finished in high-gloss black, as are the M double kidney bars. The radiator grille also features a vehicle-specific logo: X3 M or X4 M. In addition to the standard adaptive LED headlights with Matrix function, BMW Laser Light with a range of up to 650 metres is now also available as an optional extra.

BMW M GmbH has designed the M specific front apron to be even more striking. One particularly standout feature is the new, vertically arranged and elongated side air intakes: these are angled down towards the spoiler lip and then the centre of the vehicle, where they follow the hexagonal shape of the central air intake. They are framed by trim elements in high-gloss black, which is also used for the caps of the aerodynamically optimised M exterior mirrors and the characteristic M gills integrated in the air breathers, as well as the rear spoiler on the BMW X4 M Competition.

New rear aprons and exclusive new paint finishes
The BMW X3 M Competition has the full LED rear lights of the refreshed BMW X3 with a black surround and narrower illuminated graphics. The lower section of the rear apron is M specific and finished in high-gloss black. The large diffuser is flanked on the right and left by the tailpipe pairs of the M sports exhaust system, which are finished in black chrome.

The new rear apron of the BMW X4 M Competition features a wide insert in the shape of a large anvil. Like the lateral air‑curtain‑panels, which also accommodate the new vertical reflectors, this is finished in high-gloss black. The two pairs of tailpipes in black chrome also frame the diffuser on the BMW X4 M Competition. In addition to Carbon Black metallic and Brooklyn Grey metallic, there are two new paint finishes reserved exclusively for the X3 M Competition and X4 M Competition models – Marina Bay Blue metallic and Sao Paulo Yellow. In addition, a wide range of BMW Individual paint finishes are available for the first time, such as the matt finish Frozen Marina Bay Blue metallic.

High-revving six-cylinder engine with motor racing expertise
At the heart of the BMW X3 M Competition and BMW X4 M Competition is BMW’s most powerful in-line six-cylinder petrol engine with a peak power output of  510hp and peak torque to 650Nm – an increase of 50Nm. Both cars can sprint from 0 to 62mph in 3.8 seconds – a 0.3-second improvement compared to the previous models. This puts the BMW X3 M Competition and the BMW X4 M Competition on a par with high-performance sports cars. The top speed is electronically limited at 155mph. This limit is raised to 180mph in conjunction with the optional M Driver’s Package.

The engine’s racetrack-proven cooling system is designed to enable an exceptionally high level of output and includes two laterally positioned radiators in addition to the central one. There is also an additional engine-oil cooler and a separate transmission-oil cooler. BMW M GmbH motor racing expertise is also evident in the design of the oil supply system, which is geared towards racetrack use.

Power is transmitted to the rear wheels via an 8‑speed M Steptronic transmission with Drivelogic. In addition to fully automatic gear changes, it also enables manual shifting with sequential selection of the drive position. In addition to the new M gear selector in the centre console, shift paddles on the steering wheel are also available for this purpose. In manual mode, multiple downshifts can be made to the lowest possible gear to harness the engine drag torque for braking. When accelerating, no forced upshift is triggered even at high revs.

M xDrive all-wheel drive system with rear-wheel orientation
The M xDrive all-wheel drive system also contributes to the agility of the BMW X3 M Competition and BMW X4 M Competition, combining the traction benefits of power transmission to all four wheels with the proven dynamic qualities of classic rear-wheel drive. The electronically controlled M xDrive – which is networked with the DSC (Dynamic Stability Control) system – will only direct part of the drive torque to the front axle when the rear wheels reach the limits of their power transmission capabilities. At the touch of a button, the driver can influence not only how the driving stability control works but also the distribution of drive torque between the front and rear wheels.

The damping forces are ideally suited to cope with every situation on the road and set individually for each wheel at continuously varying levels by means of interior electromagnetically controlled valves. The basic characteristic of the dampers can be influenced at the touch of a button. Driving precision and response are based on extensive measures to reinforce the body and suspension attachment, for example an M specific strut package.

The electromechanical M Servotronic steering and DSC (Dynamic Stability Control) also contribute to the typical M driving experience. In M Dynamic Mode, this system allows additional wheel slip to generate the self-steering response that is typical of M, enabling controlled drift manoeuvres when used on the race track, for example.

M compound brake system and 21-inch wheels as standard
The performance characteristics of the BMW X3 M Competition and the BMW X4 M Competition are complemented by the high efficiency of the standard M compound brake system. The brake callipers bear the M logo and are finished in blue as standard or in high-gloss black or red on request. The perfectly matched overall package for maximum performance also includes the 21-inch wheels with mixed tyres in 255/40 ZR21 at the front and 265/40 ZR21 at the rear. One new feature is the M forged wheel 892M Star Spoke in Jet Black burnished, which saves 2kgs of weight per wheel. As an alternative, the M light alloy wheel 765M V-Spoke is likewise available in Jet Black burnished.

BMW Live Cockpit Professional with intelligent networking
The new BMW X3 M Competition and the new BMW X4 M Competition are equipped with BMW Live Cockpit Professional including Connected Drive as standard. Intelligent networking including innovative digital services based on BMW Operating System 7 – such as BMW Intelligent Personal Assistant, Connected Music and Remote Software Upgrade – enable strong interaction between driver and vehicle. Intuitive multi-modal operation has been further optimised. Depending on the situation, the driver has a choice between touch operation on the Control Display, the tried-and-tested BMW Controller, the multifunction buttons on the steering wheel or voice control. A Harman Kardon surround sound system now comes as standard.

BMW Live Cockpit Professional offers a fully digital display network: the high-resolution instrument cluster behind the steering wheel and the Control Display each have a screen diagonal of 12.3 inches. The fully digital instrument display offers, among other things, the M View with specific displays adopted from the BMW M8 models. M specific display content is also available with the optional BMW Head-Up Display. The cloud-based navigation system BMW Maps offers particularly fast and precise calculation of routes and arrival times, real-time traffic data updates at short intervals and free text input for selecting navigation destinations. In addition, BMW Maps with Connected Parking provides drivers with even more detailed support in the search for a vacant parking space near their destination. What’s more, On-Street Parking Information and ParkNow services are integrated in the range of BMW Maps functions.

Smartphone integration and BMW Intelligent Personal Assistant
Another standard feature is optimised smartphone integration. Android Auto can now be used with the vehicle’s operating system, in addition to Apple CarPlay. Here, the driver can view all the important information from the apps on the Control Display and also in the instrument cluster and the optional Head-Up Display. The capabilities of the BMW Intelligent Personal Assistant are being expanded on an ongoing basis. With the digital companion, naturally spoken instructions can now be used to regulate the air conditioning, open and close the windows or change the driving experience switch modes, for instance. It can also access the new News app, which reads out the latest news to passengers, and learn routines that increase comfort and driving pleasure in certain situations.

Remote Software Upgrade and BMW Drive Recorder
BMW Operating System 7 now also includes Remote Software Upgrade. This means that the BMW X3 M Competition and the BMW X4 M Competition always remain up to date with the latest software. Possible upgrades are varied and can include different content, from new services to improved vehicle features – all of which can be loaded “over-the-air”.

New control island from the current BMW M3 and M4 models
Originating from the current BMW M3 and M4 models, the newly designed control island on the centre console includes two new buttons in addition to the specific M gear selector with Drivelogic rocker switch: the BMW Controller and the red engine start button. The set-up button provides direct access to all settings options for the engine and suspension. Two individually configured variants of the M set-up can be permanently stored and retrieved at any time using the two M buttons on the steering wheel. The M Mode button can be used to influence the activities of the driver assistance systems as well as the displays in the instrument cluster and in the Head-Up Display at the touch of a button.

Driving Assistant Professional available for the first time
The BMW X3 M Competition and the BMW X4 M Competition come with all the modern driver assistance systems of the BMW X3 and BMW X4. In addition to the Driving Assistant, the Driving Assistant Professional is available as an option for the first time. It includes Active Cruise Control with improved functionality in the city, intersection warning with additional city braking function, emergency lane assistant and the improved steering/lane guidance assistant. The 3D environment visualisation in the instrument cluster provides an overview of which Driving Assistant Professional assistance systems are activated and what functions they offer. The optional Parking Assistant Plus now also includes the reverse assistant, which helps retrace a completed line in reverse. Parking Assistant Plus uses Park View, Panorama View and 3D Top View to create a 360-degree image of the vehicle and its surroundings from various perspectives. Meanwhile, the driver can have a three-dimensional live image of their vehicle and its surroundings transmitted to their smartphone by means of Remote 3D View.

High-fives all round – Kia UK achieves another record-breaking month