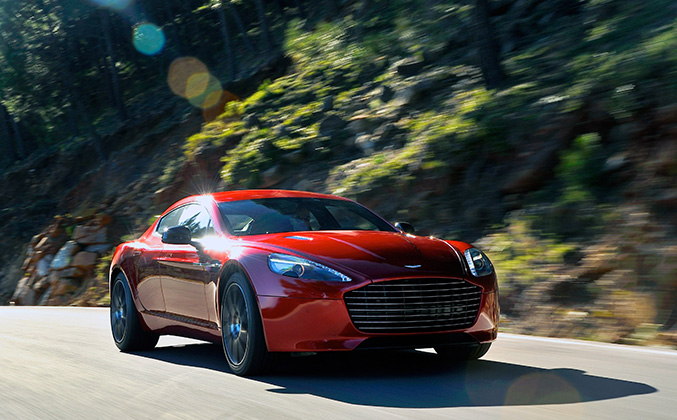 Aston Martin Rapide S is making its debut with yet more luxury and yet more power on offer in its quintessentially elegant four-door silhouette.

The iconic British car maker’s new luxury GT has been sympathetically redesigned andpainstakingly re-engineered to reassert its position as the world’s most beautiful, and beautifully balanced, four-seat sports car.Aside from the extensive design and engineering improvements, the luxurious new Rapide S – which replaces the outgoing Rapide in markets worldwide – is now even more refined thanks to a range of additions to the four-seater’s sumptuous interior.

Still instantly recognisable as an Aston Martin, of course, the new Rapide S now boasts an imposing and assertive new ‘face’, created by virtue of the impressive and striking new full grille. 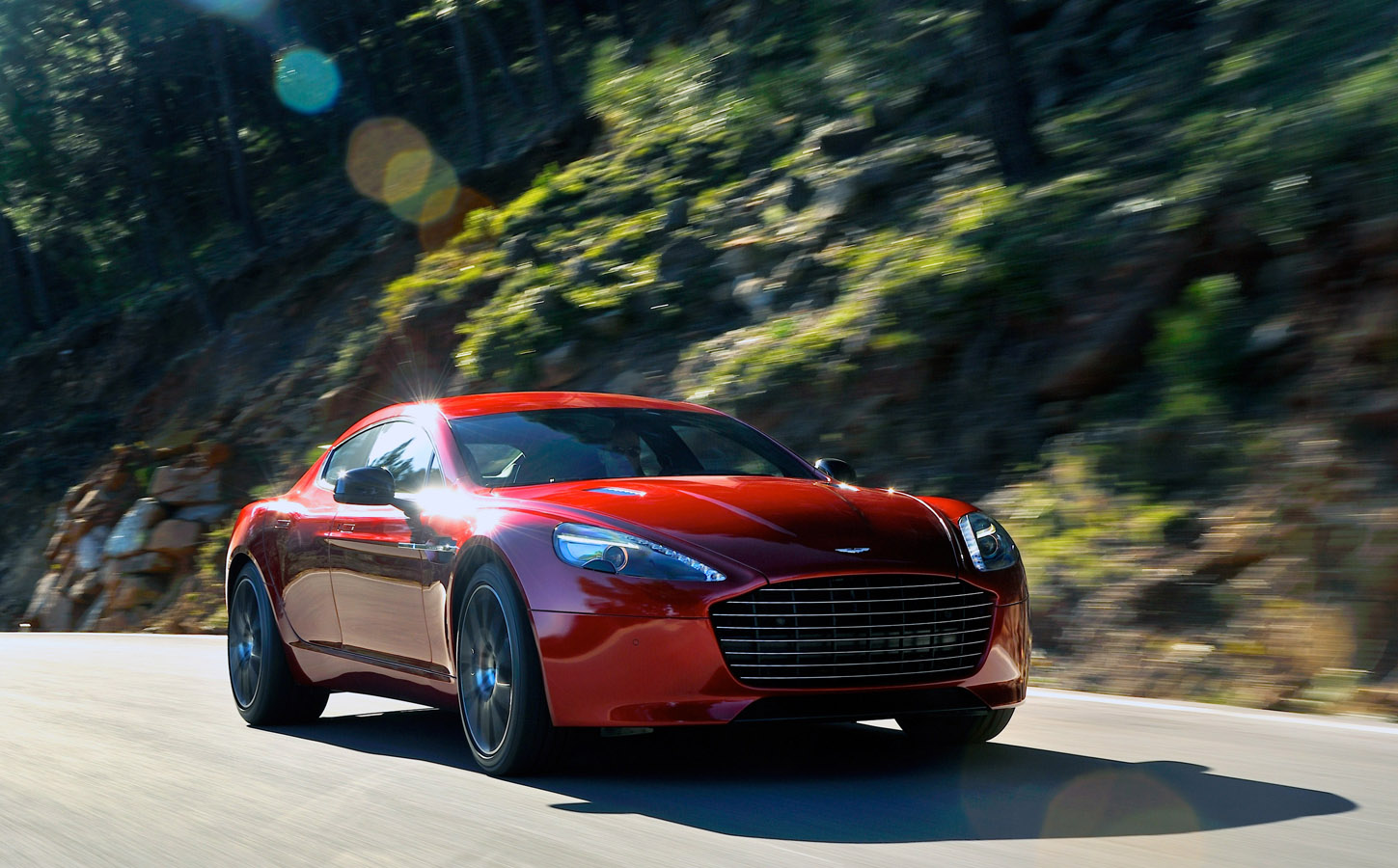 Imbuing the new car with an even more sporting, forceful demeanour, the revised front end design is matched at the back by a striking new rear deck profile which includes a more pronounced boot lid ‘flip’. The aerodynamic and aesthetic upgrades both reinforce the sporting nature of new Rapide S and work to counteract lift at higher speeds.

Aston Martin Chief Executive Officer, Dr Ulrich Bez said: “The Rapide S is to me, without doubt, the most beautiful four-door sports car on the market today. This is, very clearly, the power of luxury in action.

“The car’s stunning visual appeal is now matched by a much more powerful and yet more efficient engine – our exceptional new AM11 V12 – which increases massively both the excitement and performance potential of the Rapide S.

“It is a four-door sports car that uniquely combines luxury, style and sporting excitement in Aston Martin’s most flexible and accommodating silhouette. Purity of proportion and exceptional elegance are mixed with truly sensational dynamic performance – this is the four-door sports car in its most versatile form and I am sure our customers around the world are going to love it!”

Changes under the new Rapide’s skin are comprehensive, with a version of the new AM11 naturally-aspirated 6.0-litre V12 powerplant delivering unprecedented power and improved in-gear acceleration.

Peak torque increases, too, up from 600 Nm to 620 Nm at 5,000 rpm. Meanwhile an even more marked improvement in torque occurs lower down the rev range, as pulling power rises by more than 40 Nm between idle and 4,000 rpm with an additional 50 Nm available at 2,500 rpm.

Naturally, increases in power and torque lead to even swifter performance as befits a four-door sports car. New Rapide S shaves 0.3 seconds off its 0-62 mph time, which drops from the 5.2 seconds of the current car to just 4.9 seconds for the new model. Top speed climbs, meanwhile, to 190 mph.

Dual variable camshaft timing, knock sensing, even the fully catalysed stainless steel exhaust system – these are all engineering advances developed to preserve the V12’s position as a mainstay of the Aston Martin range.

The engine is now even more efficient, too. Despite the very significant increase in peak power and torque, the Rapide S is appreciably more economical than before. CO2 emissions drop by seven per cent – from 355 g/km to 332 g/km – while fuel economy now stands at 19.9 mpg on the official EU combined cycle.

A product of the latest generation of Aston Martin’s world-renowned VH engineering philosophy, which debuted in 2003, the new car of course benefits from many elements of the current Gen4 VH architecture.

The carefully conceived engineering changes continue as the new Rapide now offers even sharper agility and even quicker responses to driver input. The new AM11 engine – a key Gen4 component – has been lowered by 19 mm versus the position of the powerplant in the previous car, with a corresponding reduction in the sports car’s centre of gravity.

The changes also lead to a tangible improvement in front end turn-in – no mean feat for a car that was already acknowledged as a leader in dynamic performance.

Aston Martin engineers at the company’s global HQ in Gaydon have worked to revise the car’s dynamic stability control (DSC) in line with its significant increases in both power and torque.

As befits the more sporting nature of new Rapide S the car benefits from the latest Gen4 iteration of Aston Martin’s hi-tech Adaptive Damping System (ADS). The system now offers three distinct settings: ‘Normal’, ‘Sport’ and ‘Track’, with the character of each being tailored to the nature of Rapide S.

The ADS automatically alters the suspension settings to ensure the driver has high levels of control at all times, with the ability to respond quickly to different driving conditions. The different damping modes help to significantly broaden the character of the Rapide S, adapting its set-up to suit the driver’s precise requirements. Thus it can be a luxurious GT car in Normal mode with the capacity to morph into a more assertive sports car in Sport and Track modes.

The damper settings are determined by an electronic control unit which takes sensor readings from the car’s systems, including throttle position, brake position, steering wheel rotation and vehicle speed. This data establishes the prevailing driving conditions and the demands the driver is making on the car.

Head of Product Development at Aston Martin, Ian Minards, explains: “Growing the power in a luxury sports car is all very well, but maximising control and ‘usability’ of that increased power is, just as much, the engineers’ challenge.

“Balance, poise and control are the keys to a successful sports car and the dynamic improvements we have made with Rapide S showcase our efforts to make this not just the most beautiful, but also the most beautifully balanced, car in its class.”

He added: “Transmission calibration, ADS refinement, braking capability and engine output optimisation are among the many ‘ingredients’ which the team here at Gaydon have used to create a sports car of unerring quality and excitement.”

The patent-pending design – which features a unique ‘keystone’ construction – enables the grille to move rearwards on impact, whilst the central and outboard chin stiffeners give rigidity to the lower structure and support achievement of the leg impact regulations. Cut-outs on the front wing catwalks contribute to the achievement of the headform regulation.

The solution means Aston Martin can remain true to its design ethos, and avoid the use of plastic grilles and nose cone bumpers that stretch up in front of the bonnet.

As luxurious as it is thrilling, the new car now boasts a host of new luxury- or sports-orientated options, allowing buyers to more precisely tailor the car to their specific style.

More pronounced luxury, on the other hand, comes from the new piano black interior pack that adds a deep, rich, mirror-like shine to the facia, transmission tunnel centre plate and door handles of the Rapide S. A darker surround in the instrument binnacle and steering wheel with black horn-push surround round off the pack’s sumptuous additions. Luxurious blend headlinings in either tan or grey emphasise the luxury still further inside. 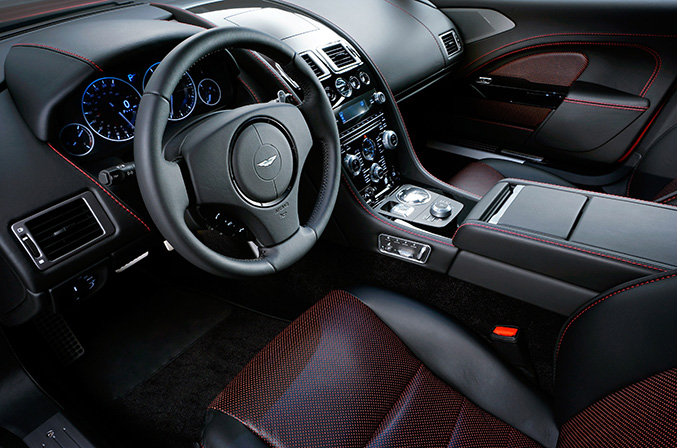 As would be expected of a modern Aston Martin, handcrafting is the order of the day in the Rapide S with the standard-fit pure glass transmission selector switches in the centre console one small yet important example of the truly authentic, bespoke, nature of the car’s cabin.

However those with a desire for a more sporting ambience in their sports car will not be disappointed. Optional duotone perforated red and black leather makes its Aston Martin debut here – delivering a captivating visual combination that’s unique to the new Rapide S.

Luxury is enhanced by the removal of extraneous ‘noise’ and the enhancement of desirable ‘sound’ – a fine distinction but one that helps the new car deliver an aural experience like no other. Improved NVH (noise, vibration and harshness) characteristics are derived from the likes of the new bonnet lining and revised windscreen cowl.

Flexibility comes in the form of four seats – the rearmost two capable of accommodating adults in a uniquely sporting setting – while at the touch of a button the individual back seats fold down to almost triple the Aston Martin’s load space.

Options to further enhance the luxurious look and feel of the Rapide S include, subject to market, a reversing camera and twin screen rear seat entertainment system with wireless headphones, remote control and six-disc DVD changer.

Those seeking the ultimate in luxury and personalisation can also consider the ‘Q by Aston Martin’ service which offers uniquely-tailored options for individualisation. The Q service focuses on fashioning colour and materials with limitless boundaries precisely to customer choice and specification, enabling owners to give free rein to the creativity and indulge their desire for bespoke luxury.

The new Aston Martin Rapide S will be available to order through the brand’s 146 dealers worldwide next month with prices confirmed closer to the on-sale date.

A Guide To Taking Your Trailer On Holiday