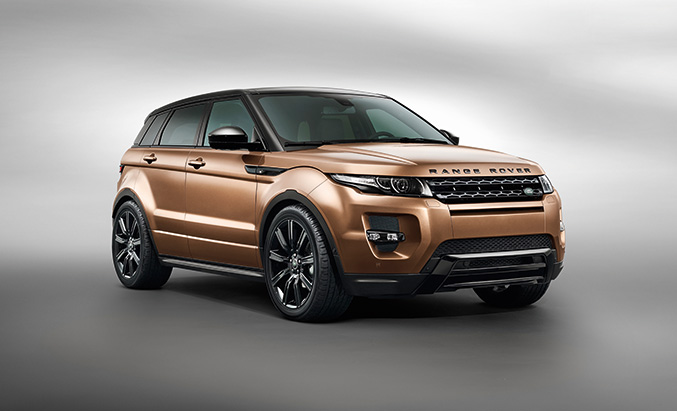 A chauffeur-driven 14MY Range Rover Evoque was a suitably stylish way for some of Land Rover’s famous European brand ambassadors to arrive at the Frankfurt motor show, but the VIP guests were in for a more dramatic journey from the airport than they ever expected. Hidden camera footage has been released that shows their reactions when, without warning, their vehicles left the highway for an extreme off-road “shortcut”.

What the passengers didn’t know was that this was all part of a plan to demonstrate just a little of the Evoque’s genuine all-terrain capabilities. Their route featured a series of hazards no ordinary limousine or taxi could contemplate: side inclines, steep gradients, loose surfaces and even a pyramid of pallets were among the challenges the Evoque – a standard showroom-specification 14MY model – took in its stride.

The updated Evoque features the ZF-9HP automatic transmission is among the world’s first 9-speed units fitted to a passenger car.  With a wide spread of ratios and improved efficiency, the new transmission delivers improved economy, reduced emissions, enhanced performance and greater comfort.  Available as an option, Active Driveline, is the world’s first ‘on demand’ four-wheel drive system which enhances agility and improves fuel efficiency by operating in front-wheel drive only.

The new system monitors vehicle dynamics and automatically reconnects four-wheel drive (within 300 milliseconds) whenever it is needed. For the 2014 model, the driver assistance capabilities of Evoque are significantly enhanced by the introduction of several new features.

The film footage has been spliced into a video mash-up that has gone live on Land Rover’s social media channels, global website and Evoque micro-site this week, with versions dedicated to the ambassadors’ home markets. The movies show the Evoque in action, as well as the surprised reactions of the passengers on board, under the banner “there’s more than one way to take on the city”.

As well as the fun, there is a serious message, too, about how Range Rover Evoque matches world-acclaimed design with the kind of all-terrain performance that is at the heart of every Land Rover.

“Our brand ambassadors all share Land Rover’s spirit of adventure, but none of them was prepared for what was in store in an everyday drive across Frankfurt.  We had a lot of fun making the films, but at the same time we have been able to demonstrate in a unique location that the Evoque is much more than one of the world’s most stylish vehicles, it’s also a genuine Land Rover with the legendary handling and performance that define the brand,” said Land Rover Global Brand Director, John Edwards.

MTM S8 Biturbo Powerplay with the comfort of a saloon

The Audi A3 Sedan is ready for launch