Starting in the autumn of 2012, BMW will be sending out highly attractive signals in the areas of sportiness, versatility and efficiency with new engine variants and equipment features for the latest models within the compact and midrange segments. For the very first time, the intelligent four-wheel drive system BMW xDrive will be available for the BMW 1 Series. Furthermore, the remarkably economical BMW 114d will be making its debut. The BMW 320i EfficientDynamics Edition Sedan will be available as the first petrol-driven model with additionally enhanced technology for reducing fuel consumption and exhaust emissions. In future, there will be a choice of four diesel and two petrol engines for the new BMW 3 Series Touring. Latest additions to the vehicle range are the models BMW 320i Touring, BMW 318d Touring and the BMW 316d Touring.

At market launch of the new BMW 3 Series Touring, the new generation of the navigation system Professional will be offered as an option. The comprehensively developed system, which now comprises among other things three-dimensional graphic representation for all menu displays, further optimised operational comfort and speech recognition designed for use with all Office functions is also being simultaneously introduced for the new BMW 3 Series Sedan in the autumn of 2012. Also new for the BMW 3 Series: The Active Protection option now also includes the Attentiveness Assistant. 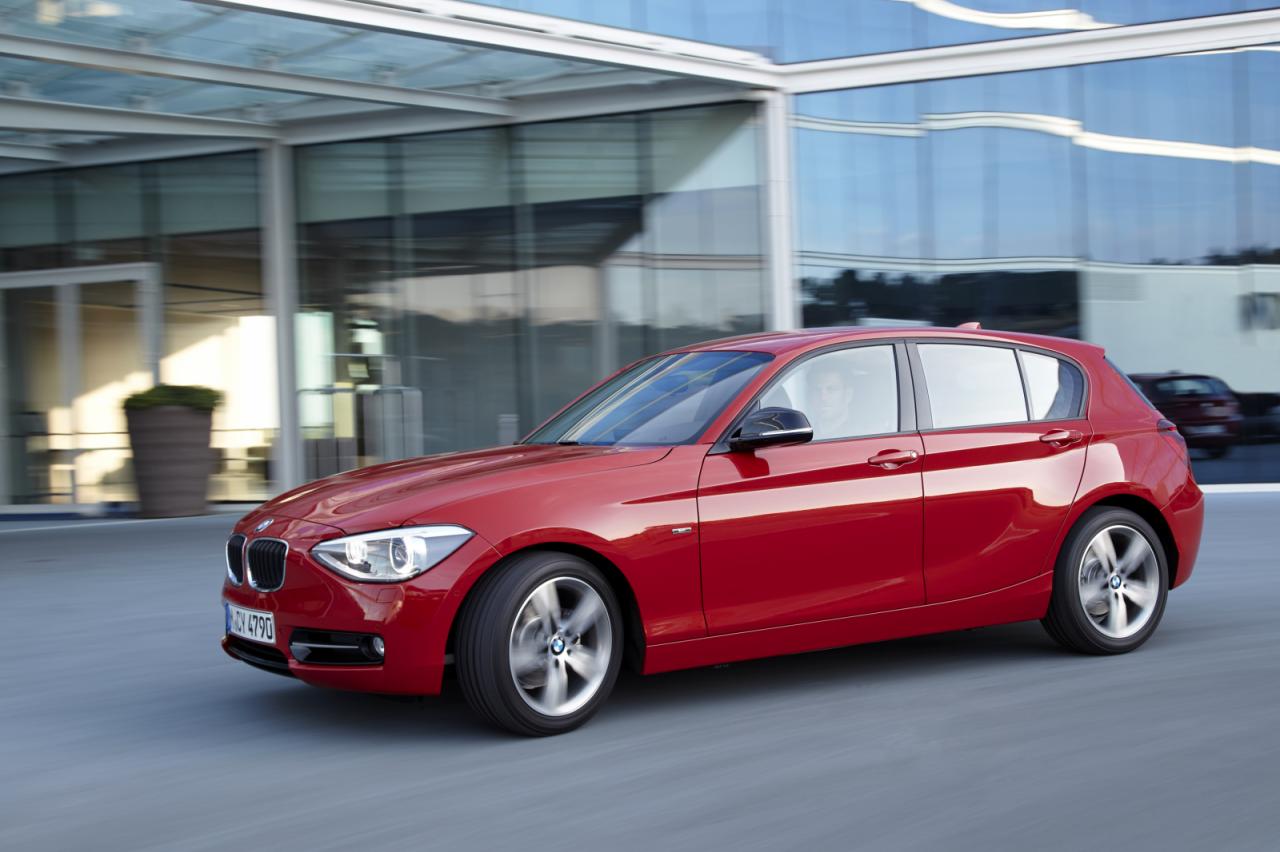 Furthermore, the number of BMW Models that conform with EU6 exhaust emission requirements will increase. As early as in the autumn of 2012, further model variants of the BMW 1 Series and the BMW 3 Series as well as the BMW X1 will comply with this classification due to come into effect as from 2014.

Intelligent four-wheel drive BMW xDrive guarantees optimised stability, maximum traction and a noticeable increase in sportiness. Electronically controlled power distribution between the front and rear wheels also ensures supreme handling characteristics even in adverse weather and road conditions as well as the highest level of precision and agility when taking bends at high speeds.  This system is available for the first time for the BMW 1 Series.

−   xDrive is being offered both for the five-door and the three-door BMW 1 Series, each in two model variants. Featured in the BMW 120d xDrive, it distributes the power of a 135 kW/184 hp four-cylinder diesel engine between the front and rear wheels. This interaction facilitates acceleration from 0 to 100 km/h in 7.2 seconds and a top speed of 225 km/h. Average fuel consumption of the BMW 120d xDrive is between 4.7 and 4.8 litres per 100 km and the CO2 emission level between 123 and 126 grams per km (figures as per the EU test cycle, depending on selected tyre format).

The four-wheel drive system forms an integral part of an exceptionally fascinating combination in the compact segment’s first BMW M Performance automobile. The interaction between xDrive and the 235 kW/320 hp straight six-cylinder petrol engine featured in the BMW M135i xDrive ensures an exceptionally high level of dynamics, traction and stability. The BMW M135i xDrive, which comes as standard with an eight-speed automatic transmission, sprints from a standstill to 100 km/h in a mere 4.7 seconds. Top speed is electronically limited to 250 km/h. The BMW M135i xDrive combines outstanding sportiness and handling supremacy with an average fuel consumption of 7.8 litres/100 km and a CO2 emission level of 182 grams per km in the EU test cycle.

−   The range of diesel engines available for the BMW 1 Series is also being further extended as from the autumn of 2012. The new BMW 114d assumes the position of a remarkably economical entry version. The new model is powered by a 1.6-litre version of the four-cylinder diesel engine with BMW TwinPower Turbo Technology. The engine features a supercharging system with variable turbine technology and Common Rail direct fuel injection with solenoid valves operating with a maximum pressure of 1,600 bar. It delivers its maximum power output of 70 kW/95 hp at 4,000 rpm and maximum torque of 235 Nm between 1,500 and 2,750 rpm. This facilitates acceleration from 0 to 100 km/h in 12.2 seconds and a top speed of 185 km/h. Average fuel consumption is between 4.1 and 4.3 litres/100 km, with respective CO2 emissions being between 109 and 112 grams per km (levels as per the EU test cycle, depending on selected tyre format).

Like all other model variants of the new BMW 1 Series, the new BMW 114d is also equipped as standard with comprehensive BMW EfficientDynamics technology. The package comprises among other things brake energy regeneration, shift point indicator, Auto Start Stop function, electronic power steering, on-demand ancillary components and tyres with reduced rolling resistance.  Moreover, the new BMW 114d features the ECO PRO mode, which can be activated by means of the Driver Experience Control switch fitted as standard, facilitating both a relaxed and economical driving style.

Like the two four-wheel drive models, the BMW 114d is being simultaneously introduced both as a five-door and a three-door version. The new three-door BMW 1 Series is being launched parallel to the BMW 120d and the BMW 118i, which both feature rear-wheel drive. Therefore, there is now a choice of five petrol and six diesel power units for the two compact models.

The new entry model in the series offers a further particularly economical way of experiencing the new BMW 3 Series Sedan’s fascinating charisma and promise of driving pleasure. The new BMW 316i Sedan is also powered by a 1.6-litre, four cylinder petrol engine with BMW TwinPower Turbo Technology, mobilising a maximum power output of 100 kW/136 hp and a maximum torque of 220 Nm. Power transfer is effected by a six-speed manual transmission featured as standard, an eight-speed automatic transmission being offered as an option. The BMW 316i Sedan takes just 8.9 seconds to accelerate from 0 to 100 km/h (automatic: 9.2 seconds), top speed of both variants being 210 km/h. This model also combines a sporting temperament with exemplary efficiency. In the EU test an average fuel consumption of 5.8 to 5.9 litres/100 km and a CO2 emission level of 134 grams to 137 grams per km were ascertained for either of the transmission variants (identical figures both for manual and automatic transmission, depending on selected tyre format).

Immediately following the European market launch, the engine portfolio of the new BMW 3 Series Touring is also being extended. The BMW 328i Touring with 180 kW/245 hp, which was already available from the start, is now being complemented by a second petrol-driven variant – the 135 kW/184 hp BMW 320i Touring, which also fulfils the EU6 emission standard. The range of diesel models, which previously comprised the BMW 330d Touring with 190 kW/258 hp and the BMW 320d Touring with 135 kW/184 hp, is being supplemented by the BMW 318d Touring and the BMW 316d Touring. The new models are all fitted with a six-speed manual transmission as standard, with the option of an eight-speed automatic transmission for each model.

The 2-litre engine featured in the new petrol-driven model is also equipped with BMW TwinPower Turbo Technology, maximum torque being 270 Nm. The new BMW 320i Touring accelerates from 0 to 100 km in 7.5 seconds and has a top speed of 233 km/h (automatic: 228 km/h). With average fuel consumption between 6.1 and 6.2 litres/100 km and CO2 emission between 143 and 145 grams per km, levels are even lower in conjunction with the automatic transmission than those of the model with a manual transmission, which are between 6.4 litres and 6.5 litres/100 km and between 149 and 152 grams per km (figures as per the EU test cycle, depending on selected tyre format).

Adapted to suit each version of the BMW 318d Touring and the BMW 316d Touring, a 2-litre, four-cylinder diesel engine featuring BMW TwinPower Turbo Technology ensures a precise and economical fuel supply resulting in spontaneously delivered tractive power. The engine under the bonnet of the new BMW 318d Touring delivers 105 kW/143 hp and a maximum torque of 320 Nm, the BMW 316d Touring mobilising 85 kW/116 hp and 260 Newton metres of torque.

In both transmission versions, the new BMW 318d Touring has identical acceleration from 0 to 100 km/h in 9.2 seconds and a top speed of  210 km/h. Fuel consumption and emission levels are also the same, these being  between 4.5 and 4.7 litres/100 km and 119 and 123 grams per km respectively (figures as per the EU test cycle, depending on selected tyre format).

The optionally available navigation system Professional is one of the most attractive ways to enhance the experience of driving the new BMW 3 Series. The new generation of the system is, thanks to an exceptionally powerful processor, even faster, offering additional functions for route representation and fascinating at first sight with three-dimensional graphics in brilliant resolution for all menu displays. The new navigation system Professional has been presented for the first time in the new BMW 7 Series and has meanwhile become available for the BMW 5 Series. It is available at market launch for the new BMW 3 Series Touring and will be on offer for the new BMW 3 Series Sedan as from the autumn of 2012.

The directly selectable function bar for fast changing of map displays as well as for spontaneous access to weather information and Real Time Traffic Information is one of the features designed to ensure further optimised operational comfort. Furthermore, split-screen representation now also offers the possibility to display High Guiding information with detailed representation of road junctions, including an accurate direction guidance by means of the Lane Guiding feature. In addition, the display of 3D city models ensuring maximum orientation in city traffic by means of perspective and realistic imaging of streets and buildings has also been upgraded.

Furthermore, a new speech recognition function has been added to the Mobile Office Services by BMW ConnectedDrive accessible using the new generation of the navigation system Professional. Previously, it was possible to display calendar entries, text messages (SMS, e-mail) tasks and memos on the on-board monitor and have them read out via speech output (Text to Speech). Consequently, the driver was able to get messages and information synchronised inside the car without being significantly distracted from the job of driving. The current innovation consists of a dictation function that simply writes down the spoken word by means of speech recognition. A text that has been created in this way can then be sent via SMS or e-mail.

Likewise, voice memos of up to two minutes in length can be recorded and sent per e-mail as a written text or saved to hard disk. Moreover, the new and more efficient speech recognition function renders the operation of virtually all functions offered by the BMW navigation system Professional even easier more comfortable, faster and above all safer.

Moreover, the number of models that already conform with the EU6 emission requirements coming into effect in 2014 will continue to increase further in the autumn. For example, the BMW 125i, both in the 3-door and 5-door versions, will in future also comply with this stringent classification. In the BMW 3 Series two additional engines offer the required optimised emission behaviour. The Sedan and Touring versions of the BMW 328i and the BMW 320i are both ready for the EU6 exhaust emission standard. From the autumn of 2012, the same will apply to all petrol versions of the BMW X1.