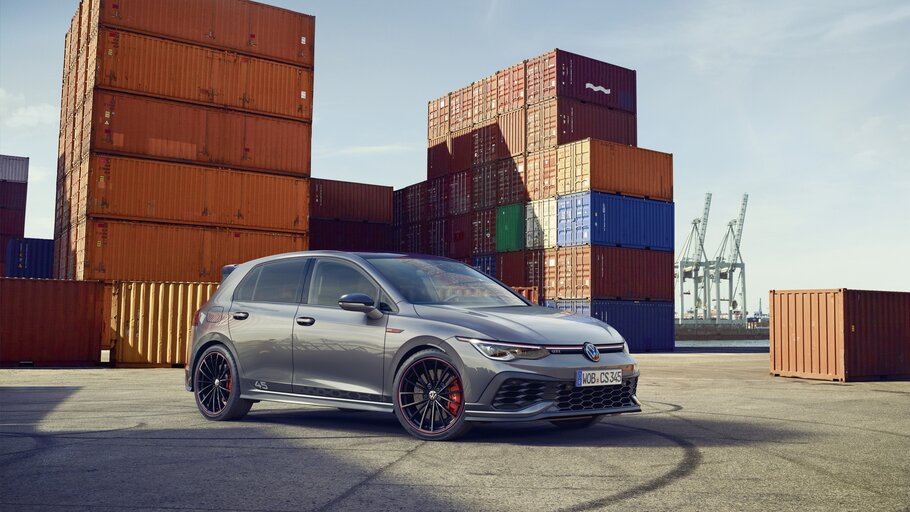 The recipe is simple, but effective – Volkswagen takes the Golf GTI Clubsport, with its 5.6-second sprint to 62 mph, 300 PS and 400 Nm of torque, removes the speed limiter to facilitate a top speed of 166 mph (where permitted), and adds an Akrapovič titanium sports exhaust system to augment the car’s engine note, save weight and improve exhaust flow. The already sporty aesthetic of the GTI Clubsport is given additional assertiveness with a set of dynamic 19-inch ‘Scottsdale’ alloy wheels, which feature a high-gloss black finish and a Tornado Red pinstripe around the rim. The car’s special status is further marked out by ‘45’ lettering on the side sill panels, and a metallic black finish to the door mirror covers and upper part of the spoiler.

Inside, GTI lettering appears on the backrests of the front sports seats, while the ‘45’ emblem features in the centre spoke of the steering wheel – a constant reminder to the driver that they are driving a part of hot hatchback history. Artvelours fabric in the door panels and a leatherette arm support add further sporting luxury to the interior of the model.

These tweaks combine to create the latest in a six-generation string of subtly tweaked but historically prominent special edition Golf GTI anniversary models, which started with the Golf GTI Mk III 20th Anniversary Edition in 1996, and continued every five years covering the Mk IV, Mk V and Mk VI Golfs in 2001, 2006 and 2011 respectively. For the Golf Mk VII, the model gained special, limited-edition Golf GTI Clubsport and Clubsport S variants for the GTI’s 40th anniversary.

Performance for this new special edition remains the same as that of the acclaimed GTI Clubsport – outputs of 300 PS and 400 Nm of torque translate into acceleration to 62 mph from standstill of 5.6 seconds. The Clubsport 45 achieves fuel economy of 37.7 mpg on the combined WLTP test cycle, with CO2 emissions of 169 g/km.

In addition to stellar performance, the Clubsport 45 retains all of the built-in agility of the Clubsport, thanks to the model’s Vehicle Dynamics Manager working in combination with electronically controlled running gear, including an electromechanical front-axle locking differential and XDS electronic differential lock. This eliminates the understeer often associated with front-wheel drive cars. This is complemented by a larger braking system, and can be further optimised with the addition of the optional Dynamic Chassis Control (DCC) adaptive damper system.

The Golf GTI Clubsport 45, as the pinnacle of the Golf GTI range, also has a wealth of equipment included as standard, in addition to its assertive looks, entertaining drive, impressive performance and illustrious history. The model comes equipped with such highlights as Volkswagen’s acclaimed Digital Cockpit Pro – a 10.25-inch, high resolution TFT dash display screen with customisable menus and information; IQ.Light LED Matrix headlights with different modes for diverse driving conditions and situations; Travel Assist, facilitating Level 2 semi-automated driving at speeds of up to 130 mph (where legal); the Car2X vehicle communication system, which communicates with other Car2X-equipped vehicles nearby for advance warning of hazards and other road obstacles; and the GTI Clubsport’s uniquely styled bumpers and performance rear spoiler, which in addition to their aesthetic benefits, improve aerodynamics and downforce of the car to sharpen the model’s already dynamic drive. For a comprehensive overview of the GTI Clubsport’s extensive equipment, details can be found in the Golf price list via volkswagen.co.uk.

Lisa Hartley, Golf Product Manager at Volkswagen UK, said: “The Golf GTI Clubsport 45 celebrates 45 years of the Golf GTI in style. It’s the latest in a long line of GTI anniversary special editions, and offers a greater level of dynamic engagement and agility than ever before.

“The Clubsport 45 is a piece of Volkswagen heritage in motion – the latest chapter in the ongoing Golf GTI story, 45 years –and counting – in the making. It is no exaggeration to call the GTI an automotive icon.”