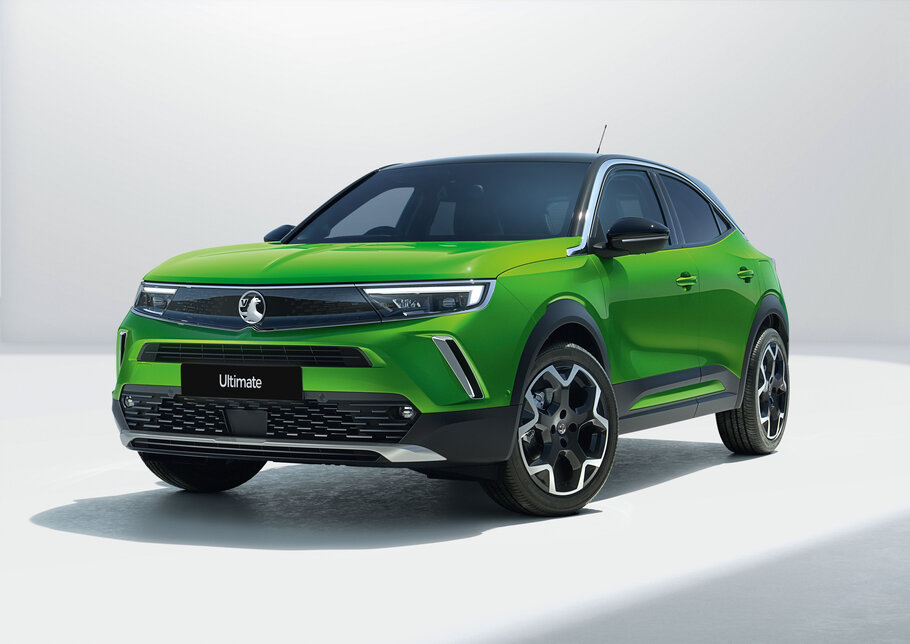 Vauxhall has updated both the Corsa and Mokka model ranges by introducing its new simplified version line-up as well as enhanced pricing making two of its most popular models more appealing than ever. With orders open from early April, the revised Corsa model range will start from £17,340 OTR and the Mokka from £22,265 OTR, with first customer deliveries expected from August.

Design – features Vauxhall’s ‘Bold and Pure’ styling and driver assistance tech
GS Line – combines striking sports styling, inside and out, with advanced comfort and convenience technology
Ultimate – combines an evolution of the GS Line styling with even more premium technologies

The new three version line-up is designed to make it easier than ever for customers to choose the right version for them.

Innovative technology at an affordable price – a number of versions have been substantially reduced in price (by up to £3,290) meaning that premium technology is even more accessible than before.

The new trim line-up has also enabled Vauxhall to streamline the overall number of Corsa and Mokka variants available to customers, making it more transparent to understand the differences between vehicles. The Corsa model range has been streamlined from 15 models to eight, while the Corsa-e has been reduced from three models to two. Mokka sees the version line-up reduced from 16 to 11, while Mokka-e will go from four to two.

Adam Wood, Marketing Director, Vauxhall, said: “We’ve introduced our new simplified trim structure to the Corsa and Mokka vehicle ranges. In doing so, we’ve not only made it easier for buyers to understand the key differences between various trims, but the models are now even better value thanks to a number of pricing enhancements. The top-spec Corsa Ultimate has been reduced by more than £3,000 meaning that premium innovative technology is now even more accessible on one of Britain’s most popular cars.”

Corsa-e models will now come standard with Vauxhall’s e-toggle shifter already available on the Mokka-e, replacing the previous ‘cobra’ shifter. The new control allows drivers to select between reverse, neutral and drive, while a Brake (B) button allows drivers to increase energy recovery via the regenerative braking technology.

The Corsa-e features a 50kWh battery connected to a 136PS (100kW) electric motor and is capable of up to up to 222 miles on a single charge under WLTP testing. Supporting up to 100kW rapid charging, an 80% charge takes just 30 minutes.

As part of its electric vehicle strategy, Vauxhall has worked to ensure Corsa-e variants are more cost efficient to own in the long run over petrol and diesel variants of the Corsa – helping owners offset the higher initial purchase price.

Corsa was the UK’s best-selling new car in 2021 with more than 40,000 models sold. From April, Corsa Design models replace previous SE Edition variants and feature the same equipment and technology, including Automatic Emergency Braking, Lane Keep Assist and Speed Sign Recognition, as well as Apple CarPlay™ and Android Auto™ and a 7-inch infotainment screen. Prices for Corsa Design variants start from £17,340 OTR, resulting in a £500 price reduction over the outgoing model.

Mokka & Mokka-e
The Vauxhall Mokka was the first model to feature Vauxhall’s new ‘Vizor’ front end and Pure Panel interior – features since seen on all new Vauxhall models, including the All-New Astra. The 100% electric Mokka-e is available in GS Line and in Ultimate models, with both models priced equally to their outgoing variants.

As with Corsa-e, Vauxhall has worked to ensure the Mokka-e range achieves total cost of ownership savings for owners over its petrol and diesel counterparts.

The updated Corsa and Mokka range will be available to purchase from April onwards. The entire Vauxhall passenger car range can be ordered entirely online via the Vauxhall Online Store. The Vauxhall Online Store brings the brand’s showroom experience straight into the comfort of buyers’ homes. Customers can arrange a live video viewing of their vehicle via the Vauxhall Virtual Showroom and proceed to the Online Store to configure their vehicle, personalise finance payments, and place an order, all from the comfort of their home.