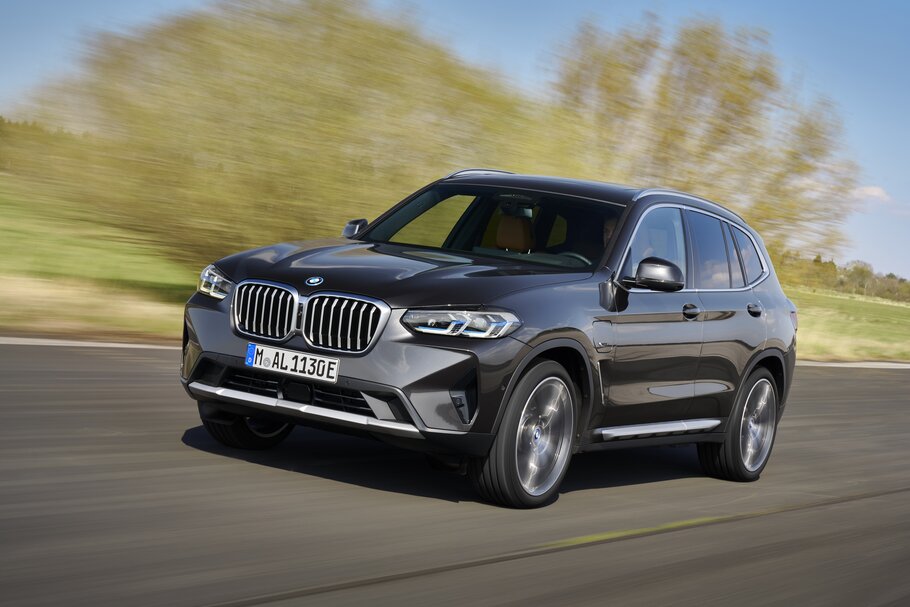 BMW has enhanced its BMW X3 and BMW X4 models with a comprehensive refresh that includes sportier styling together with modern interiors, new equipment and updated infotainment.

The strongest visual aspect of the enhancements is the redesigned front and rear section which, in the latest third-generation of the BMW X3, accentuates the robust Sports Activity Vehicle appearance. Its Sports Activity Coupé counterpart, the second-generation BMW X4, adopts the new front design and adds its own accentuation with the BMW mesh kidney grille and dynamic rear-end styling.

Both model ranges are topped with M40i and M40d variants, which are even more dynamic when specified in Pro Edition trim. X3 customers can choose between xLine or M Sport trim on other versions, while BMW X4 customers benefit from M Sport trim as standard.

Both the X3 and X4 include enhanced equipment such as the BMW Live Cockpit Professional with 12.3-inch Control Display and automatic air conditioning with three-zone control. X3 xLine models also include sports seats with upholstery featuring a new generation of Sensatec in the new Ray grain.

The UK market launch of the new BMW X3 and the new BMW X4 will get underway in September 2021, following the start of production at BMW Plant Spartanburg (USA) in August 2021.

New BMW kidney grille and flatter headlights
The BMW kidney grille is larger than before and now comprises a single-piece frame. A black bar, in which the iCam is positioned if fitted, provides visual separation of the grille. The frame is finished in pearlescent chrome and the grille bars in satin-finished aluminium. The front headlights, which are now about 10mm flatter, feature full LED technology as standard. As an option, darkened inserts in M Shadow Line lights can replace the light components in the headlights. Adaptive LED headlights are standard and BMW Laser Light with a range of up to 650 metres are available as an optional upgrade.

Eight paint finishes to choose from
Following the redesign of the BMW X3, BMW offers a total of eight paint finishes in the regular range, including the one non-metallic finish in Alpine White. Customers can enhance their paintwork further by choosing a special BMW Individual paint finish in Tanzanite Blue, which is available for xDrive30e, M40i and M40d models.

BMW mesh kidney grille as an exclusive distinguishing feature
As with the BMW X3, BMW has also significantly revised the front and rear sections of the BMW X4. The coupé completely adopts the new front end of the BMW X3 with headlights that are around 10mm flatter, along with the redesigned front apron and the enlarged, and more striking, BMW kidney grille. The BMW X4 features the mesh kidney grille, familiar from other sporty BMW models. The mesh-inserts are in satin-finished aluminium, while the frame is finished in pearlescent chrome as before. The adaptive LED headlights also come as standard.

Coupé silhouette and redesigned rear
The typical BMW proportions with long bonnet, flat windscreen and long wheelbase give the BMW X4 an elongated, sporty appearance. It is 55mm lower than the BMW X3, longer by 43mm and 27mm wider. Featuring full LED rear lights with a three-dimensional design, emphasising the vehicle width, the rear section now has an even more clear-cut shape.

The new rear apron looks neater, with an increased proportion of painted surface and reflectors now placed vertically and lower in the bumper. The wide free-form tailpipe trims echo the horizontal lines of the upper section.

High levels of standard equipment and new Sensatec upholstery on X3 xLine models The new BMW X3 and the new BMW X4 now welcome passengers into a significantly revised interior. The centre console in the two X models is drawn from the current BMW 4 Series. The free-standing, central Control Display with touch function now offers a screen diagonal of 12.3 inches as standard.

In order to increase seating comfort at the rear, the inclination of the rear-seat backrest, which has a 40:20:40 split as standard, can be individually adjusted in several stages via the cargo function. For increased functionality, the optional storage package includes an adaptive fastening system. The standard load volume of 550 litres can be increased to up to 1,600 litres in the BMW X3 and from 525 litres to a maximum of 1,430 litres in the BMW X4.

The energy obtained by means of recuperation and stored in the 48-volt battery is also used to supply the 12-volt electrical system and the electrically-operated vehicle functions connected to it. It can also be used to generate additional drive power. What’s more, the 48-volt starter generator can also create an electric boost of 11hp during hard acceleration, which is particularly helpful for overtaking.

The BMW X3 M40d and the BMW X4 M40d are even more powerful. Their BMW M Performance diesel engine generates a maximum output of 340hp and delivers a maximum torque of 700Nm from just 1,750rpm. As a result, acceleration from standstill to 62mph takes just 4.9 seconds, while the top speed is electronically limited to 155mph.

All diesel units feature BMW TwinPower turbocharging with variable turbine geometry and common-rail direct injection at maximum injection pressures of 2,500 to 2,700 bar. For emission control, BMW BluePerformance technology is on board with particulate filter, oxidation and NOx storage catalytic converter along with an SCR catalytic converter with AdBlue injection.

Plug-in hybrid with an electric range of more than 30 miles
The BMW X3 xDrive30e plug-in hybrid model features a four-cylinder petrol engine combined with an electric motor whose power is transmitted to all four wheels. Their joint system output of 252hp can be increased by up to 40hp by temporary use of the electric motor’s peak output. The BMW X3 xDrive30e takes just 6.1 seconds to accelerate from 0-62mph. It has a lithium-ion high-voltage battery that enables a range of up to 31 miles (WLTP).

BMW xDrive: precise power distribution with optimised efficiency
BMW xDrive all-wheel drive makes a significant contribution to the versatile sporty flair of the new BMW X3 and BMW X4. The latest edition of the system is lighter and more efficient. In addition, the precise electronic control of the intelligent all-wheel drive ensures the superb power distribution that is so typical of the brand. Its rear-wheel orientation makes hard cornering particularly exciting. In addition, BMW xDrive optimises both driving stability and traction over rough terrain.

High-quality suspension technology with an individual set-up
With their high-quality and specifically matched suspension technology, the BMW X3 and BMW X4 offer plenty of agility as well as a high level of ride comfort. All BMW X4s and BMW X3s from M Sport upwards are also fitted with variable sports steering as standard, in addition to the M Sport suspension. With the optional adaptive suspension, the electronically controlled dampers adapt to both road conditions and driving style. For either a sporty or comfortable basic set-up, there is a choice of two modes that can be activated using the driving experience switch.

Aerodynamic fine-tuning
With a drag coefficient of 0.29 and 0.30 respectively, the BMW X3 and BMW X4 boast the best levels in their segment. The reduction of air resistance not only helps reduce fuel consumption, it also offers benefits in terms of noise comfort. In addition to aerodynamically optimised vehicle proportions, the two models feature an enclosed underbody structure. Further aerodynamic measures include the roof spoiler and the active air flap control.

Assistance systems for enhanced comfort and safety
In refreshing the BMW X3 and BMW X4, BMW has reorganised and, once again, significantly expanded the range of modern driver assistance systems to enhance both comfort and safety. Standard systems include cruise control with braking function, as well as front collision warning with braking function for vehicles, pedestrians and cyclists.

Driving Assistant Professional is available for the first time as an option on M40d and M40i models, offering the driver enhanced comfort and safety. Parking Assistant Plus now also includes the reverse assistant, which helps retrace a completed line in reverse. Another new feature in the BMW X3 and BMW X4 is the optionally available BMW Drive Recorder, which takes video footage around the vehicle.

BMW Live Cockpit Professional with 12.3-inch display as standard
With BMW Live Cockpit Professional as standard and intelligent networking including innovative digital services based on BMW Operating System 7, the BMW X3 and BMW X4 now offer particularly close interaction between driver and vehicle. The driver can configure up to ten pages of live content on the Control Display in the main menu, each with two to four pads (tiles). What’s more, greater personalisation of content and displays is now possible, too. Digital services include the BMW Intelligent Personal Assistant, Connected Music and Remote Software Upgrade. The system includes the iDrive operating system and the addition of a 12.3-inch Control Display. BMW Head-Up display is also optionally available.

New generation of navigation with BMW Maps
One of the most important innovations in the area of digital services is BMW Maps. The cloud-based system enables significant performance improvement, a high degree of accuracy and simplified destination entry, as well as extremely fast route calculation.

In addition, BMW Maps with Connected Parking provides drivers with even more detailed support in the search for a vacant parking space near their destination, while Connected Charging helps find charging stations for the BMW X3 xDrive30e.

Apple CarPlay and Android Auto™. Deep integration of Amazon Alexa also makes it possible to use Amazon’s voice service inside the vehicle in the same way as the customer is already used to doing at home.

With Digital Key, BMW is the first car manufacturer to offer its customers the option of using the iPhone as a fully-fledged digital car key. The new BMW Digital Key allows customers to unlock and lock their BMW by holding their iPhone to the door handle, and they can start the engine simply by placing the smartphone in the wireless charging cradle and pressing the start button.

The My BMW app is available in more than 40 countries for both iOS and Android operating systems. As a new universal interface to the vehicle, it provides information about the vehicle’s condition at all times and also enables remote access functions.

Remote Software Upgrade updates “over-the-air”
Thanks to Remote Software Upgrade, the BMW X3 and BMW X4 also remain consistently up to date with the latest software. The upgrades can include content ranging from new services to improved vehicle functions and can be downloaded “over-the-air”, either via the My BMW app on a smartphone or directly into the vehicle via the SIM card installed in it.

*Fuel consumption, CO2 emission figures and power were measured using the methods required according to Regulation VO (EC) 2007/715 as amended. The figures are calculated using a vehicle fitted with basic equipment in Germany, the ranges stated take into account differences in selected wheel and tyre sizes as well as the optional equipment. They may change during configuration.

The BMW Group
With its four brands BMW, MINI, Rolls-Royce and BMW Motorrad, the BMW Group is the world’s leading premium manufacturer of automobiles and motorcycles and also provides premium financial and mobility services. The BMW Group production network comprises 31 production and assembly facilities in 15 countries; the company has a global sales network in more than 140 countries.

The success of the BMW Group has always been based on long-term thinking and responsible action. The company set the course for the future at an early stage and consistently makes sustainability and efficient resource management central to its strategic direction, from the supply chain through production to the end of the use phase of all products.