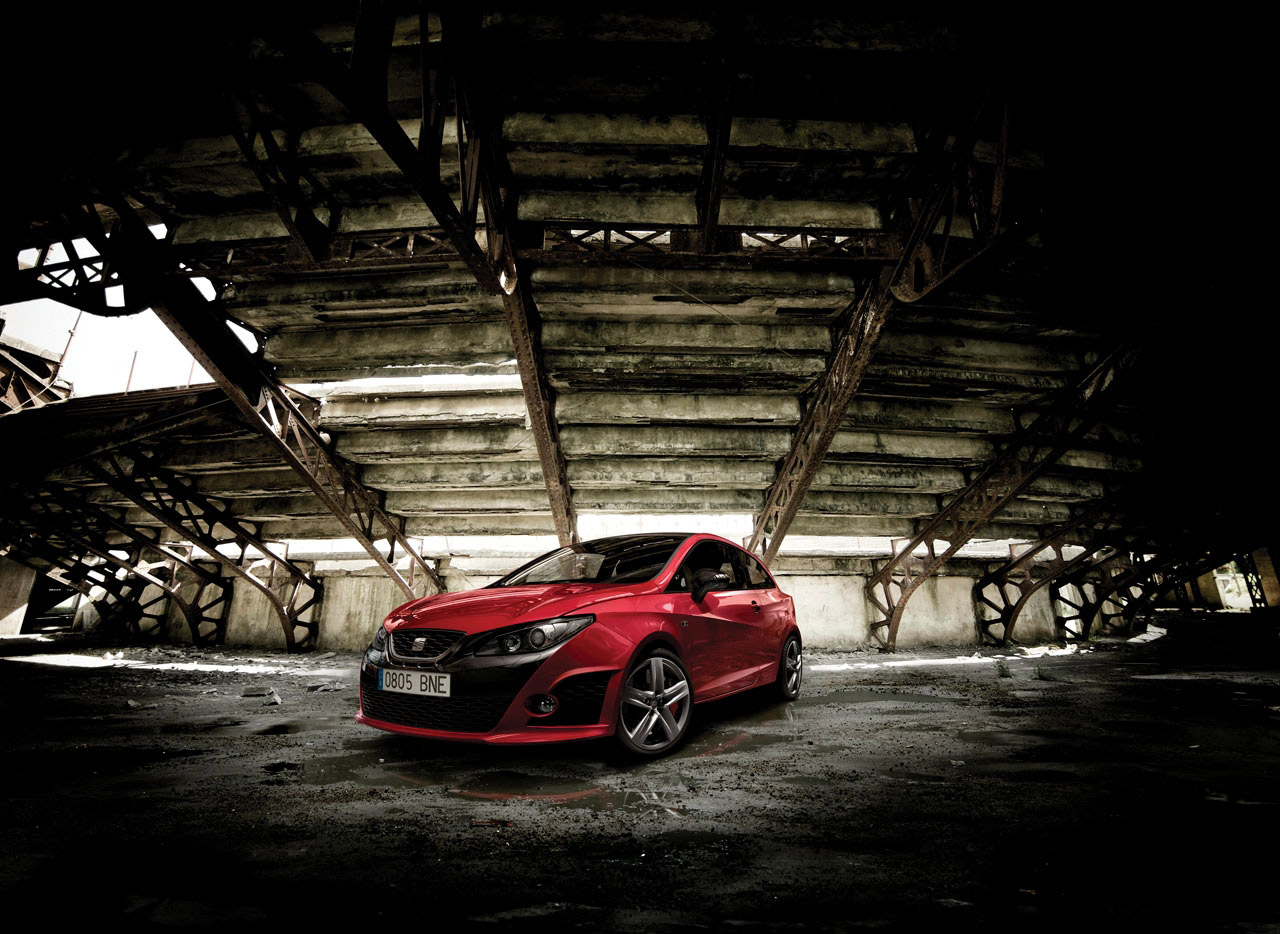 SEAT created an icon with the SEAT 1200 SPORT “Bocanegra”. More than 30 years later, the Spanish brand has reverted to the same exclusive nomenclature to create the new SEAT Ibiza Bocanegra, a vehicle whose innovative design language, especially centred around its characteristic front end, oozes character and sportiness. It instantly becomes, without a doubt, a true collector’s edition.

But its exclusive exterior design is not its only strength – the interior has also been modified compared to the rest of the models in the range to create an even more sporty passenger compartment filled with distinctive detailing. The new SEAT Ibiza Bocanegra will be equipped with either the 150 or 180 hp twin charged 1.4 TSI engine found on the FR and the CUPRA versions.

The new Ibiza Bocanegra has very clearly been created to provide a thrilling driving experience. Its new exterior design, whose masterful lines appeared on the SportCoupé “Bocanegra” prototype presented at the 2008 Geneva Motor Show, puts SEAT’s new vehicle firmly in the spotlight. This is indeed a unique version aimed at customers who want an exclusive Ibiza.

The main characteristic of the new Ibiza Bocanegra is found on the front of the car. As its name suggests, the black volume at the front is reminiscent of a mask, which strengthens the stylishness of SEAT’s new model.

The top half of the front on the Ibiza Bocanegra is emphasised by completely black double headlights and the central grille with its honeycomb mesh and black surround, including innovative air vents at the base. The bumper combines black with the body colour, while a broad grille beneath that takes care of cooling the engine. The fog lights are built into the bumper, which is bigger at the bottom and over the wheel arches, and its muscular volume contributes toward the car’s unmistakably sporty appearance.

Other elements that combine perfectly to further add to the Ibiza Bocanegra’s image are the door mirrors with their black housing, the sunroof and the attractive 17 inch “Sira” rims which, on the CUPRA version, feature a brake assembly with AP-Racing callipers, and low profile 215/40 R17 tyres.

The rear of the vehicle also features honeycomb mesh on the side grids, an impressive spoiler, chunky wheel arches and a tinted window. But what really identifies the personality of the car is the “Bocanegra” badge centred on the hatch door, a characteristic trait of SEAT’s most exclusive versions.

The sporty body colours available on the new Ibiza Bocanegra are Dakota Red and Candy White, and both clearly highlight all the stunning design differences found on the model.

Building on the sporty interior of the FR and CUPRA versions, several significant modifications have been made to the passenger compartment of the SEAT Ibiza Bocanegra, much to the delight of discerning customers.

As is usual on SEAT’s sportiest models, the first things that get your attention on the Ibiza Bocanegra are the seats, which are upholstered with specific fabric made up of rhomboids stitched together in red to generate a definitively sporty look.

The upper part of the seats sport the logo that identifies this version – a capital “B” stitched in red – and the sporty Ibiza range models feature comfortable, ergonomic seats that provide the driver with the highest level of safety.

Another eye-catching element in the interior is the three-spoke steering wheel, which is flattened at the base, sports a capital “B” for Bocanegra in aluminium in the middle of the vertical spoke and the seven-speed DSG shift paddles at the ends of the horizontal spokes for easier gear changes without releasing the steering wheel; whereas the DSG gear gaiter has red stitching to match the seats.

Different shades of black prevail in the interior, especially Brillante Black on areas of the dashboard soft-pad, the door panels and the central tunnel; or Carbono Black on the steps, the lower A pillars, the wheel arches and the specific floor mats, which also have red borders.

The Bocanegra logo on the instrument panel distinguishes it from the FR and CUPRA versions. Furthermore, the binnacle hood and radio casing feature Carbono Black, and the brake and accelerator pedals boast aluminium trim.

The new Ibiza Bocanegra is equipped with the twin charged 1.4 TSI engine, either in its 150 or 180 hp version. This new generation engine is powerful and reliable, and guarantees brilliant performance levels and reduced consumption figures.

Other standard equipment on the Ibiza Bocanegra is the XDS system, which combines with ESP and TCS and functions as a self-blocking differential without the need for any additional mechanical elements. The system anticipates traction loss to the wheels and limits tractive force to the wheel expected to lose grip, preventing the inside wheel from skidding, especially around curves, and the car from understeering.

The new SEAT Ibiza Bocanegra features unique styling and personality, combining a distinctively innovative design with large doses of exhilarating vitality, values that SEAT applies to all its models, but with even more new meaning on the Ibiza Bocanegra.

A look at the past

The design of the new Ibiza Bocanegra that SEAT is presenting at the Barcelona Motor Show is reminiscent of the first SEAT SportCoupé launched, the 1200 SPORT/SPORT 1430 “Bocanegra”. Even though more than 30 years separate the launch of the two models, both feature innovative styling and magnificent performance figures, and both ooze character and sportiness. The following are the main characteristics of the first “Bocanegra”.

• The launch of the SEAT 1200 SPORT in 1975 was a milestone in the Spanish brand’s history since it was the first model to be wholly-developed at the SEAT Technical Centre in Martorell.
• The model was called “Bocanegra” for its characteristic front end with integrated plastic bumpers. It featured a two-door body, four-speed gearbox and 67 hp 1.2 engine that gave the 1200 SPORT “Bocanegra” a top speed of 157 km/h.
• The design language of the SEAT 1200 SPORT was groundbreaking from any angle, characterised by sharp straight lines at a time when rounded contours were fashionable. Its interior design was also ahead of its time, and included a control panel made from a single piece.
• The main qualities of the SEAT 1200 SPORT “Bocanegra” were its innovative design, excellent performance and recognised stability.
• The range was later extended with the addition of the SEAT SPORT 1430, whose 77 hp delivered a top speed of 164 km/h. Equipped with the engine found on the SEAT 1430, this model was barely different on the outside or the inside compared to the 1200 SPORT version.
• Production of the SEAT 1200 SPORT began in 1976 and stopped in 1979 (with a total of 11,619 units sold), while the SEAT SPORT 1430 went on the market a year later in 1977 (7,713 units sold). In total, sales of both models reached 19,332 units, which were made exclusively in the Spanish market.