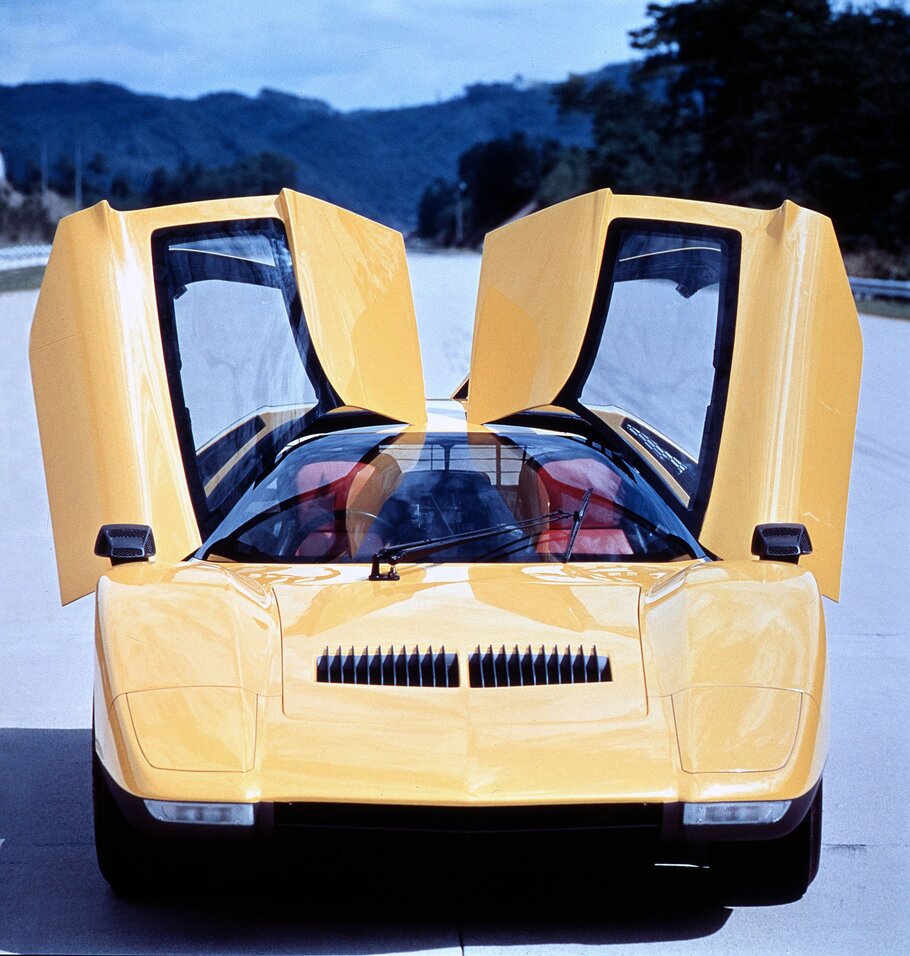 In October 1970 Mazda unveiled the radically angular and streamlined RX500 concept car at the 17th Tokyo Motor Show. The start of the new decade also marked the company’s 50th Anniversary and the RX500 was a bold statement of Mazda’s engineering and design ambition. It quickly became a crowd favourite, captivating the public with its futuristic design and technology.

It looked like a car from a different planet to the Cosmo, Luce and R100 rotary production cars on sale at the time – the wedge shaped supercar had forward opening butterfly swing doors, while its 250ps 10A rotary engine was accessed by gullwing opening engine covers. It was also a road safety test bed that had multicoloured rear strip lights that indicated whether the car was speeding up, cruising or slowing down by changing colour.

Given its head-turning design it was hardly surprising that the space-age RX500 generated strong media interest worldwide. This exposure no doubt created the inspiration for turning this spectacular vehicle into a model car. Famous British toy car makers Matchbox recognised the potential of the RX500 and included it in its ‘Superfast programme’ – a response to the 1968 introduction of Hot Wheels by Mattel, which featured thin axles and new wheels that made them faster and more fun to play with.

Why did Matchbox decide to include this one-off Japanese supercar concept in its portfolio? Matchbox’s largest sales market at the time was the United States and Matchbox was looking for futuristic fantasy and concept cars that would appeal to children in America. The RX500 perfectly matched these requirements, and with a lot of interest in Mazda and the rotary engine in Europe as well, it was no wonder that the orange Matchbox RX500, introduced in 1971 as the MB66, immediately became a global bestseller.

But back in the full size world how did Mazda come up with such a radical vehicle in the first place? The development of a prototype designed to research the behaviour of plastic vehicle bodies and driving dynamics at speeds of over 125mph had been initiated as early as 1968 under the codename X810. The idea was to investigate the harmony between people and speed in a future society, based on possible future intercity traffic scenarios. An experimental vehicle was required – one with a mid-engine, low air resistance and high downforce and, at the same time, the smoothness of a rotary engine. The RX500 was also considered as a potential successor to the Cosmo Sport 110 S, Mazda’s flagship car at the time.

A carefully selected team produced various models and studied their aerodynamic drag in the wind tunnel. Contrary to the original plan of building a coupe, designer Shigenori Fukuda’s streamlined Shooting Brake model, which offered the lowest aerodynamic drag, was chosen. Fukuda-san drew inspiration for the RX500’s design from the film ‘2001: A Space Odyssey’, among other things. The vehicle was to resemble a classic car as little as possible, so a wide variety of design elements from racing and aviation found their way into the RX500. The rear stands out in particular, with its unusual appearance, evoking a mix between a spaceship and a jet fighter. Inspiration also came from Fukuda’s association with Italian car body manufacturer Carrozzeria Bertone. Thus, Fukuda-san added soft curves and contours to the RX500 to avoid creating monotonous lines.

Another distinctive design feature is the wrap-around windscreen. With the A-pillar fully concealed, the vehicle’s glass surfaces appear to be cast in one piece, giving the cabin a dome-like appearance. Entry to the RX500 is gained through a pair of butterfly doors. Even when stationary, the door concept, familiar from motorsport, creates a dynamic impression. Behind these front doors, a pair of gullwing doors, which serve as a longitudinally split cover for the engine compartment, house the spinning heart of the supercar. A detail that escaped Matchbox when designing the speedster for children – here, the engine compartment is concealed under a large rear-opening hatch.

Inside the car, passengers sit in two bucket seats. The eye is drawn to the three semi-circular instruments behind the four-spoke leather steering wheel, which are arranged in a wrap-around dashboard. Entertainment is also provided for in the RX500: The centre console houses an AM/FM radio behind the four-speed transmission taken from the Mazda Luce R130 coupé. The RX500 was equipped with a futuristic tail light concept intended to provide additional information to other road users, thereby making traffic safer. For example, the lighting system at the rear of the vehicle included red, yellow and green lights in addition to the standard red brake and white reversing lights. Depending on the braking intensity, the red lights would light up progressively to warn following traffic in the event of emergency braking, similar to today’s emergency braking signal with flashing tail lights. The yellow lights come on as soon as speed is reduced, while the green lights indicate that the vehicle is accelerating.

It was also the RX500’s rotary engine that cemented its supercar concept status. Powered by an upgraded two-rotor 10A engine located centrally for perfect weight distribution, the tiny 982cc rotary produced 250ps and revved to 15,000rpm – higher than the grand prix cars of the period. With a fibreglass-reinforced plastic body on a tube frame, the RX500 weighs just 850kg resulting in a power-to-weight ratio of 3.4kg per horsepower. It was also just 1.065 metres tall as well – light, fast, low and futuristic it’s no wonder it was a dream car in the real and the toy car world.

A dip into the Mazda archive reveals pictures of the car in different colours, which caused speculation that several versions of the RX500 been built. In fact just one RX500 was built, originally green it was repainted yellow for the Tokyo Show, as all Mazda vehicles on display that year were presented in the same bright yellow with red interiors.

After the Tokyo show, the RX500 continued to make a splash at various shows around the world and was painted silver and a restoration in 2008 revealed traces of the previous green and yellow colours underneath. Today the sole Mazda RX500 can be seen at the Numaji Transportation Museum in Hiroshima.

While the oil price crisis of 1973 dashed any hopes of production RX500s, unsurprisingly the crisis did not affect the miniature edition of the RX500. After its launch, the Matchbox model remained on sale for over four years until it was reissued as a red Streaker model in 1975. Production was discontinued in 1976. Then, between 1978 and 1985, the RX500 was again available in other colour versions in a number of local markets. Thus, the small, successful homage to the RX500 remained on toy shelves for a total of over a decade and has been sold countless times around the world.

Those hoping to display their own small tribute to the rotary sports car in their living rooms should take a look inside their old toy box – perhaps a small 1:59 scale Matchbox RX500 awaits them there. It’s well worth checking out – these days, the small model is a popular collector’s item, while for more serious collectors, Spark models now offer a detailed RX500 diecast model. A one off radical concept car, the bold Mazda designers behind the RX500 could never have imaged how this one-of-a-kind Mazda would become a toy car sales success around the world.