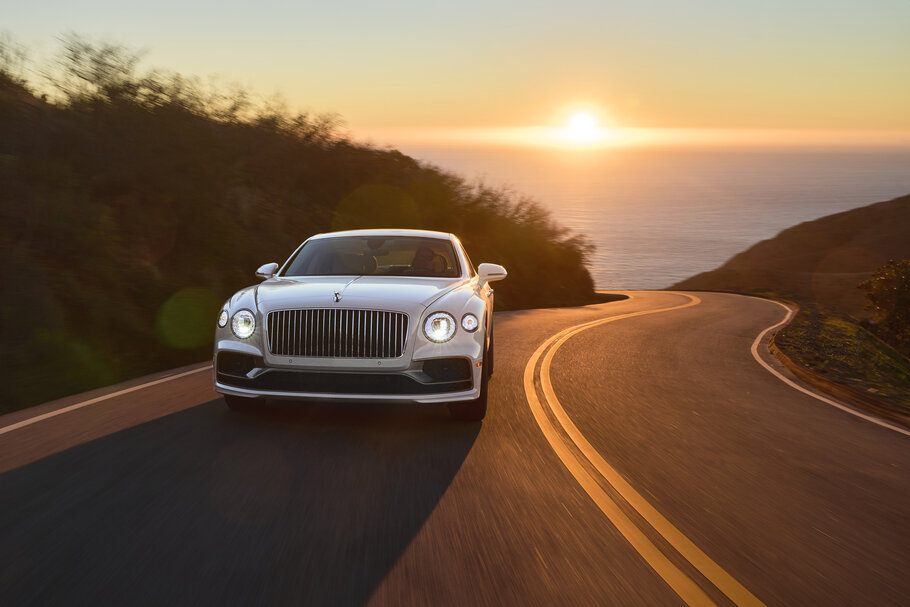 Over six days in January, a combined fleet of nine Flying Spur Hybrids covered 10,500 miles over six days, of which 3,000 miles were on electric power – equivalent to driving across the United States from coast to coast. Compared to a Flying Spur V8, each car saved three gallons of fuel each day.

Almost 100 media guests and experts from around the global had the opportunity to experience the new Flying Spur Hybrid in sunny California – and drove an impressive number of miles on battery power alone. From chic Beverly Hills, through the beautiful scenery of the Ojai mountains to the coastal splendour of Santa Barbara, the fleet of Flying Spur Hybrids amassed data – downloaded every day from the car’s built-in statistics – showing that 30 per cent of their usage was with the engine off.

Over a varied 194 mile route of 50 per cent highway, 44 per cent country roads and 6 per cent urban driving, the Flying Spur Hybrid’s Intelligent Navigation System calculated the best possible use of battery energy for maximum efficiency, deliberately retaining charge for when it would be needed most – in urban environments, on slower roads and in traffic. 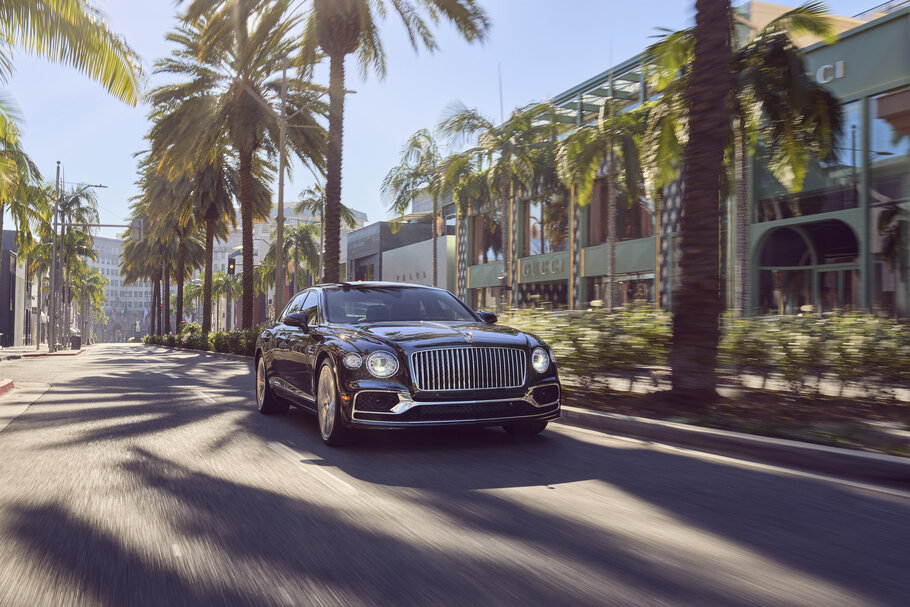 In a recent Bentley research study, 70 per cent of customers identified the top purchase reason of a hybrid was due to environmental friendliness, with 98 per cent driving daily in EV mode and 83 per cent also charging their vehicle daily.

However, customers still want the ability of grand touring, using electric drive during the week with the security of an internal combustion powertrain for the weekend, making a hybrid a perfect solution. The uptake of Bentley’s new Hybrid models is already reflected in last year’s sales figures, with one in every five Bentaygas sold being a hybrid.

In November 2021, an engineering prototype Flying Spur Hybrid travelled more than 450 miles across Iceland on a single tank of second generation biofuel and a battery recharged with geothermally-sourced electricity, proving genuine real world grand touring ability whilst achieving an 80 per cent CO2 reduction on wheel-to-well basis vs. ordinary gasoline. This combination of extensive range with the added benefit of electrified driving in the city, and the ability to add another 400+ miles of range in a matter of minutes by refuelling, is the key factor behind Bentley’s commitment to hybrids as part of its Beyond100 journey to full electrification.

The Flying Spur Hybrid demonstrates that hybridisation does not compromise luxury or performance. With an unperceivable blend between the internal combustion engine and electric motor, refined serenity is on offer regardless of driving mode or style.

The new powertrain combines a 2.9-litre V6 petrol engine with an advanced electric motor, delivering a total of 536 bhp (544 PS) and 750 Nm (553 lb.ft) of torque – an additional 95 bhp in comparison to the Bentayga Hybrid. 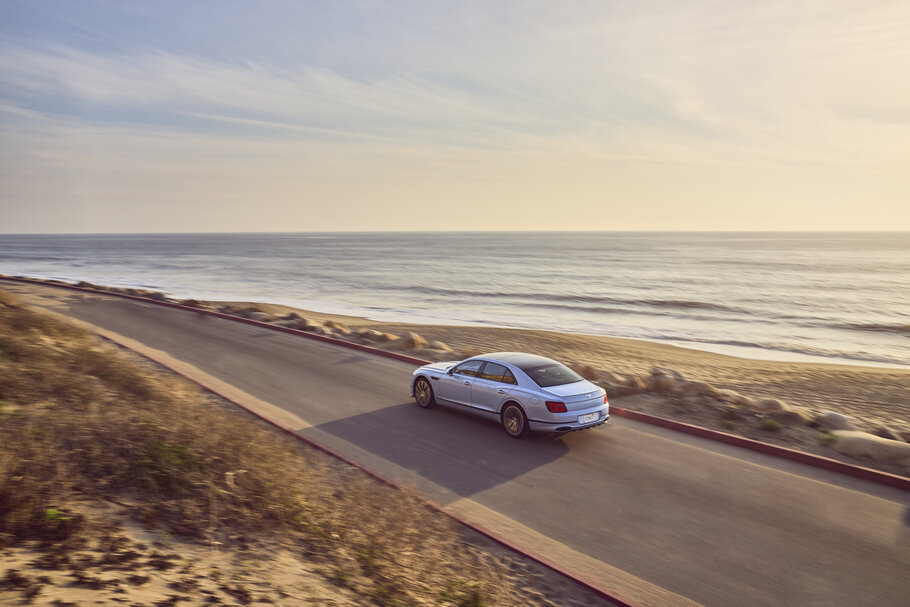 The advanced electronic motor is located between the transmission and the engine and provides up to 134 bhp (136 PS) and 400 Nm (295 lb.ft) of torque. The permanent magnet synchronous motor delivers full torque instantly for silent acceleration from standing start.

The E-motor is powered by a 18.9 kWh lithium ion battery and can be charged to 100 per cent in as little as two and a half hours (region specific). The power electronics convert the energy stored from the high voltage battery to supply the E-Motor or supplement the existing 12v vehicle electrical infrastructure.

The Flying Spur was designed as a car both to drive and be driven in. Contemporary and uplifting, the luxurious cabin skilfully combines key elements of Bentley DNA, cutting-edge technology and the finest automotive craftsmanship in the world. It features astounding detail, sculpted surfaces and contemporary lines that will constantly surprise and delight occupants. 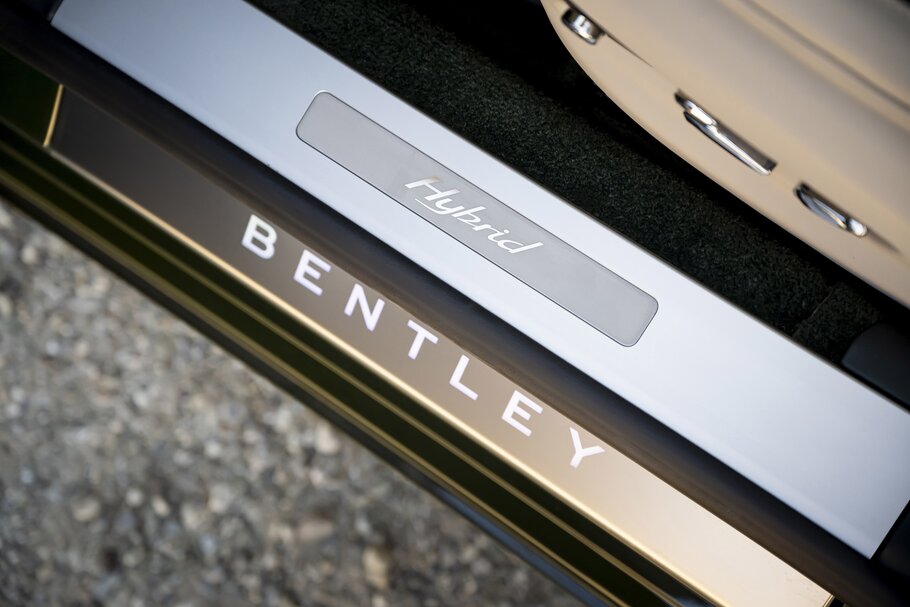 The refinement and craftsmanship is not only skin deep. In EV mode, the Flying Spur Hybrid offers occupants up to 50 per cent lower cabin noise overall compared to a combustion engine, thus providing the level of isolation, luxury and serenity to watch the world go by.