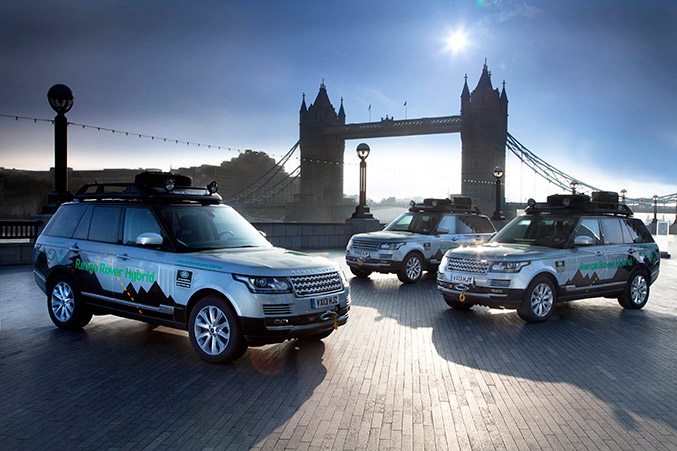 The test, proving the new Range Rover Hybrid as the world’s most capable hybrid, set off from the home of Land Rover in Solihull, UK on August 22 and will travel overland for more than seven weeks through Europe, Russia and Asia to Mumbai, India – arriving on October 15.

The Silk Trail is a historical network of interlinking trade routes which connected East, South and Western Asia with the Mediterranean and European world. Extending 4,000 miles (6,437km), the Silk Trail gets its name from the lucrative Chinese silk trade which was carried out along its length and became a significant factor in the development of the civilisations in Asia & Europe from 206BC until the late 14th Century.

Silk Trail 2013 Expedition Leader, Dougie Dale said: “We are delighted with progress so far, but the European leg is the easy part with good road networks – this has allowed us to use the Hybrid system to great effect predominantly in urban areas. As the expedition heads towards Eastern Europe and beyond over the next week, we expect the terrain to toughen and we will really start to use the Range Rover Hybrid’s uncompromised capability.”

The Silk Trail expedition is divided into 10 stages and is scheduled to visit France, Belgium, Germany, Poland, Ukraine, Russia, Uzbekistan, Kyrgyzstan, China, Nepal and India.  The Range Rover Hybrids are being driven by teams of Land Rover development engineers and specially invited media from 10 countries in Europe and other nations along the route.

“The 53 day expedition will cross 12 countries and tackle some of the world’s most challenging roads, passes and trails, including part of the ancient, 4,000 mile Silk Road which connected Asia with the Mediterranean.  This event is the latest in Land Rover’s proud history of going ‘above and beyond'” said John Edwards, Land Rover Global Brand Director.

On Monday 26th August the crews and vehicles paused in Berlin, Germany, after completing 833 miles (1,340km) of the route.  Over time, Berlin has become a symbolic meeting point between western and eastern Europe, reflecting the Silk Trail’s linking of the western world with the far east in earlier centuries.  The 1,094 mile (1,760km) Stage 2 drive to Cracow (Poland) and Odessa (Ukraine) starts Wednesday 28th August.

“A stunning combination of mountain passes, arid desert, high altitude, chaotic city streets, heat, humidity and wilderness will provide the perfect testing ground for our first hybrid.  Our engineers are using this adventure as the final development drive before the official sign-off for series production later this year,” added Edwards.

“Land Rover has been exploring the planet since the debut of its first model in 1948.  With the new Range Rover Hybrid, the world’s first premium diesel SUV hybrid, combining significantly lower CO2 emissions with uncompromised performance, the Silk Trail 2013 expedition expresses Land Rover’s commitment to its vehicles as well as to the environment,” concluded Edwards.