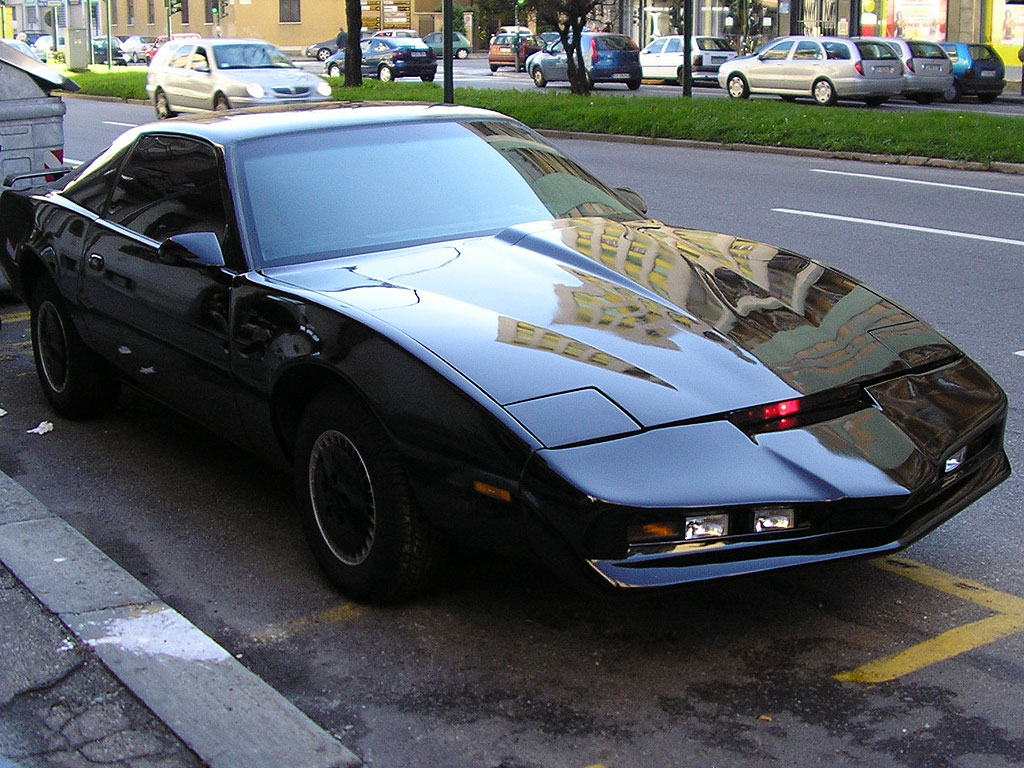 Sometimes Hollywood movies make a car as famous as the actors that appear in it.  Perhaps the best example is the movie Back to the Future?  Is there anyone who doesn’t know what a Delorean is?  Not if they watch movies and television, there isn’t. If Back to the Future was never made, a Deloreans would just be an interesting classic car.  Let’s take a look at several other cars made famous by Hollywood movies.

KITT (Knight Industries Two Thousand) was a souped-up 1982 Pontiac Trans Am that was driven by David Hasselhoff in the series Knight Rider.  It was a sports car that offered artificial intelligence to assist David Hasselhoff in his capers.  In the series, KITT could hold a conversation, shoot weapons and perform other tricks. Although Pontiac never released a Trans Am in “KITT trim,” the series undoubtedly sold a lot of TransAms for them.

Christine was a big, red 1958 Plymouth Fury and the star of the 1983 Stephen King horror movie of the same name. Here’s the plot: Arnie Cunningham (Keith Gordon) is a awkward teenager who purchases a wrecked 1958 Fury. After he finish fixing it up, he catches the attention of Leigh Cabot (Alexandra Paul.) When the two begin to date, Christine becomes “jealous” and starts to do odd things to disrupt their relationship. According to the Wikipedia entry, 17 Plymouth Furys were required to film the movie.

It’s the early 1960s and the end of the summer in Modesto, a small California town. In American Graffiti, several of young residents are leaving for college and the angst of leaving their familiar home behind  starts to sink in. A sub-plot in the movie is actor Paul Le Mat behind the wheel of his bright yellow 1932 Ford Hot Rod Coupe being taunted by Harrison Ford in his souped-up 1955 Chevy.  Director George Lucas grew up in southern California’s car culture and this, no question, permeates the movie.  Today, bright yellow 1932 Ford Hot Rod Coupes can be found in virtually every car show as a result of American Graffiti.

A rusty 1973 green Gran Torino appeared in the Coen Brothers classic movie “The Big Lebowski.” Owned by “The Dude” (Jeff Bridges), the Torino shows up throughout the movie. It’s a wreck of a car that is crashed, stolen, stolen, and used to deliver ransom money. When researching this article, we spoke with Lynch Chevrolet of Mukwonago, WI, a popular Chevrolet dealer, and they said the Torino wasn’t the first choice for the movie. Another car was originally planned but a 1973 Gran Torino Sport was chosen so that actor John Goodman could fit in it!

In “Talladega Nights: The Ballad of Ricky Bobby,” Ricky Bobby (Will Ferrell) drives a black and gold 1969 Chevelle Malibu. After major competition with Jean Girard (Sacha Baron Cohen), and a serious wreck on the track, Ricky has to find a way to make it to the top again.  This is a race movie and the hero of the movie, without  question, is the 1969 Chevelle Malibu.