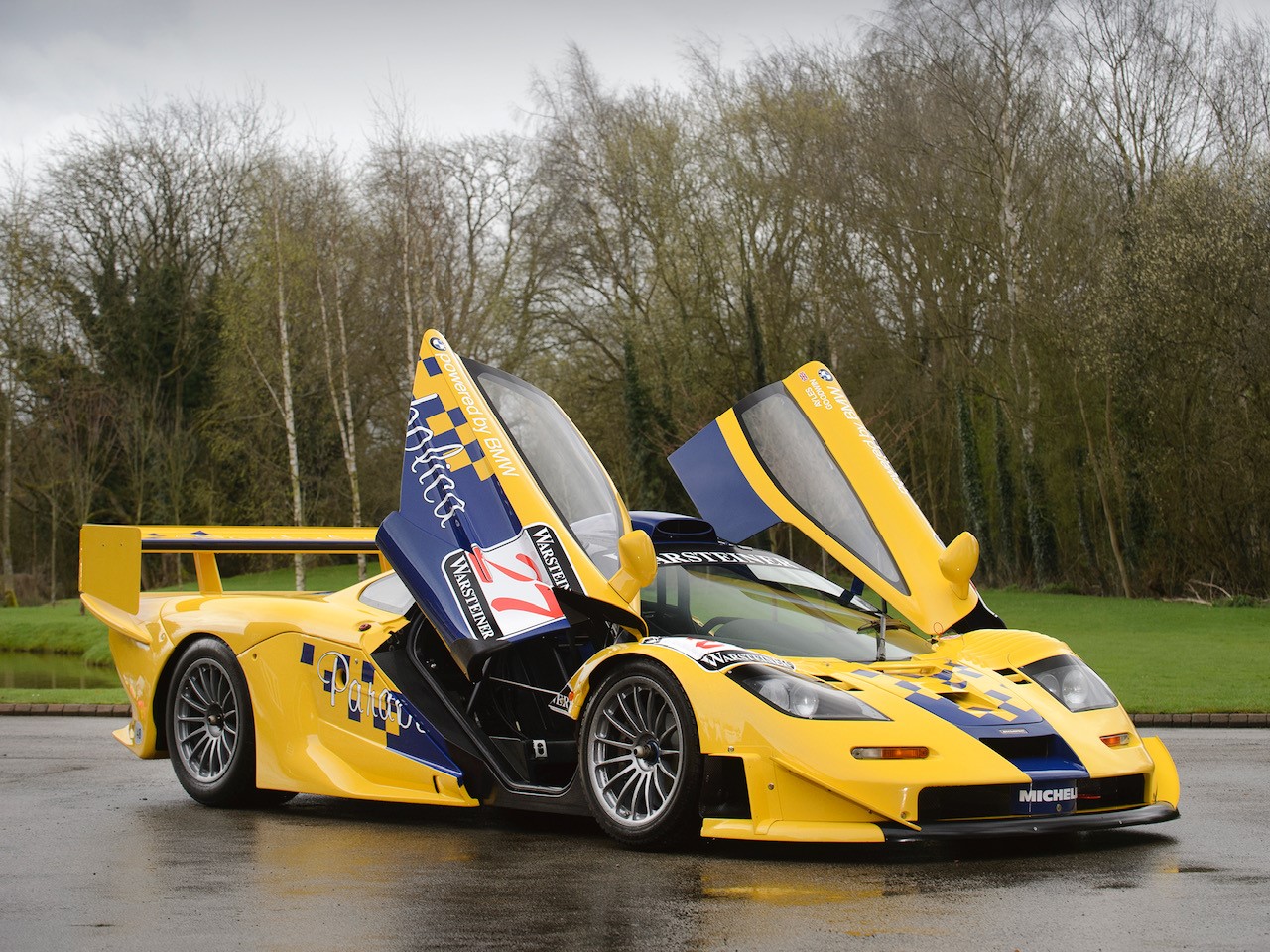 The Concours of Elegance, presented by A. Lange & Söhne, is delighted to announce that its 10th anniversary show will feature a jaw dropping selection of future classics. Assembled by the Concours’ panel of internationally renowned experts, the event will bring together the rarest and most innovative motor cars from recent times, machines that stand out – even in exceptional company. The stars of the future will line up in the grounds of Hampton Court Palace from the 2nd to 4th September, sitting alongside over 70 of the world’s most spectacular and significant cars – all sourced from the world’s leading collections.

The wonderful range of future icons will include a very special Bugatti, the limited-run Divo, one of just 40 examples produced worldwide. The first coach-built Bugatti of the 21st century, the Divo was introduced in 2018, first shown at the Concours d’Elegance at Pebble Beach. It used the Chiron as its base, but featured a bespoke carbon body, along with a raft of other detail changes. While the Chiron was optimised for top-end speed – something of a hyper-GT car, the Divo – while still monstrously quick in a straight line – was optimised with handling and agility in mind.

Affixed to the rear of the all-new body was a 6-ft wide wing, part of a totally revised aero package giving far greater downforce. Unsprung weight was also reduced through the fitment of lighter, Divo specific wheels, while the suspension settings were also revised – all in the name of handling precision. Power came from the now familiar, but still remarkable quad-turbo, 8.0-litre W16 engine, making 1479bhp and 1180 lb/ft of torque – enough for 0-62 mph in just 2.4 seconds, and mind-bending thrust whatever the speed. Despite the downforce enhancements, the Divo was still capable of hitting 236 mph flat out. All 40 Divos sold shortly after it went on sale. A remarkable, and remarkably rare, car that stands out as a genuine engineering triumph.

The event will also welcome a Bugatti of the 1990s, high-tech supercar that has come into its own in recent years, finally getting the recognition it deserves: the Bugatti EB110. The Lamborghini Countach’s crafter, Marcello Gandini had a meaningful influence on how the EB110 looked, with the design refined into its finished form by Giampaolo Benedini. The brutalist yet sleek aluminium-carbon body cloaked truly cutting-edge mechanicals. Power from an outlandish quad-turbo, 60 valve 3.5-litre V12 was sent to all four wheels via a manual transmission. The EB110 also featured innovative double wishbone suspension front and rear – it was a real technical tour de force; a certain Michael Schumacher even bought one. The car that will be on display this September is the only right-hand drive example, built for the 1994 British Motor Show. It was fitted with a prototype ‘SuperSport’ engine as well as prototype SS body parts, and was used to develop the higher-performance variant. It left the factory with 603bhp, up on the standard car’s 553bhp, and was capable of 0-60mph in just 3.2 seconds, and 220 mph flat out. This particular model – perhaps the most special of the 139 EB110s built – has been restored, and upgraded further in recent years, with new pistons and turbos fitted by Dauer, liberating 645bhp from this remarkable engine. Enthusiasts won’t want to miss this spectacular, and increasingly sought after ‘90s supercar.

The glamorous automotive extravaganza will also feature the recently launched Ferrari Monza SP1, a single seater special that took the world by storm on its release in 2018. The Monza SP1 marked the start of a new era for Maranello, as the first of the ultra-exclusive ‘Icone’ special series cars, which celebrate the key moments in Ferrari’s history with cutting edge mechanicals. Ferrari looked to its racing Barchettas of the 1940s and ‘50s for inspiration, in particular the 166 MM of 1948, as well as the 750 Monza and 860 Monza. The single-seater SP1 is powered by a lightly re-worked version of the majestic, naturally aspirated 6.5-litre V12 from the 812 Superfast. In the SP1 it produces an extra 10 bhp, giving a total of 799bhp at 8500 rpm. At the time of its launch, the SP1 was the most powerful modern Ferrari, capable of 0-60mph in just 2.9 seconds. Based on the 812 platform, the use of carbon fibre and other weight saving techniques – including the deletion of the windscreen – mean that the special tips the scales at just 1500kg, some 250kg less than the 812. The design was critically lauded, with the Ferrari Styling Centre winning the Compasso d’Oro industrial design award for the SP1. Just 500 of these very special future icons will be created.

Hampton Court Palace will welcome another coach-built hypercar of the 21st century at the start of September – the exceptional Porsche Carrera GTZ. The first example was commissioned in 2013, with revered Italian styling house Zagato tasked with creating a shapely, all-carbon Coupe body for the Carrera GT, which had been in production from 2003 to 2007. Zagato, known for their work with Aston Martin and Alfa Romeos amongst others, styled a carbon body that was more aerodynamic than the original Carrera GT’s, with a gradually raked coupe roofline featuring the signature Zagato double-bubble signature design motif. Zagato understandably saw no need to alter the GT’s mechanical recipe, keeping the howling, razor-sharp 5.7-litre V10, delightful manual gear shift and carbon chassis. While no performance figures were release for the GTZ variant, the standard GT was no slouch, hitting 60 mph in 3.5 seconds, and reaching a top speed of 205 mph. These Zagato models versions supremely rare; it is believed that just 6 of the 1,270 Carrera GTs have now been converted. This September’s event will offer a rare opportunity to examine a Porsche which combines Italian design flair with perhaps the most arresting analogue driving experience of all.

This September’s show will also feature a car that is certain to be a future icon: the McLaren F1. The event will showcase the inimitable F1 in its ultimate, most extreme incarnation: the GTR ‘Long Tail’. Just 10 of these racing cars were built for the 1997 racing season. With its monstrous BMW-developed V12 and Gordon Murray’s genius design, the F1 GTR competed with great success, even when up against purpose-built racing machinery; the road car based F1 GTRs vanquished the prototypes at Le Mans in 1995. In race trim that V12 was slightly reigned in, capped at 600 bhp, but it was quicker than the road car, thanks to significant light-weighting – the GTR Long Tail tipped the scales at 910kg, versus the road car’s 1140kg – and its new-found downforce, aided by the Long Tail’s modified and extended body. The car that will be on display campaigned around the world with success in the late 1990s, winning at Silverstone in the British GT championship in ‘97 with Chris Goodwin, future McLaren test driver, at the wheel. In recent years it has been converted for road use by the McLaren maestros at Lanzante, surely making it one of the most extreme road registered cars anywhere in the world.

The future icons will join the display of over 70 rare and spectacular Concours Cars at this September’s glamourous event. Outside the main display of vehicles, the Concours of Elegance will assemble around 1,000 further cars in a series of special features and displays, as well as a live collector car auction by Gooding & Co.

James Brooks-Ward, Concours of Elegance CEO, said: “we are delighted to have brought together such a stand-out selection of future icons for our fast-approaching event. As it’s our 10th anniversary show, it feels an appropriate time to look to the future. The carefully curated line-up will showcase the rarest and most spectacular motor cars from recent times – machines that are destined to be at the forefront of Concours events for the decades to come. With these and so many other standout cars on display, we really can’t wait to welcome guests to Hampton Court Palace in a week’s time.

Away from the automotive displays, Concours of Elegance will once again be an occasion of pure luxury, with champagne provided by Charles Heidsieck, picnics by Fortnum & Mason, and a collection of art, jewellery and fashion displays. Presenting Partner A. Lange & Söhne will once again showcase some of its most intricate timepieces.