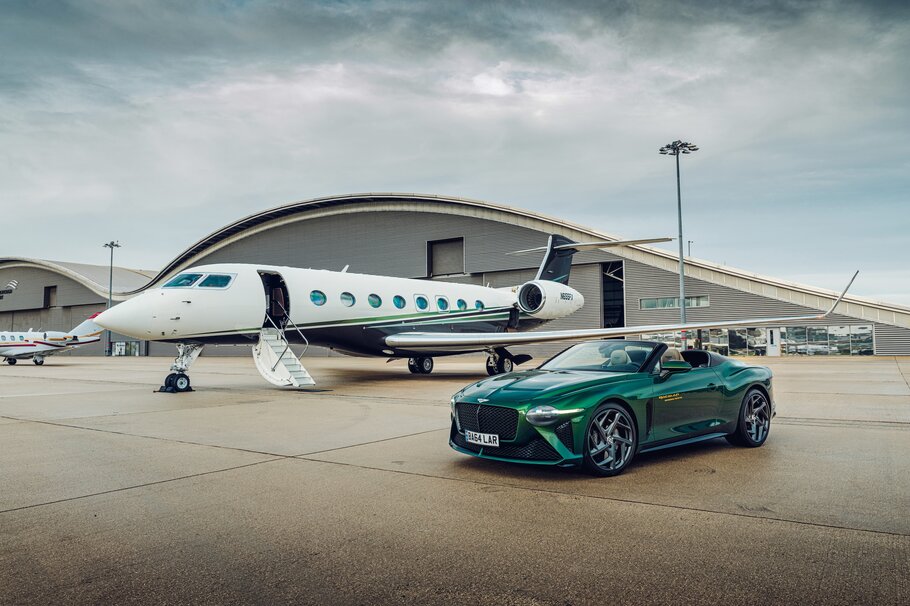 An aviation entrepreneur has taken inspiration from his new Bentley Bacalar and worked with Mulliner Design to create two bespoke, personalised aircraft, which have now joined the fleet of his private aviation company, Flexjet.

Flexjet owner Kenn Ricci has been a Bentley customer for more than a decade. His experience with the brand, which includes multiple co-created cars, led him to consider how bespoke personalisation could be applied to his own industry. Mr Ricci has now worked together with members of Mulliner’s in-house design team on ‘The Bacalar Project’, creating two new aircraft inspired by one of the rarest two-door Bentleys of the modern era, his own Bentley Bacalar.

The Bacalar signifies Mulliner’s return to coachbuilding, with a collection of 12 highly individualised cars being carefully handcrafted by Mulliner’s team of artisans in Crewe. Reflecting the same attention to detail and exceptional design, Flexjet’s new Gulfstream G650 private jet is paired with a Sikorsky S-76 helicopter, both personalised to reflect the unique specification of the Bacalar.

The rare and distinctive paint colour option of Julep, chosen by Mr Ricci for his Bacalar, inspired a unique change to the Flexjet livery in chameleon paint – normally a red-gold chameleon – but for this pair of aircraft a silver-green chameleon paint has been used for the key accents.

Inside, the copperhead shape and basket weave stitching on the Linen and Beluga leather trimmed seats of the coachbuilt Bacalar inspired the custom seats in the Gulfstream G650 and those in the Sikorsky S-76.

The 5,000-year-old reclaimed riverwood that forms the handcrafted veneer of the Bacalar inspired the matching wood veneer species used in both aircraft. Satin Bacalar Bronze fittings adorn the cabins, as well as unique diamond-carved carpet.

Flexjet offers bespoke luxury travel experiences, yet are not the only ones to recognise the individuality that bespoke personalisation can bring. Since 2020, the percentage of customer specifying Bentleys with specific Mulliner features has continued to grow at an almost exponential rate. The demand for Mulliner special paint finishes has more than doubled; and the number of Mulliner personal commissions, bringing a truly individual vision to life by the Mulliner team, has tripled.

While Mr Ricci’s car is given its finishing touches, the first and original Bacalar – the development car known as Car Zero – was on-hand to meet the Gulfstream G650 at Farnborough Airport yesterday, ahead of a flight to New York. Meanwhile, the S-76 made its public debut at The Quail, part of Monterey Car Week, in August this year.

Inspirational Design
The personalisation of the luxury aircraft was inspired by the specification of Mr Ricci’s own Bacalar. Finished in rare Julep exterior paint, the car features customised tri-colour 22” wheels in dark grey satin with polished faces and Arctica highlights, providing a monotone contrast to the vibrant exterior. The centres of the headlamps were colour matched to the Satin Bronze exterior brightware that can be seen on the waistrails and edging the Satin Carbon rear deck. The bonnet vents provide a visual accent, also being finished in satin carbon fibre, as were the wing mirrors. Satin carbon fibre also gave additional definition to the ‘power humps’ behind the front seats, along with the side skirts and rear diffuser. Exhaust finishers with Satin Bronze outers and matte black inners complete the look of the rear of the car.

A white and black cabin with Bacalar bronze accents creates a striking contemporary interior theme. A dual veneer of open pore Riverwood over gloss black encapsulates the occupants, sweeping from one side of the cabin to the other, matching the exterior technical details harmoniously. Every panel and detail of the interior was specified to the customer’s choice, through careful combinations of leather and Alcantara in white, black and bronze, gloss and satin metals in black, dark tint and bright chrome finishes, and the usage of satin carbon fibre.

Bacalar bronze leather accentuates the form of the top roll, the centre line in the steering wheel and headrest surround. This continues with further stitching details to the rear of the seats within the oval perforated Beluga piping and hand cross stitching along the door following the styling line around to the centre console.

Ultimate Personalisation
Uniquely designed details and features in the Bacalar’s cabin emphasise the coachbuilt character of the car, with an almost infinite number of ways for customers to express their personal taste and commission a unique interior. From the use of precious inlays, unique finishes to the driver controls, to the 148,199 individual stitches needed to embroider the unique Bacalar quilt on each seat – the specification of every Bentley is a voyage of discovery, with even a ‘standard’ model being configurable in literally billions of ways.

The process of designing a Mulliner goes even further – with infinite combinations of materials, colours and finishes. The exquisite grand tourers that result are only bounded by the laws of the land and the imagination of the customer.