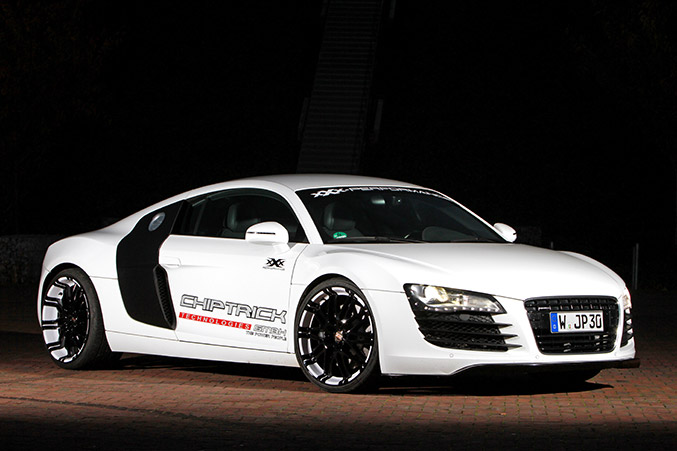 No doubt: With the R8, Audi has placed a veritable sports car on four wheels, which can more than hold its own (optically and from the point of view of driving dynamics) against competition from Stuttgart, Munich or even Maranello. The only reservation is that the free-sucking 4.2 liter V8 engine of the “small” R8 does not run as powerfully as one would wish. These days, 420 horse power and 430 Nm torque are no longer a big deal and drive the R8 in a lesser superior manner than its exceedingly dynamic outward appearance would make believe. Fans of performance have to thus, switchover to the V10 version of the R8 that is clearly more expensive accordingly – or look for ways of obtaining an upgrade for the “beginner’s motorization”.

In this sense, xXx-Performance from Bochum and Chiptrick technologies from Wuppertal jointly placed the Audi R8 project vehicle shown here, on four wheels, which impressively underscores the amount of power that can be potentially teased out of the 4.2 FSI drive mechanism. For this purpose, Chiptrick developed the company’s own Biturbo system which forces the respiration of the V8 with two specially constructed Garret turbo chargers and tailor-made charge-air cooler and also contains amongst others, a high-pressure fuel pump and more efficient injection nozzles. The covers of the charge-air cooler are optionally obtainable in red, black or carbon optics. Moreover, there is the company’s own self-developed exhaust system with cross x-pipe and valve control system on board for the technically adequate disposal of the hot combustion waste gas, which controls all tonalities and volume levels from the decent piano up until the unrestrained fortissimo. Vehicles with the sequential R-tronic 6-gear manual transmission are moreover upgraded with a special transmission software that is adapted to the new situations.

Depending on customer’s requirement, the Biturbo system can also be obtained in three performance stages: In stage 1, the performance of the R8 4.2 FSI surges from 420 to 590 horse power, the torque increases from 430 to a whopping 660 Nm. Already in this configuration, the turbo R8 easily outshines its bigger brother in standard production R8 5.2 FSI quattro (525-550 horse power / 530-540 Nm). The medium class turbo upgrade stage thus has 640 horse power and 675 Nm and the current top version unleashes a whopping 707 horse power and a powerful 809 Nm. In its biggest upgrade version, the Biturbo R8 is catapulted to 100 k.p.h. in just 3.6 seconds – one whole second faster than the standard vehicle. The 200 k.p.h. limit plunges to 10.6 seconds and only 15.8 further seconds later, the speedometer needle crosses the 300 k.p.h. check mark. The electronic system terminates the propulsion only at 313 k.p.h. In spite of the enormous power boost, Chiptrick and xXx-Performance while developing the turbo technology, paid special attention to the sound drivability and suitability for daily road use as well as durability of the entire system. The Biturbo system will be henceforth produced in small batch series and will be obtainable from cooperation partners. Even TÜV gave its blessing to performance stages 1 and 2 while stage 3 is only obtainable as export version.

Yet, the longitudinal dynamics is of course, not all it takes: Visual appearance and transversal dynamics must also fit! xXx-Performance takes care of all these issues. Oxigin 14 Oxrock rims of the dimensions 8.5×20 and 11×20 inches, whose deeply drawn rim wells offer sufficient space for a white wrap refinement, now rotate in the fenders of the Audi R8 that is fitted with magnetic ride chassis. In spite of the four-wheel drive, the tires of the dimensions 235/30R20 and 295/25R20 have all hands full during full acceleration, transmitting the power of the Biturbo R8 to the road surface without losing firm contact with the road surface. 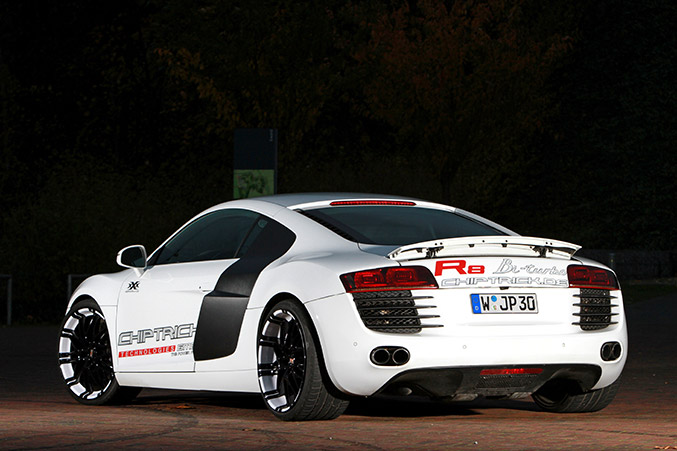 The discharging side-blades of the bigger V10 brother do not only endow the eight-cylinder R8 with an additional optical kick but also adequately addresses the issue of the significantly increased need for cooling air of the charged drive mechanism. While the side-blades on the vehicle pictured here are wrapped in carbon look, they are also optionally obtainable in real carbon. The front spoiler flaps and the fins applied on the rear are also made of carbon fiber.

Moreover: xXx-Performance and Chiptrick offer their three-stage Biturbo conversions also for the “big” R8 with V10 engine and the technically closely related Lamborghini Gallardo. These high-performance sports cars have finally turned into four-wheel monsters with the double forced respiration system: Depending on the performance stage, there are between 850 and 1,200 horse power available to elevate the R8 and Gallardo to the pinnacle of sports cars.