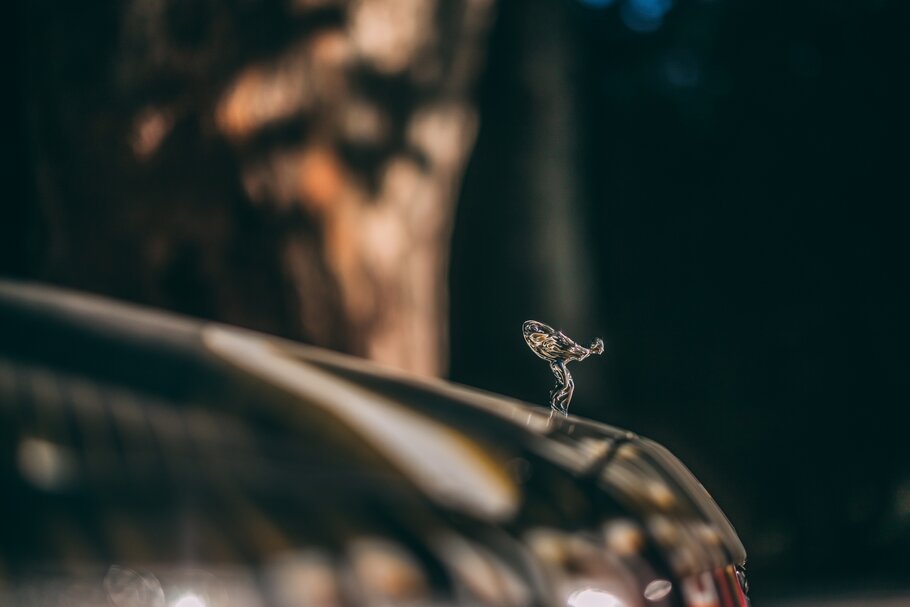 ROLLS-ROYCE SPECTRE: BACKGROUND
Whilst Rolls-Royce has built a reputation for creating the pinnacle of super-luxury motor cars using internal combustion engines, the concept of electrification is long familiar to the brand. Henry Royce began his working life as an electrical engineer and dedicated much of his career to creating internal combustion engines that simulated the characteristics of an electric car – silent running, instant torque and the sensation of one endless gear.

Yet the connection with the marque’s founders is far deeper. When Charles Rolls drove a 1900 electric car named the Columbia, he made a prophecy: “The electric car is perfectly noiseless and clean. There is no smell or vibration. They should become very useful when fixed charging stations can be arranged.” Spectre is the fulfilment of this prophecy.

Spectre also represents a promise kept. In 2011, Rolls-Royce showcased a fully electric Experimental Phantom concept named 102EX. This was followed by 103EX, a dramatic design study that anticipated a bold electric future for the marque. These experimental cars prompted significant interest from Rolls-Royce clients, who felt that the characteristics of an electric powertrain would fit perfectly with the brand. Rolls-Royce Chief Executive Officer, Torsten Müller-Ötvös, responded to this with a clear promise: Rolls-Royce will go electric, starting this decade, and by 2030 Rolls-Royce will be a fully electric motor car brand.

In September 2021, Rolls-Royce confirmed that it had commenced testing of the first all-electric Rolls-Royce, Spectre. To ensure Spectre is first and foremost a Rolls-Royce, it will undergo the most demanding testing programme ever conceived by the marque, spanning 2.5 million kilometres, simulating on average more than 400 years of use for a Rolls-Royce. It is an extraordinary undertaking. 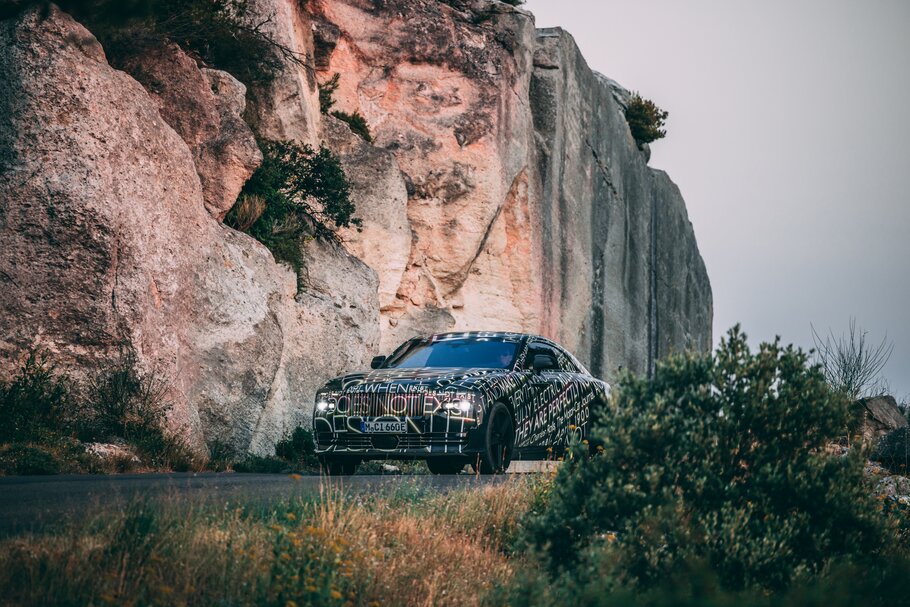 ROLLS-ROYCE SPECTRE: RIVIERA TESTING
Earlier this year, at a bespoke testing facility in Arjeplog, Sweden – just 55 kilometres from the Arctic Circle – Spectre received the first ‘lessons’ in a finishing school that is custom designed to teach the motor car how to behave and react like a Rolls-Royce. Over the past months, the marque’s test and development engineers have shifted their focus from extreme conditions to more formal scrutiny in a location that reflects the motor car’s everyday use: the French Riviera.

In evoking its spiritual successor, the Phantom Coupé, this Electric Super Coupé will be the first all-electric super-luxury motor car with continental touring central to its proposition. The French Riviera and its roads present a perfect combination of the types of conditions that will be demanded from Spectre’s clients, ranging from technical coastal corniches to faster inland carriageways.

Forming a crucial part of Spectre’s 2.5 million kilometre global testing programme, a total of 625,000 kilometres will be driven on and around the French Côte d’Azur. This phase is split into two parts, beginning at the historic Autodrome de Miramas proving ground, located in the French department of Bouches-du-Rhône in Provence. Once a circuit that played host to the 1926 Grand Prix, the site is now a state-of-the-art test and development facility, incorporating more than 60 kilometres of closed routes and 20 test track environments that provide a vast number of testing opportunities over its 1,198 acre footprint.

These include irrigation units that create standing water, demanding handling circuits with tight corners and adverse cambers, as well as a heavily banked 3.1 mile three-lane high-speed bowl, enabling Spectre to be tested at continuous high speeds.

The second phase of testing in the region occurs in the Provençal countryside surrounding the Autodrome de Miramas. This region is enjoyed by many of the marque’s clients, therefore a significant 55% of testing here has taken place on the very roads that many production Spectres will be driven on following first customer deliveries in the fourth quarter of 2023. This provision for testing under local, real-life conditions is repeated in key markets around the world, as the marque goes to painstaking lengths to ensure that its products meet – and so often exceed – the expectations of its highly discerning customer group.

ROLLS-ROYCE SPECTRE: A BESPOKE ELECTRONIC ARCHITECTURE
Spectre is unlike any Rolls-Royce before it. This is not only because of its fully electric powertrain, but also its unprecedented computing power and application of advanced data-processing technologies. Spectre is the most connected Rolls-Royce ever and each of its components are more intelligent than in any previous Rolls-Royce. It features 141,200 sender-receiver relations and has more than 1,000 functions and more than 25,000 sub functions. This is around three times more sender-receiver signals than a typical Rolls-Royce.

The dramatically increased intelligence of Spectre’s electronic and electric powertrain architecture enables a free and direct exchange of detailed information between these functions with minimal centralised processing. To unlock the potential of this technology, Rolls-Royce software engineering specialists developed a decentralised intelligence for Spectre. This is based on data being processed closer to its source rather than being handled in its entirety by a single central processing unit.

By sending more sophisticated data packets – that not only describe a variable but propose a response – the motor car’s reaction time is significantly faster and more detailed. This advanced technology sees much of the development of Spectre pivot from the workshop into the digital space.

Yet developing Spectre is not an exercise in computer science alone. The motor car requires a response to hundreds of thousands of possible scenarios, and therefore it needs the most skilled and experienced specialists to define and finesse an appropriate mechanical reaction. Over the course of the Riviera Testing Programme, the marque’s most experienced engineers are painstakingly creating a dedicated control for each of Spectre’s 25,000-plus functions, incorporating variations of response depending on factors including weather, driver behaviour, vehicle status and road conditions.

In harnessing this new processing power, the marque’s engineers are creating unparalleled levels of detail, refinement and effortlessness for Spectre whilst ensuring continuity in the experience of Rolls-Royce’s internal combustion engine motor cars. These highly experienced specialists describe the result as “Rolls-Royce in high definition”.

ROLLS-ROYCE SPECTRE: ‘MAGIC CARPET RIDE’ IN HIGH DEFINITION
Following months of continual testing, a new suspension technology has been approved that ensures Spectre delivers Rolls-Royce’s hallmark ‘magic carpet ride’. This technology is now being refined and perfected at Miramas and on the roads of the French Riviera.

On straight roads, the system can automatically decouple Spectre’s anti-roll bars, allowing each wheel to act independently. This prevents the rocking motion that occurs when one side of a vehicle hits an undulation in the road. This also dramatically improves high-frequency imperfections in ride caused by smaller, more frequent shortcomings in road surface quality.

Once a corner is confirmed as imminent by satellite navigation data and the Flagbearer system, the components are recoupled, the suspension dampers stiffen and the four-wheel steering system prepares for activation to ensure effortless entry and exit. Under cornering, more than 18 sensors are monitored, and steering, braking, power delivery and suspension parameters are adjusted accordingly so that Spectre remains stable. For the driver, this delivers serenity, predictability and, ultimately, greater control in unprecedented high definition. 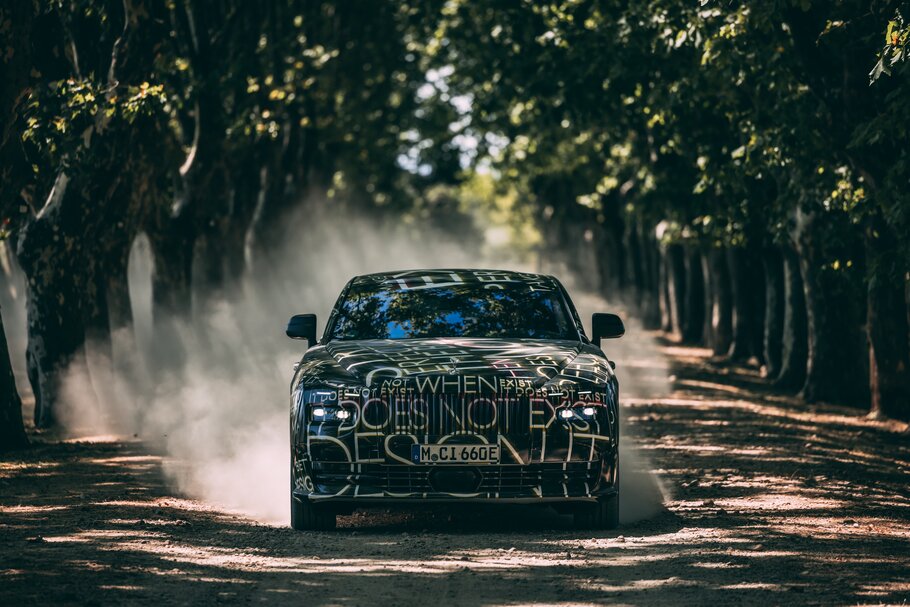 ROLLS-ROYCE SPECTRE: INTELLIGENT ARCHITECTURE PROVIDES UNPARALLELED RIGIDITY
The unparalleled control of such a generously proportioned motor car that is provided by this new technology is enabled by the marque’s all-aluminium spaceframe architecture. Not only has this platform, which is reserved for the brand’s exclusive use, enabled designers to create a new class of Rolls-Royce – the Electric Super Coupé – but it has also provided Spectre with the most rigid body in the marque’s history.

Spectre’s aluminium architecture is reinforced with steel sections that provide exceptional torsional rigidity. This is combined with aluminium body sections that represent the largest of any Rolls-Royce yet. The one-piece side panel, which extends from the front of the A-pillar to behind the rear tail-lights, is the largest ‘deep draw’ part ever produced by Rolls-Royce – extending nearly four metres in length. Likewise, the pillarless coach doors, which are nearly 1.5 metres in length, are the longest in Rolls-Royce history.

Spectre’s exceptional rigidity, which represents a 30% improvement over all existing Rolls-Royce motor cars, has also been achieved by integrating the extremely rigid structure of the battery itself into Spectre’s aluminium spaceframe architecture. Only through the marque’s architecture has this been made possible.

ROLLS-ROYCE SPECTRE: A NEW AERODYNAMIC STANDARD
In announcing the redesigned Spirit of Ecstasy mascot that will sit proudly at the prow of Spectre, Rolls-Royce aerodynamicists predicted that the motor car would have a drag coefficient (cd) of just 0.26, making it the most aerodynamic Rolls-Royce ever created. The dramatic design of this landmark motor car, which itself is only possible using the marque’s spaceframe architecture, has enabled engineers to further improve on this landmark figure.

Following rigorous wind tunnel testing, digital modelling and continuous high-speed testing in Miramas, this figure has been further reduced to just 0.25. This does not just represent a record in the context of Rolls-Royce, but is unprecedented in the luxury sector.

ROLLS-ROYCE SPECTRE: THE EXTRAORDINARY UNDERTAKING CONTINUES
The Spectre global testing programme continues: the Electric Super Coupé will still be tested for a further one million kilometres before the marque’s engineers will consider this undertaking complete. First customer deliveries of Spectre will commence in the fourth quarter of 2023.

Bentley announces record financial results for first half of 2022