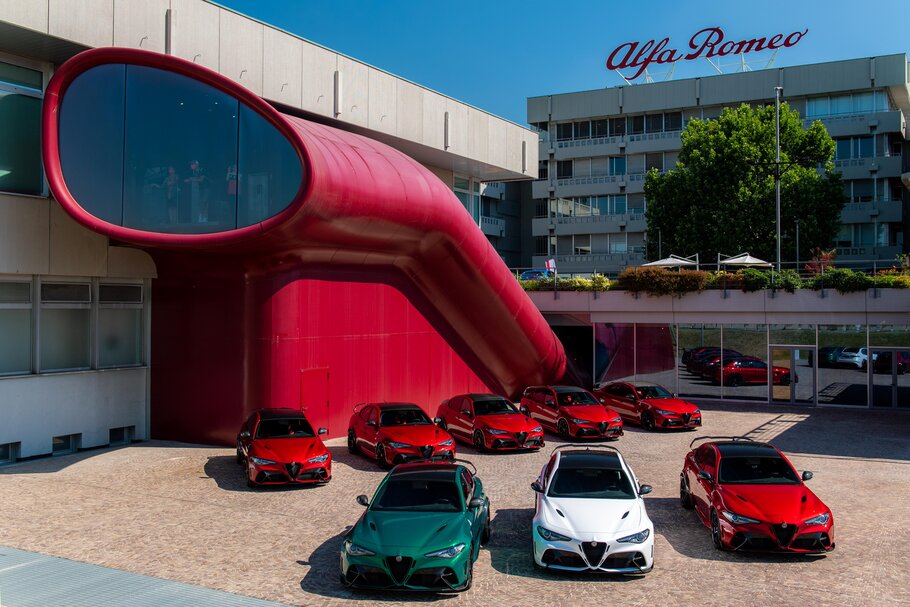 When A.L.F.A. was established on 24 June, 1910, its cars were red. A few years earlier, Italy had been assigned this colour for its racing cars. Since then, red has become an integral part of Alfa Romeo’s DNA. Today, on the brand’s 111th anniversary, Museo Storico Alfa Romeo will be tinged with red to welcome the many enthusiasts visiting Arese to celebrate reaching this milestone.

A parade of private individuals’ Alfa Romeos opened the four-day celebrations, along with a red dress code and a dedicated temporary exhibition at the museum recounting the infinite nuances and interpretations of this colour. This evocative roundup includes early cars which were painted by hand on the track through to the paintwork technologies of recent years, in shades such as the orange hues of Italian red to the darker Proteo red and, of course, Alfa Red, known by its code, AR 501.

On Alfa Romeo’s anniversary, deliveries of the first Giulia GTA and GTAm
This day of celebration, attended by representatives of the Alfa Romeo Clubs as testament to their passion for the Biscione brand, will set the scene for an event that perfectly links the brand’s glorious history to the future. Today, the first Giulia GTA and GTAm models, only 500 numbered units of which will be produced, will be handed over to customers in mainland Europe. These lucky few will have the opportunity to hear from the head of the brand and of design and engineering, who will share the details and the background of this unique project.

Customers will be able to discover the DNA of the GTA in a dedicated museum tour focusing on the quest for lightness, developed over the decades to improve performance on the track and driving pleasure on the road.  Most importantly, they can sit in the driver’s seat of their new Giulia and take part in an exclusive parade on the museum’s track. Fitted with a 540hp 2.9-litre V6 Bi-Turbo engine, with a best-in-class power-to-weight ratio of 187hp per litre, it epitomises the brand’s unique capability to combine style and sportiness.

A special event for the Clubs and parades for all enthusiasts
The Alfa Romeo owners club will take part in a dedicated parade followed by a meeting in the Giulia Hall, with a live stream for those unable to join the celebrations. Throughout the weekend parades will be open to all Alfa Romeo cars of any age, model or colour. Participation is free and included in the museum ticket – like all the other activities – but registration is required, by emailing info@museoalfaromeo.com.

Live from the Austrian Grand Prix: Alfa Romeo is also Formula 1
The museum will also be hosting a live stream of the run-up to the Austrian Formula 1 Grand Prix, with the practice sessions, qualifiers and the race itself to be broadcast live on the big screen in the Giulia Hall. On Friday 25 June, guests can interact with the team’s drivers Kimi Räikkönen and Antonio Giovinazzi, via a live link to the Spielberg circuit, to discover the secrets of the paddock and garage in a virtual tour. Throughout the four days, the Alfa Romeo Racing Orlen single-seater show car will be on display,  proudly bearing the event the logo created to celebrate the brand’s 111th anniversary.

With the support of the Centro Stile, a logo has been created that pays tribute to the brand’s 111-year history, an unstoppable journey made up of prestigious cars, with an unmistakable style, famed all over the world. The logo transforms the iconic elements found in the badge, with the cross, the symbol of Milan, transformed to bear a sequence of the numeral one, which spreads out along a line of perspective to suggest the passage of time from past to present. This logo will be used at the Austrian Formula 1 Grand Prix, to replace the classic Alfa Romeo logo.

Historical itineraries and activities for groups and families
Over the weekend, two in-depth lectures will be given on the brand’s history. On Saturday the talk will focus on the first A.L.F.A. victory (Modena, 1911, Regularity Race), while on Sunday it will look at the 4C prototype designed by the Centro Stile Alfa Romeo in 2011. At the end of the lectures, 4C owners will be invited to parade their cars on the museum track.

The ‘Sea Horses’ exhibition is also live, with illustrations of the use of Biscione engines in sailing, from racing to freight and from naval to fishing vessels. Guided tours behind the scenes of the museum can be booked every day, visiting two floors of storerooms holding cars, engines, trophies, chassis and other artefacts not usually on public view.