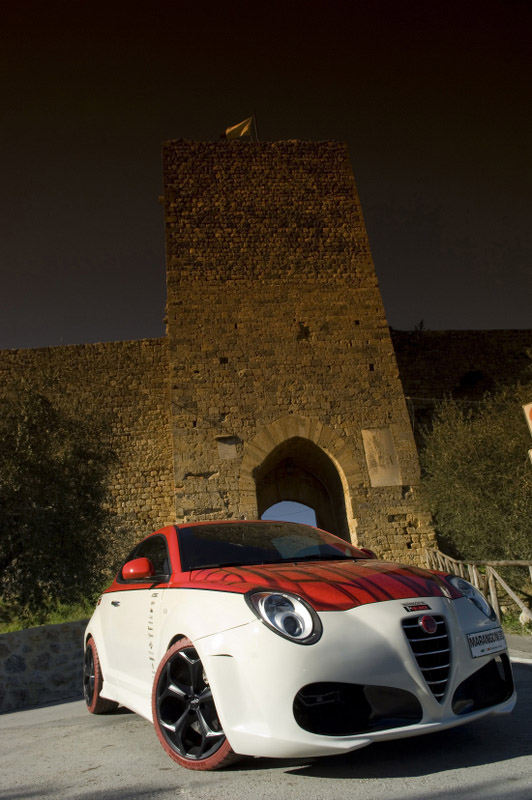 It’s the mightiest MiTo yet! This is the stunning Marangoni M430 – a one-off edition of Alfa Romeo’s hatchback that comes with scissor doors and a 233bhp engine. And Auto Express has driven it.

First revealed at the Essen Motor Show last November, the M430 is the hottest incarnation of the MiTo yet, and although Alfa doesn’t officially endorse it, the car points the way to the GTA version, which is due to hit showrooms later this year.

The newcomer is a very Italian affair. It has been produced by Roman tyre maker Marangoni and Florence-based tuning firm TRC, and takes its inspiration, its front air intakes and its name from the Ferrari F430. At the rear is a carbon
fibre diffuser and quad exhaust tailpipes.

However, when it comes to the M430’s doors, it seems that Lamborghini’s Countach has provided inspiration – the scissor units open in a similar way to those on the legendary supercar!

But the modifications don’t end there. There are 18-inch alloys, special Marangoni Mythos tyres made of red rubber, a tyre pattern print on the bonnet and two-tone red and white paintwork.

Outrageous
From every angle, it looks outrageous – quite a contrast to the elegant MiTo on which it’s based. And it’s even more extravagant inside, with the Italian flag on the sports seats and Swarovski crystals inserted into the leather gearshift collar, handbrake and pedals. But the M430 is about go as well as show. The suspension has been lowered by 40mm and the brakes upgraded with 10-piston calipers and 330mm composite front discs.

The range-topping 1.4-litre T-Jet MiTo delivers 155bhp, but the M430 offers 233bhp, thanks to a new turbo, injectors, a reprogrammed ECU and stainless steel exhaust. That’s enough for 0-62mph in 6.6 seconds and a top speed of 158mph.
Floor the throttle, and not much happens for a few seconds – then all hell breaks loose. There’s a rushing sound as the turbo spins up and an angry rasp from the exhaust as the rev counter races to the 7,000rpm red line.

The savage power delivery leads to lots of torque steer, particularly in second gear, but the wide tyres and lowered suspension produce plenty of grip and minimal body roll, although the pay-off is an extremely stiff ride.

The steering is typically Alfa, being very quick and a little light, and the car changes direction instantly. Factor in composite brakes