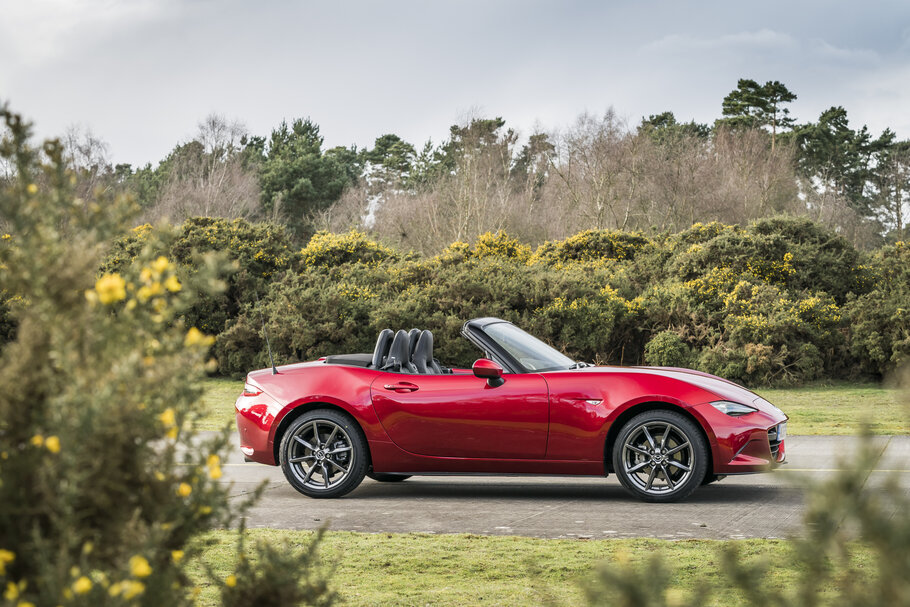 Available to order now for delivery in March, the 2023 Mazda MX-5 continues the winning formula that has seen more than 24,000 fourth-generation MX-5s sold in the UK since its launch in 2015. The 10-model line-up features a new naming structure with Convertible models taking the Roadster name used elsewhere around the globe, while the line-up now features the newly named Prime-Line, Exclusive-Line and Homura trim levels.

With an unchanged engine line-up, both the Roadster and Retractable Fastback RF models come with a choice of 1.5-litre 132ps and 184ps 2.0-litre Skyactiv-G petrol engines. For the 2023 model year the 1.5-litre Roadster is available in Prime-Line and Exclusive-Line grade, replacing the SE-L and Sport models previously offered. The 184ps 2.0-litre Skyactiv-G Roadster is matched to Exclusive-Line and range-topping Homura grades – replacing the Sport Tech and GT Sport Tech model names.

As with the Roadster, the Prime-Line RF is powered by the 1.5-litre engine, while Exclusive-Line models can be specified with either the 1.5 or 2.0-litre engine and the range-topping Homura is exclusively matched to the 184ps 2.0-litre engine. In addition, 2.0-litre RFs in both trim levels come with the option to choose an automatic gearbox.

Updates for the 2023 Mazda MX-5 include the addition of the Zircon Sand paint colour to the MX-5 for the first time, while Homura manual models will feature red Brembo front brake callipers. With continued strong retail demand for the Mazda MX-5, the 2023 model year car is ready to order with full price and specification guides live at Mazda.co.uk.

As you’d expect for a car so famed for its dynamic abilities, the 2023 Mazda MX-5 retains the same award-winning mechanical set up as before. Introduced in September 2018, the updated 184ps version of the 2.0-litre Skyactiv-G engine features lighter pistons and con-rod, plus upgraded camshafts, exhaust valves, fuel injectors, throttle valve and air intake, all of which increase performance over the 160ps version that featured in the fourth-generation MX-5 at launch in 2015. As a result, the engine has a redline of 7,500rpm. In addition with higher fuel pressure and more efficient combustion than the 160ps version, there’s an increase in torque across the rev range, while peak torque rises by 5Nm.

As before 2.0-litre cars with the manual gearbox have a front strut brace, limited slip differential and Bilstein dampers as standard while all MX-5 models feature Kinematic Posture Control (KPC). Mazda’s KPC system is designed to increase stability during cornering without impacting the purity of the MX-5’s handling and driver engagement. The KPC system applies a very small amount of brake force to the inner/unloaded rear wheel during cornering, the resulting brake force pulls the body down, suppressing body roll to provide more reassuring cornering so subtly that the MX-5’s engaging handling remains unpolluted.

Helped by the MX-5’s lightness, performance doesn’t come at the cost of efficiency, with Mazda’s i-ELOOP kinetic recovery and i-stop stop-start technology standard across both engines, the MX-5 is more economical than ever. As you would expect of a car that was named World Car Design of the Year on its debut in 2015, the styling of the 2023 MX-5 has been left alone.

Masashi Nakayama, program manager and chief designer for the MX-5, said “the key phrase for our development of the fourth-generation MX-5 was ‘Innovate in order to preserve’, and I strongly believe that this model’s ongoing appeal is the result of our unceasing commitment to refining the vehicle over its 30-year history. We want it to it to continue to offer customers unique excitement and cement its position as a cultural icon.”

Commenting on the 2023 Mazda MX-5, Mazda UK Managing Director Jeremy Thomson said, “when it comes to driver engagement, the current generation MX-5 has already established itself as a benchmark sports car, and with the 2023 Mazda MX-5 we continue to offer one of the most exciting and satisfying to drive cars money can buy.”

Adding, “Our engineers have created a sports car that incorporates our ground-breaking Skyactiv technology, modern safety and superb efficiency with the driver focused enjoyment for which the MX-5 is loved. The MX-5 is Mazda’s brand icon and it embodies all that is great about our products. Its fun to drive character has strengthened the bond between Mazda and its customers for more than 30 years and the 2023 model continues this unswerving dedication to delivering an affordable, engaging, world-class sports car”.