Why Ford is Saying Sayonara to Japan 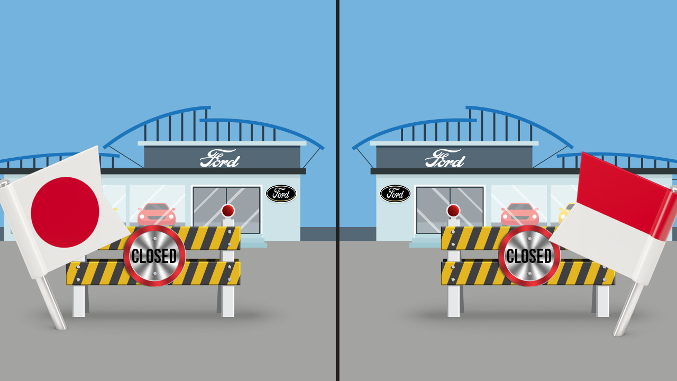 The news that Ford is pulling out of Japan and Indonesia was not a complete surprise, according economics analysts. The US manufacturer has held less than 1% of the market share in both countries, so it’s no wonder they have decided to leave Japan. Some questions remain about the decision to close down Indonesian operations though, as this country has a high and growing economic potential.

While the dismal situation in Japan is pretty clear, the exit strategy from Indonesia seems a bit rushed. Ford sold around 5,000 cars in Japan last year, and this minute figure in such a densely populated economic power is largely due to the strong Japanese domestic market.

The figures are even more depressing considering that Ford only sold about 1.5% of the number of cars imported to Japan, whose population remains loyal to national brands and choose to commute to work in cars by Nissan, Toyota and Honda.

“Japan is the most closed developed auto economy in the world, with all imported brands accounting for less than 6% of Japan’s annual new car market”, explains Ford spokesman Neal McCarthy.

The Japanese policy for protecting the auto market has also made General Motors consider moving away. And Fiat sold just 7,000 cars in 2014, compared to Toyota’s 1.5 million. Despite governmental support however, the auto market in Japan is declining because of a lack of interest in cars in the urban areas and an aging population.

Ford chose to retire from Indonesia, a country with significant economic growth in recent years and one of the most important markets in Asia, due to a series of difficulties in competing with local manufacturers. According to statistics, Ford had 0.6% of the Indonesia auto market, which translates in 6,100 cars sold in 2015.

“In Indonesia, without local manufacturing, there’s just really no way that automakers can compete in that market, and we don’t have local manufacturing,” explained a Ford representative for Reuters. It seems that there’s no marketing campaign, professional car buying tips, or even winning quality that can compete with a strong local market.

Ford started selling cars in Japan in 1974. The offer for the Japanese market included six models: Mustang, Focus, Fiesta, Ecosport, Explorer, and Escape. The company had 52 dealerships and 292 employees and has announced that they have found convenient solutions to provide customer service to all Ford clients.

As for Indonesia, Ford entered the local market in 2002, having built 44 dealerships. It seemed like a smart decision at the time, as Indonesia has a population of almost 250 million, but Ford is simply not strong enough at the moment to deal with the Indonesian internal market. General Motors, Ford’s most important rival, announced their intention of leaving Indonesia last year.

Michael Peggs is the founder of content marketing agency and SEO agency Marccx Media, where they specialize in SEO and Content Marketing. Before Marcxx, Peggs worked at Google in business development, forming digital media and advertising partnerships. He is also a blogger and podcaster, hosting the iTunes Top 10 New & Noteworthy podcast You University – The Personal Branding Podcast.