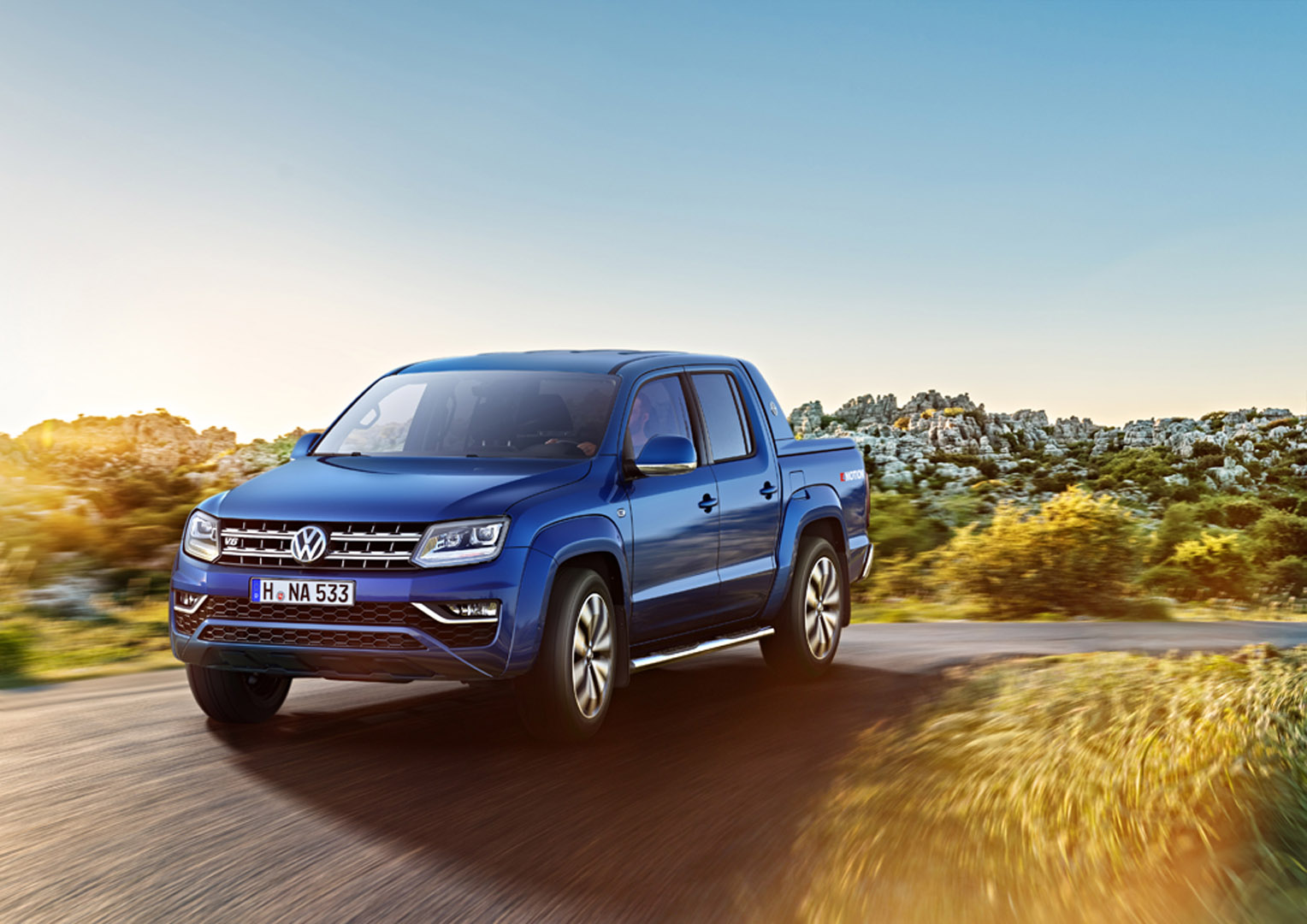 Volkswagen Commercial Vehicles has revealed the first images of its new Amarok on the move, as well as the interior which offers customers a number of new features. These include an attractive cockpit, with a colour multi-function display for the Aventura launch model and state-of-the-art radio/navigation systems. For the driver and front-seat passenger, the Amarok also provides 14-way adjustable ergoComfort seats, which have already won awards for their back-friendliness.

The pick-up is an attractive alternative thanks to its high seat position, good all-round visibility and high-quality interior, making for a comfortable ride both on- and off-road. And, despite its impressive size, getting into the Amarok is easy, with doors that swing open wide and – depending on the design variant – grab handles on the A and B-pillars to help you climb into the cab.

One of the highlights of the new Amarok’s interior are the new electrically adjustable ergoComfort seats for the driver and front-seat passenger, which provide plenty of head and legroom. This is, above all, thanks to the height-adjustable front seats, which can also be moved a long way back. They feature sporty contoured side bolsters that have been optimised to provide maximum comfort and top ergonomic characteristics. The optional electric 14-way driver and front passenger seats can be individually adjusted to suit personal body size. The seat height and longitudinal position can be adjusted at the push of a button, the degree and width of lumbar support can be changed and the backrest and seat cushion angle set. The seat depth can also be adjusted manually. The ergoComfort seats for the driver and front-seat passenger in the Amarok have been awarded the ‘AGR’seal of approval by the Healthy Back Campaign (Aktion Gesunder Rücken e.V.). With nappa leather seat covers, contrasting Ceramique stitching and additional seat heating, the Amarok caters for discerning customers.

The redesigned instrument panel also immediately catches the eye: striking features of the design of the new instrument panel architecture include the emphasis on horizontal lines, the clear division of the surfaces and the precision of the folds and edges. Doing away with round contours and concentrating on horizontal and vertical lines makes the interior appear more striking and pronounced. Numerous storage compartments make life easier for the passengers.

The multifunction steering wheel also makes it easier for the driver to operate the radio, telephone or multifunction display. The Aventura launch model comes with a colour 3D display between the classic round instruments. The driver can use the new, optional paddle switches on the steering wheel (standard in the Aventura) to control the 8-speed automatic transmission, while the frameless rear-view mirror, in combination with the optional Light and Sight package, heightens the upmarket look and sporting character of the new Amarok’s interior.

At the very top of the centre console, and thus directly in the driver’s field of vision, is the infotainment system, allowing well thought-out, ergonomic operation. Equipped with features such as App Connect, Guide & Inform or Car-Net, it is possible, for example, to integrate smartphone apps via a USB interface in order to be able to access them via the infotainment system’s touchscreen. Guide & Inform extends the navigation system by adding online-based, up-to-the-minute information services such as online traffic information. The ‘Discover Media’navigation system also comes with DAB+ digital radio as standard.

Both the ‘Composition Media’and ‘Discover Media’infotainment systems come with digital voice enhancement. This electric voice amplification makes communicating during the journey easier. The hands-free microphone amplifies the voice signals so that the driver no longer, for instance, has to turn to face the back-seat passengers or raise their voice. Passengers on the back seat hear the person’s voice amplified by the rear loudspeakers.

The ‘Park Pilot’ parking assistance system, assisted by the ‘Rear View’ reversing camera, also makes life easier. Stainless steel pedals (exclusive to the Aventura) and black trim, divided from door to door by a bar in contrasting colour, round of the appearance of the Amarok’s interior. Air-conditioning system, Bluetooth connection and up to four 12-volt power supply sockets are also included.

Prices for the new Amarok in Germany start at €25,720 net for the rear-wheel drive Trendline version with double cab, the V6 TDI and 120 kW (EU6, available from the second quarter of 2017), making them just €940 more expensive than the previous entry-level model with a with double cab and 103 kW TDI four-cylinder engine. The top-of-the-range Amarok Aventura with the V6 TDI and 165 kW engine, 4Motion all-wheel drive and 8-speed automatic transmission comes to €46,525 net and will be launched at the end of September 2016.

New Amarok sales in the UK will begin before the end of the year. There are currently no plans to sell the launch Aventura model in the UK. Full pricing and specification details will be released closer to launch. 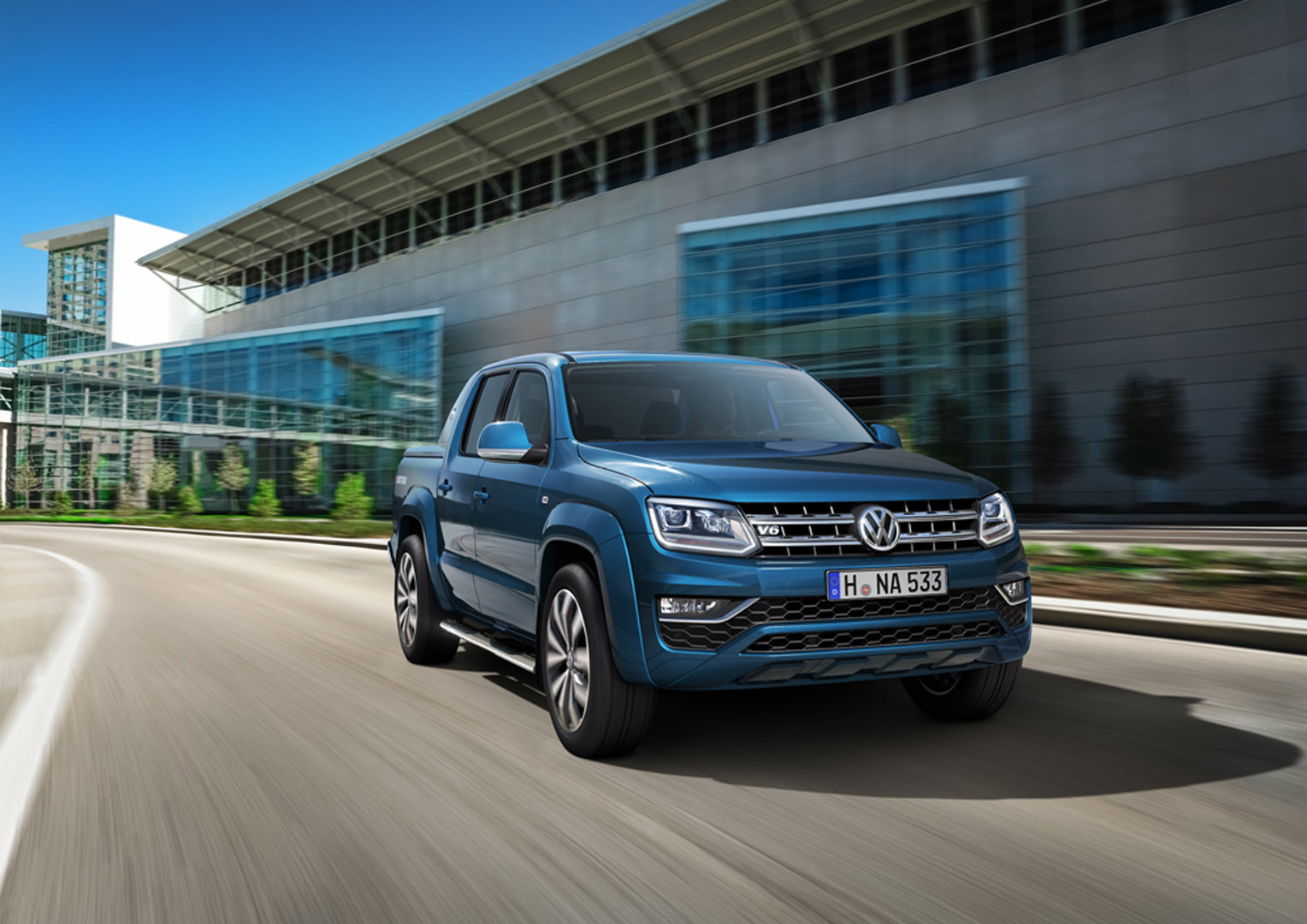 Bentley returns to the green hell