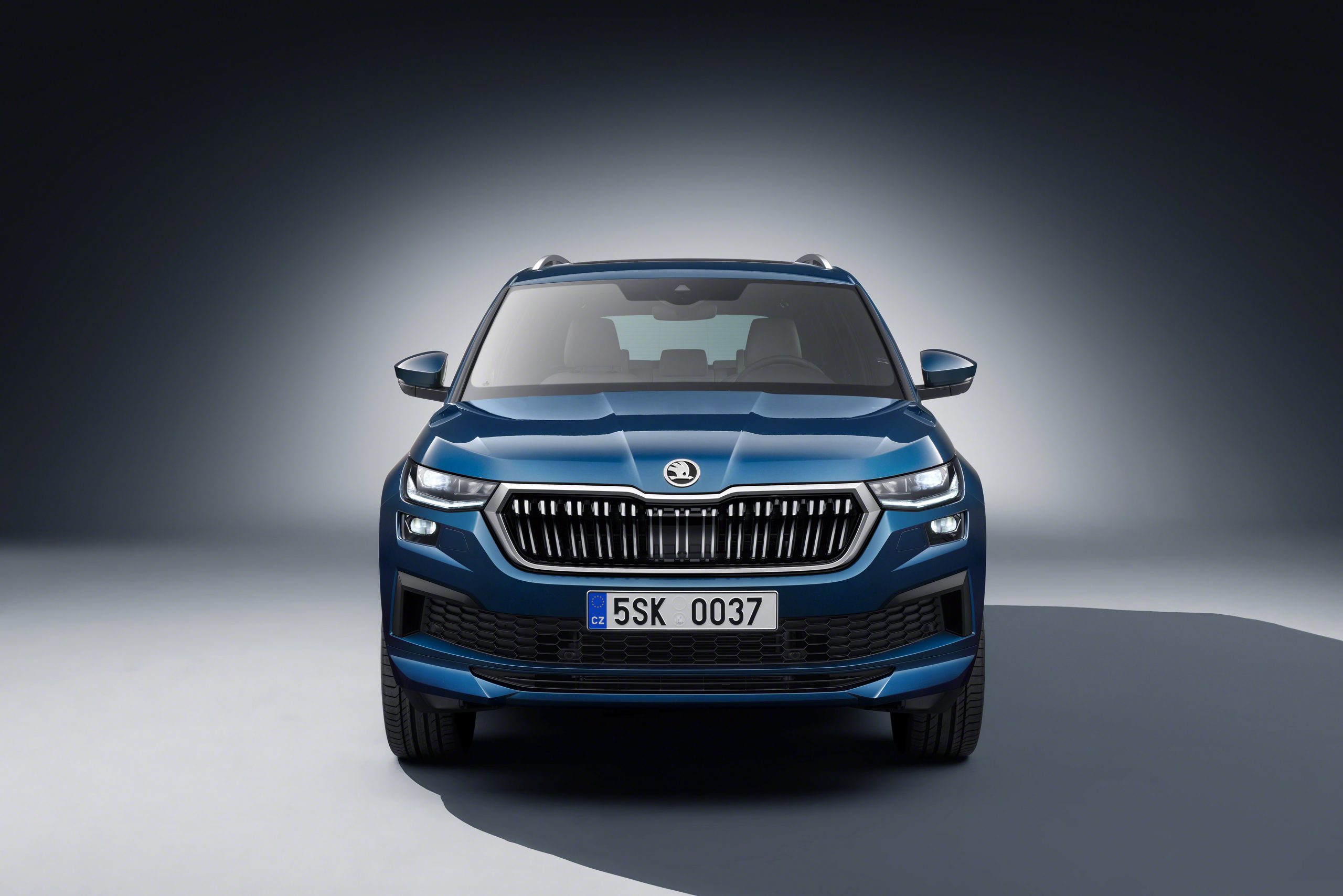 Revamp of the Kodiaq: roughly four years after ŠKODA launched the first model in its SUV campaign the carmaker has now upgraded the globally successful Kodiaq. The Czech brand has further developed the emotive design of the Kodiaq, which can also be ordered as a 7-seater, and improved its aerodynamics. For the first time, the range of options for this large ŠKODA SUV includes innovative full LED Matrix headlights. The sporty range-topping Kodiaq vRS has not only had a visual makeover but has also been given a new, more powerful TSI engine. The updated Kodiaq will be available from July.

Thomas Schäfer, ŠKODA AUTO CEO, said: “The Kodiaq was a real game changer for us. It was the first model of our SUV campaign and opened up a completely new, rapidly growing vehicle segment. Our customers and the international trade press appreciate the Kodiaq’s brand-typical qualities, just as they do with our other models: excellent value for money, ample space and comprehensive range of equipment. Now we have further refined the specification of our large SUV, offering even more safety and comfort with new features, such as full LED Matrix headlights and ergonomic seats.”

New front design and full LED Matrix headlights
As a result of a further refined ŠKODA design language, the Kodiaq presents as even more emotive and self-assured. The upgrade will be available in the S, SE and SE L trim levels and in the L&K, SportLine and vRS variants. The S, SE and SE L trims will come with aluminium-effect detail on the front and rear apron, lending the SUV even more off‑road styling. The restyled front with an elevated bonnet and the redesigned, more upright ŠKODA grille reinforce the Kodiaq’s bold appearance. The Czech carmaker’s large SUV features LED headlights as standard and, for the first time, can be equipped with full LED Matrix headlights. New alloy wheels measuring up to 20 inches further enhance the car’s dynamic and striking look. Special Aero wheels, redesigned front and rear bumpers, and the new gloss black rear spoiler and finlets on the sides of the rear window all reduce drag. The Kodiaq vRS now features a distinct, dynamically designed model-specific front bumper.

New-look interior and, for the first time, optional ergonomic seats
ŠKODA takes the look and feel of the Kodiaq’s interior to a new level by providing it with new decorative strips, additional contrasting stitching and enhanced LED ambient lighting functions. For the first time, the range of options for the large SUV includes ergonomic, perforated-leather seats with multiway electric seat adjustment, ventilation and massage function. The optional Eco seats available for the SE and SE L trim levels come with high-quality seat covers made of vegan, recycled materials. The CANTON sound system is another optional extra now offering ten speakers instead of the previous eight, in addition to the central speaker in the dashboard and the subwoofer in the boot.

Optional Virtual Cockpit and enhanced Crew Protect Assist
The Virtual Cockpit with a 10.25-inch display and four different layouts is available as an option for most models but comes as standard for the Kodiaq vRS. Drivers of both the vRS and the Kodiaq SportLine have an additional layout to choose from, the Sport layout. The range of assistance systems now also features an enhanced version of Crew Protect Assist. This new variant has additional radar sensors at the rear to respond to vehicles that pose a risk for a rear-end collision.

New petrol engine for the Kodiaq vRS
The sporty top-of-the-range Kodiaq vRS has not only been provided with a visual makeover but also with a new engine. The 2.0 TSI petrol engine comes from Volkswagen Group’s EVO generation and has a power output of 180 kW (245 PS), making it 4 kW (5 PS) more powerful than the predecessor’s biturbo diesel. At the same time, this engine is more than 60 kg lighter than the TDI. Together with the new 7-speed DSG, which is 5.2 kg lighter, this power unit’s performance is even better. The two other petrol engines, the 1.5 TSI producing 110 kW (150 PS) and the 2.0 TSI with an output of 140 kW (190 PS), as well as the 2.0 TDIs delivering 110 kW (150 PS) and 147 kW (200 PS), also come from Volkswagen Group’s latest EVO generation.

The launch of the Kodiaq marked the start of ŠKODA’s highly successful SUV campaign in 2016. With its striking, emotive design language, high-quality workmanship and outstanding value for money, it immediately won over customers, automotive experts and the trade press alike. The exceptional amount of space this SUV offers, at an overall length of 4.70 m, is particularly impressive. With the optional fold-out third row of seats, the Kodiaq can accommodate up to seven occupants. Alternatively, with the rear seats folded down, the boot can hold 2,065 l of luggage.

Manufactured around the world and a global success
Production of the Kodiaq started in 2016, at ŠKODA’s Kvasiny plant in the Czech Republic. As part of the brand’s SUV campaign, the carmaker invested the equivalent of over 290 million euros in modernising this site by 2018, turning it into a centre of excellence for SUV production. To meet the huge international demand for the Kodiaq, ŠKODA also set up production lines for its large SUV in China, India and Russia in the subsequent years. By the end of March 2021, more than 600,000 Kodiaqs have rolled off the assembly lines worldwide.

The SUV story: ŠKODA took off with the Kodiaq

off-road vehicle was built in New Zealand. It was based on the original Octavia and just under 3,000 units were manufactured. The ŠKODA Yeti paved the way for the modern-day SUV in 2009, before the Kodiaq started ŠKODA’s current SUV family. This has now grown to eight members.

Martin Jahn, ŠKODA AUTO Board Member for Sales and Marketing, said: “The SUV segment is currently the largest in the global automotive market, and it continues to rise. For ŠKODA too, this segment is of enormous importance. In 2020, nearly 40 per cent of all ŠKODAs delivered worldwide were SUVs. By the end of March 2021, we had produced more than 600,000 Kodiaqs worldwide – a great success story for ŠKODA, which we are now set to continue with the revised model.”

The ŠKODA Trekka is the forefather of the Czech brand’s current SUV family. It was built in New Zealand in 1966 on the basis of an Octavia chassis. By 1972, almost 3,000 vehicles had been made, some of which were exported to Australia, Fiji, Samoa and Vietnam. In 2009, the strikingly designed and super-practical Yeti was ŠKODA’s first modern-day SUV, before the Kodiaq ushered in the brand’s major SUV campaign in 2016.

SUV family grows to eight members
The optional 7-seater Kodiaq was followed by the Karoq in 2017, and the brand’s first

vRS-variant SUV – the Kodiaq vRS – joined the family one year later. The compact Kamiq (a new entry-level model) and the Kodiaq GT SUV coupé were also launched in 2018 – the Kodiaq GT SUV coupé exclusively available for the Chinese market. The ŠKODA Kamiq GT was another exclusive for China and introduced in 2019. The Kamiq city SUV based on the MQB-A0 platform was launched in Europe in the same year. In 2020, ŠKODA entered the age of electromobility, continuing its successful SUV story. With the launch of the all-electric Enyaq iV, the Czech carmaker adapted its SUV nomenclature to aptly start with the letter E. The Kushaq, developed specifically for the Indian market, is the latest member of the brand’s SUV family. Overall, ŠKODA has produced more than two million SUVs to date. In 2020, nearly 40 per cent of all the vehicles delivered to customers were SUVs.

The ŠKODA Kodiaq is in demand worldwide
The Kodiaq is a true global success for ŠKODA. By the end of 2020, the company manufactured and delivered more than 600,000 units of its large SUV. Due to high demand, the Kodiaq is being produced in China, India and Russia as well as at ŠKODA’s domestic plant in Kvasiny. The Kodiaq is delivered to around 60 markets across the globe.