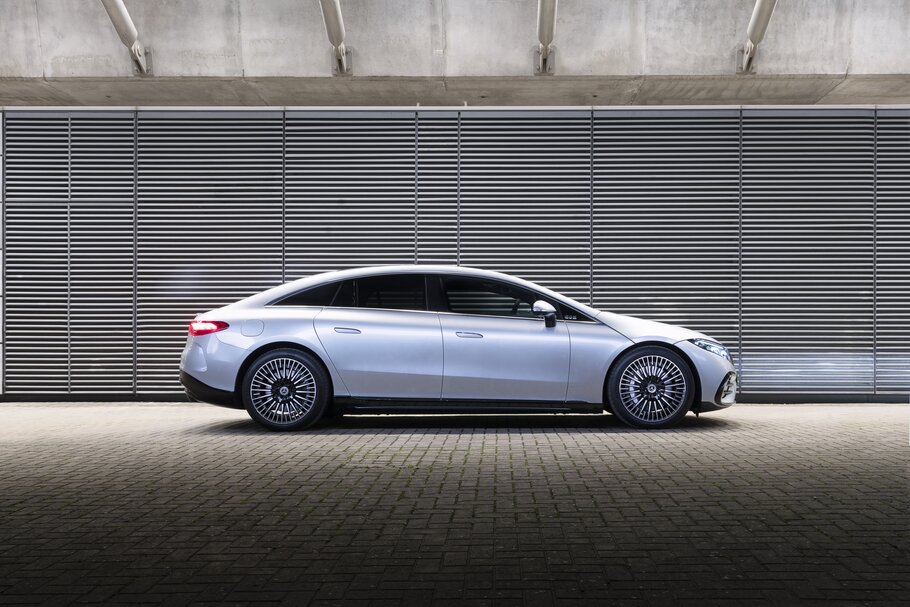 Important factors for the life cycle assessment of an electric car include the production of the high-voltage battery and the external charging processes during vehicle operation. Here Mercedes-Benz assumes two different requirements in its model calculations: in the “EU electricity mix” scenario, the European electricity mix is taken into account for the charging of the high-voltage battery; in the “regenerative” scenario, on the other hand, renewably produced energy is used for the production of the battery cells and for the charging processes in the vehicle use phase. Both scenarios are based on a mileage of 300,000 km for the EQS.

Interesting facts & figures: EQS sustainability at a glance
The EQS battery cell cathodes have a cobalt content of ten percent.

The components of the EQS made proportionately from resource-saving materials (recycled and renewable raw materials) weigh 80 kilograms.

With its Cd figure[2] from as low as 0.20, the EQS is currently the world’s most aerodynamic production car. Compared with an aerodynamically good electric car (Cd figure 0.23), this delivers a range advantage of four (WLTP cycle) to five percent (Mercedes long-distance measurement).

The roof of Factory 56, the production facility for the EQS, is equipped with 12,000 photovoltaic modules. These have a maximum output of around 5000 kWp and can thus cover around 30 percent of the factory’s energy needs on an annual average. All in all, the energy requirement of Factory 56 is 25 percent lower than that of other Mercedes-Benz assembly buildings.

Around 40 percent of the roof area of Factory 56 is greened, and recycled concrete was used for the first time in the head building.

In 2022, a total of eight Mercedes-EQ electric vehicle series will already be produced at seven locations on three continents.

The floor coverings use a new yarn made of regenerated nylon. One tonne of this yarn (brand name ECONYL) saves more than 6.5 tonnes of CO2 compared to virgin material.

After use in the car, a second life is possible for the batteries: for example, in an energy storage system from Mercedes-Benz Energy. Together with its partners, the company has already brought three large-scale storage systems with a total of around 50 MWh of energy from automotive battery systems onto the German grid. The first 2nd-life battery storage system was connected to the grid in October 2016 in Lünen, Westphalia.

The majority of suppliers, who account for around 90 percent of the the annual purchasing volume, want to supply only CO2-neutrally produced parts in the future. They have declared their willingness to do so in an ‘Ambition Letter’. From 2039 at the latest, only production materials which have been produced on a CO2-neutral basis in all value creation stages will be allowed through the Mercedes-Benz plant gates.

Mercedes-Benz started to create transparency in the complex cobalt supply chains for battery cells back in 2018. For this purpose, 120 suppliers were identified and 60 audits were carried out according to the guidelines of the OECD (Organisation for Economic Co-operation and Development).

The production of the highly complex lithium-ion batteries at the Hedelfingen plant, part of the Mercedes-Benz site in Stuttgart-Untertürkheim, will be CO2-neutral from 2022. As part of strategic partnerships, Mercedes-Benz has also agreed to purchase battery cells manufactured in a CO2-neutral manner, starting with the EQS.

Since 2005, Mercedes-Benz has published “360° Environmental Checks” as the result of the systematic integration of environmental aspects into product development in accordance with the ISO/TR 14062 standard.