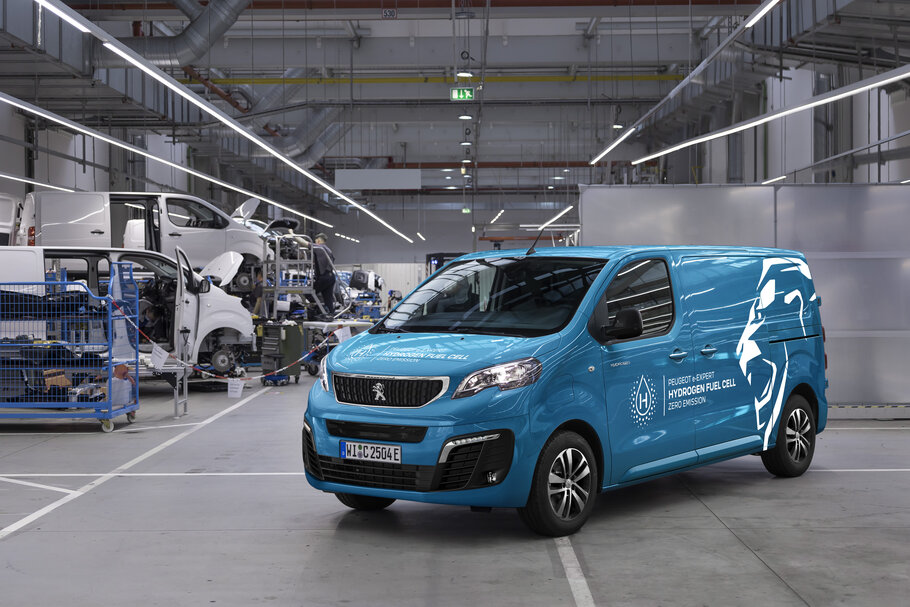 The very first production hydrogen vehicle from PEUGEOT left the production line on December 13th 2021 – with MICHELIN group the first customer of the revolutionary new PEUGEOT e-EXPERT Hydrogen. With the e-EXPERT Hydrogen, PEUGEOT has become one of the very first manufacturers to offer, in addition to its combustion and battery electric variants, a hydrogen fuel cell vehicle in the commercial vehicle segment.

The PEUGEOT e-EXPERT Hydrogen van integrates a new hydrogen fuel cell electric powertrain in the engine compartment and underbody – resulting in no compromise in terms of load volume compared to the diesel variants of the EXPERT, and a low centre of gravity – improving vehicle stability and safety.

Based on the battery powered e-EXPERT, the PEUGEOT e-EXPERT Hydrogen is now available for deliveries, with the first customer, WATEA by MICHELIN, the young subsidiary dedicated to green mobility solutions in the MICHELIN group, receiving its hydrogen van before the end of the year.

The e-EXPERT Hydrogen is the latest development of PEUGEOT’s “Extended power of choice” strategy, enabling customers to choose from a wide range of powertrains that best meets their needs.

PEUGEOT’s e-EXPERT Hydrogen model comes just 15 months after the launch of the battery-powered e-EXPERT, which was named International Van of the Year in early 2021 and is the sixth PEUGEOT vehicle to win this prestigious award since 1992.

The e-EXPERT Hydrogen is available in two lengths, Standard and Long. Both variants share identical load volumes with the diesel and petrol variants, with up to 6.1m3 of load capacity inside. With a maximum payload of up to 1,000kg and a towing capacity of 1,000kg – the e-EXPERT Hydrogen is a practical, zero emissions solution for a variety of businesses and fleets.

Linda Jackson, CEO of the PEUGEOT brand, said: “With the e-EXPERT Hydrogen, PEUGEOT is taking the lead in a future zero emission technology that is particularly relevant to the light commercial vehicle market: hydrogen electric technology allows intensive daily use without the need for recharging, a decisive advantage for professionals who, in a single day, have to cover several hundred kilometres on the motorway and then enter emission-restricted urban areas. The hydrogen technology developed by Stellantis and implemented in our PEUGEOT e-Expert Hydrogen makes such uses possible.”

Hydrogen is now becoming a major pillar of the energy transition with the announcement of different international projects. Thanks to government plans, the number of hydrogen stations in Europe is constantly increasing and PEUGEOT is working directly with energy suppliers to propose package deals.

The new model is built on the production lines of the Stellantis competence centre dedicated to hydrogen technology. It is not currently on sale in the UK.

New Amarok: From South Africa to the World