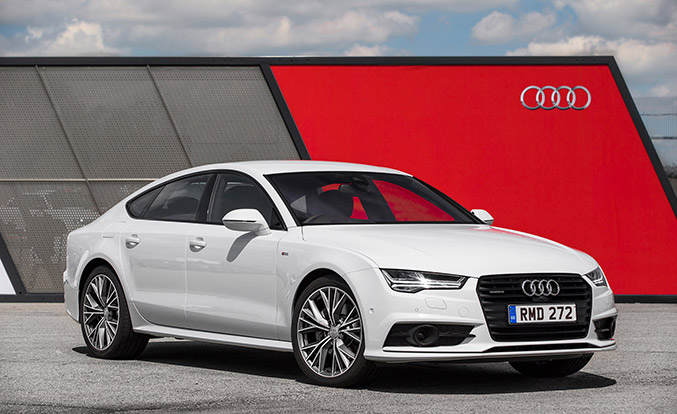 A new range of Audi A7 Sportback models, including a 60mpg V6 TDI ultra, becomes available in the UK this week, further enriching the blend of grand tourer elegance and executive car versatility already offered by the acclaimed ‘five-door coupe’. Priced from £45,875 OTR, the latest, simplified A7 Sportback line-up combines enhanced EU6-compliant engines with styling revisions, new LED headlights and tail lights including ‘sweeping’ indicators, further improved interior decor and upgraded infotainment. The first examples are set to arrive with UK customers in the last quarter of 2014.

First in line in the new order for the latest A7 Sportback is SE Executive specification, which replaces the Standard and SE options in the outgoing range. Highlights which elevate this comprehensive new trim level above its predecessors include all-weather LED headlights, sweeping rear indicators, 19-inch alloy wheels and deluxe four-zone automatic air conditioning. It also includes comforts such as heated and Milano leather-upholstered seats with electric adjustment, MMI navigation, Audi Music Interface, front and rear acoustic parking sensors and a powered tailgate, to name but a small proportion of the features.

S line specification is next in line, and is enhanced in the latest range by larger 20-inch alloy wheels (up from 19 inches), sweeping function indicators at the front and rear and Matrix LED headlights. Each of these advanced units features 25 separate LED bulbs which are individually dimmed when sensors detect oncoming or following traffic to automatically divert light around obstacles without the need to deactivate the high beam setting.

In a new departure for the A7 Sportback range, the sports suspension that is included as part of the S line specification can be ‘deselected’ in favour of standard suspension at no extra cost if required, and for an even greater focus on comfort the wheel size in this version can be dropped down to 19-inch, also at no cost. Inside, in another break with tradition, the normally black S line colour scheme can also now be replaced by a new Lunar silver colour option.

At the upper end of the range, Black Edition, S7 Sportback and RS 7 Sportback models also of course benefit from all the relevant styling and equipment enhancements.

From launch, these improved specification levels will be available in combination with a choice of six powerful and highly efficient engines offering enhanced power outputs ranging from 218PS to 450PS, and complying with stringent EU6 emissions legislation.

A particular highlight in the new line-up will undoubtedly be the A7 Sportback ultra, the first in this new range of overtly efficiency focused models to combine frugality worthy of the ultra badge with six cylinder power. The heavily modified single-turbo 3.0-litre V6 is capable of returning an outstanding 60.1mpg, corresponding to CO2 emissions of 122 grams per kilometre, and a seven-speed S tronic twin-clutch transmission newly developed specifically for front-wheel-drive applications helps to maximise its 400Nm peak torque output and delivers keener response than the multitronic CVT transmission used by its closest predecessor. In the TDI ultra the 0-62mph sprint takes just 7.3 seconds on the way to a top speed of 149mph.

The 218PS V6 TDI engine is also available in the new range in conjunction with quattro permanent all-wheel-drive and seven-speed S tronic transmission, a configuration that is shared by the 272PS single-turbo V6 which slots in above it in the range. In the top TDI tier, the mighty 320PS twin turbo BiTDI channels its 650Nm via the eight-speed tiptronic automatic. As an alternative to diesel power, a supercharged six-cylinder petrol unit delivering 333PS and linked to the seven-speed S tronic transmission and quattro all-wheel-drive is also available. 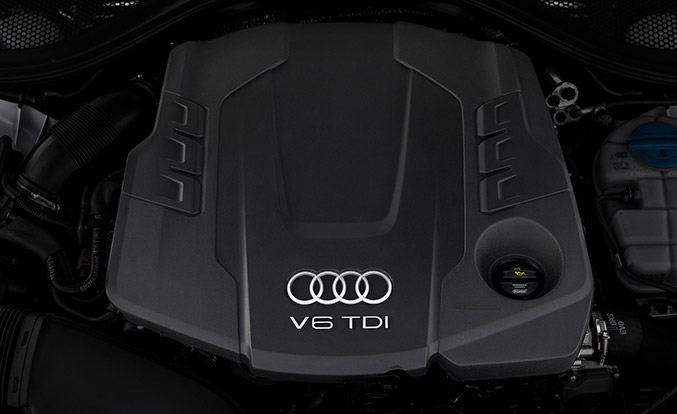 V8 twin-turbo petrol power is reserved for the new S7 Sportback and RS 7 Sportback models, the latter set to open for order next month ready for first deliveries in the first quarter of 2015. The S7 Sportback now benefits from a 30PS power upgrade to 450PS while the RS 7 Sportback uses its 560PS output to deliver a remarkable sub-four-second 0-62mph sprint time. The S7 Sportback uses the seven-speed S tronic twin-clutch and the RS 7 Sportback the eight-speed tiptronic, and the units in both cars employ Cylinder-on-Demand technology to make the most of every tank of fuel. The new S7 Sportback shows a slight improvement in economy despite its power boost, returning up to 30.4mpg according to the official combined cycle test, and benefits from a 4% or 10g/km reduction in CO2 output to 215g/km. In the RS 7 Sportback, engine revisions have also brought slight improvements to CO2 output and economy, which now stand at 221g/km and 29.7mpg (according to the combined cycle test).

At surface level, the most striking changes aside from the new light units are to the single frame grille, which adopts the latest hexagonal design, to the bumpers, which have been subtly resculpted, and to the tailpipes, which now have wider, trapezoidal apertures.

In the stylishly finished and characteristically high quality interior,  the ambiance is further enhanced in the latest range by new interior materials, new inlays and new colour options for the trim elements and seat coverings. In S line versions, which were previously finished exclusively in black, the Lunar silver colour scheme which is newly available in conjunction with this specification also extends to the upholstery.

The MMI radio plus operating system with DAB digital radio is standard and can be supplemented as an option with a head-up display that projects all important information onto the windscreen. It now works with the latest generation of the Audi modular infotainment system built around the Multi Media Interface.  The top system uses a powerful new graphics processor from Nvidia and includes MMI touch, enabling the driver to scroll and zoom in lists and maps via a touchpad.

The highest specification MMI Navigation plus system with its powerful hard disc-based mapping can be supplemented by Audi connect, which in the new A7 Sportback now links the five-door coupe with the Internet via the latest LTE high-speed data transmission standard for ultra-fast 4G click-through and download functionality. The Audi phone box option is also now available – it enables occupants to connect their mobile phones to the car’s antenna for improved reception simply by placing them in the phone box compartment. The top of the hi-fi line is the Bang & Olufsen Advanced Sound System.

As before, numerous state-of-the-art assistance systems are also available to make driving safer and easier. Further improvements have been made to the night vision and active lane assist systems in particular, the latter now featuring new active lane centring technology. 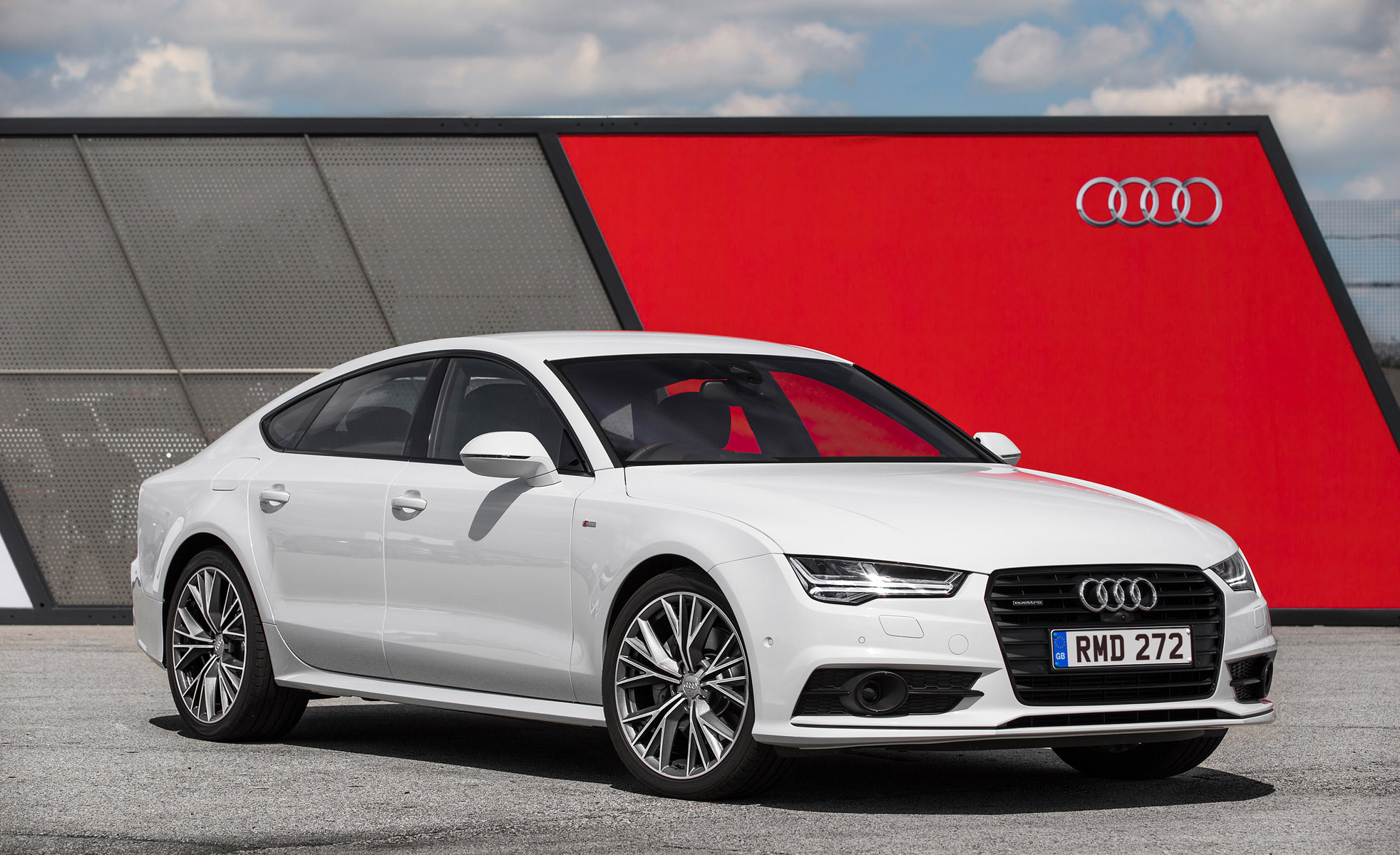