New Abarth F595: a showcase of Formula 4 technologies for the road 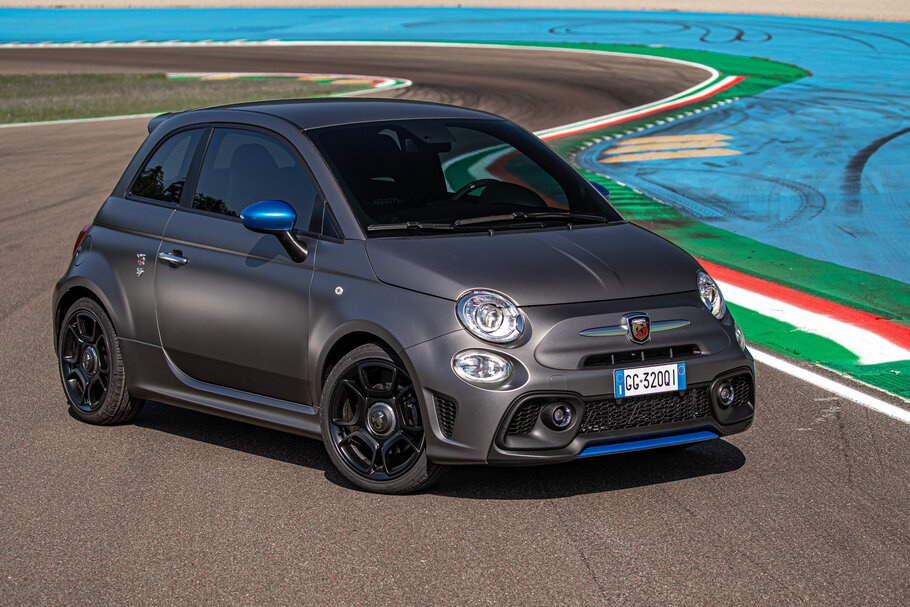 Engine derived from Formula 4 technology
Outstanding performance and response are the main features of the 165hp 1.4-litre Euro 6D-Final-compliant T-jet engine, fitted with the supercharged Garrett turbo with a geometric compression ratio of 9:1, delivering 230 Nm of torque from just 2,250 rpm. Top speed is achieved at 135mph, whilst 50 to 70mph pick up is achieved in 7.8 seconds (in fifth gear).

The bold Abarth F595 offers a Record Monza Sovrapposto active exhaust, now evolved into a new configuration with four pipes – two on each side and stacked vertically. Drivers can control the active exhaust valve by a simple press of the Scorpion button on the dash – this increases the sound of the F595 as required.

Design
Available in hatchback and convertible versions, the new Abarth F595 features Rally Blue design cues as highlighted in the rearview mirror caps and the front and rear bumpers. The sporty look is further enhanced by the Sport 17-inch Formula alloy wheels, the F595 identification badge on the rear and fog lamps.

Alongside activating the active exhaust valve, the Scorpion mode selector also acts on peak torque delivery by re-calibrating the power steering and engine response to the accelerator pedal, making them more responsive.

Last but not least, the F595 is equipped with the 7-inch HD Uconnect™ system with DAB radio, built-in Apple CarPlay and Android Auto™ compatibility as standard.

F4 in Italy and Germany: Abarth on track to develop the drivers of the future
The Italian F4 Championship Powered by Abarth, is now in its eighth season, whilst Germany’s ADAC F4 series is currently in its seventh championship. In 2014, Formula 4 selected Abarth as the technical partner to supply its engines. Courtesy of its great weight-to-power ratio, the powerful and reliable 1.4-litre, 160-hp Abarth Turbo engine fitted to the Tatuus single-seaters guarantees high performance (a maximum speed of 150mph; 0-62mph acceleration in around 5 seconds). Its renowned reliability also means the cost of a season in terms of the teams and drivers can be kept under control. It therefore meets the FIA requirement of training for the Formula class drivers of the future, in line with the FIA’s and Abarth’s values of developing young talents. Since 2014, more than 350 drivers have taken to the track in an F4 single seater powered by Abarth.

50 years of Formula Italia
In 1971 the Italian Automotive Sports Commission (CSAI) collaborated with Fiat on the establishment of a new championship reserved for young Italian drivers, aimed at democratising motorsport by proposing a single-seater identical for all and at a low cost. In August that year, the Abarth brand – merged into Fiat in the meantime – therefore built the first prototype designed by Mario Colucci under the supervision of Carlo Abarth and named it the Abarth SE025. Fitted with the 4-cylinder, 1.6-litre Fiat engine with a twin overhead camshaft, the same as in the Fiat 124 Sport, the single-seater had a highly durable steel tube frame, complete with built-in roll bar. All the components were chosen by Carlo Abarth and were taken from mass-production Fiat, Lancia and Abarth cars. One of the earliest testers worthy of mention was the renowned Arturo Merzario. Formula Italia was an immediate success: demand was so great that the first deliveries were only made in mid-May 1972. It made its racing debut on 29th June 1972, on the Monza circuit, where Paolo Bozzetto came in victorious. Until 1979, many young drivers took to the track and some of them made it to the Formula 1 World Championship, including Bruno Giacomelli, Riccardo Patrese, Siegfried Stohr and Piercarlo Ghinzani.