Monsoons and mountains prove no match for the new Fabia 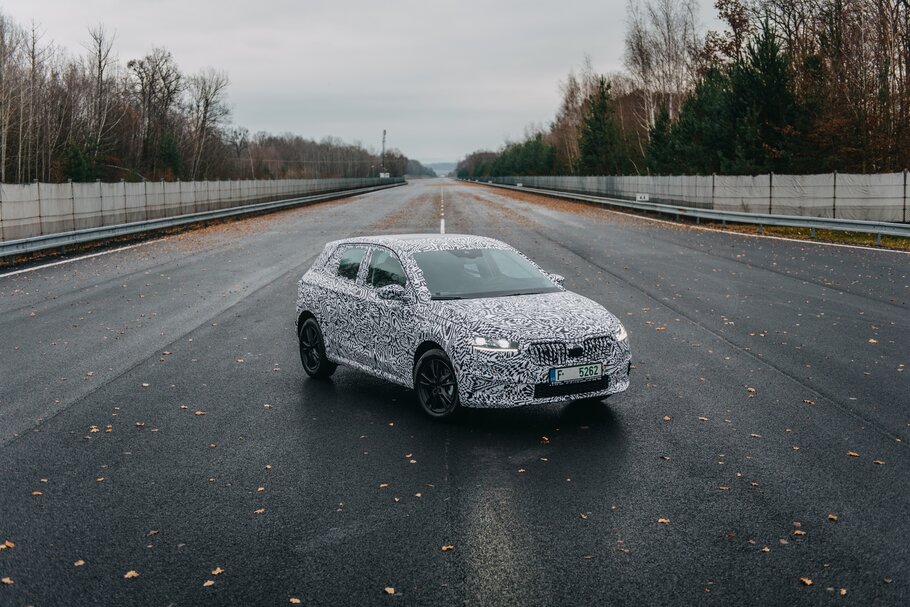 Thanks to a seemingly ordinary-looking trailer called a ‘towing dyno’, engineers are able to recreate a driving experience as intense as ascending the Grossglockner peak in the Alps without ever leaving the flat terrain of the test facility.

With a built-in dynamometer producing up to 150kW of power, the trailer can change the resistance felt by the car in line with settings entered by technicians. By braking its wheels, the trailer can generate up to 9kN of force. “In this way we can simulate various driving conditions, including the profiles of real hills or driving with trailers of various weights,” explains Pavel Kolajta, who oversees functional testing of the new ŠKODA Fabia.

Testing cars under demanding weather conditions is a more established part of the process. “With the car under the maximum load, it is tested in temperatures as low as -30 °C and over 45 °C, in snow, on ice, in dust, and even in simulated monsoon rains,” Kolajta reveals. While such tests have remained largely the same for decades, there have been major shifts in the evaluation of other areas of the car’s design, particularly those which have become more complex in recent years. Assistance systems, safety devices and the car’s electronic equipment, for example, must all be rigorously examined to ensure they function as intended.

‘Stress testing’ of the car’s safety is one of the most stringently tested criteria, with the demands placed on the car increasing with every new generation. “Our principal mission is to protect the lives of the car’s occupants and also other road users like pedestrians, cyclists and motorcyclists. Simulations show us the right way to achieve that as effectively as possible, and physical tests confirm that the chosen solution is correct and safe,” says Csaba Sirgely, one of the development engineers responsible for the Fabia model’s safety.

For this reason, the car and its various parts are subjected to a series of impact and crash tests. Right from the start, computer simulations are used to design the surface panels of the body, like the bumper cover and bonnet, for example, which are then tested using dummies or “impactors”. The goal is to ensure the car is pliant in a collision. “When developing the new Fabia we shot impactors at the car and its parts over 200 times. But for every test of that kind there are around 140 virtual simulations that help us get the parts right before the test proper,” Sirgely explains.

In classic crash tests this ratio is even greater, with around a thousand simulations for each crash test, he says. “Development and physical testing take place from the prototype to the first series. Thanks to our modernised Crash Lab at Úhelnice we can put several dozen cars through tough crash tests at every phase of development. Various parts are also tested: special skids test the durability and strength of restraint systems; the optimal working of airbags is tested for all the different types of crash test dummy; and various types of collision are tested.

“During static tests we activate the passenger’s airbag around 300 times, for example. Every airbag in the car is tested roughly the same number of times, which results in a huge number of tests that are done at temperatures ranging from -35 °C to 90 °C,” Sirgely says.

Aerodynamic and efficient
Like safety, aerodynamics is an area that has experienced a leap forward in recent years. The new ŠKODA Fabia is the most aerodynamically efficient car in its segment thanks to the hard work during development and testing. “Getting the aerodynamics right for each type of car is a specific process. Different body types and shapes, dimensions, the platform and the wheelbase all affect the airflow around the car in different ways. There’s no guarantee that what works on one car will work on another,” says Vít Hubáček, who is responsible for aerodynamics development.

Such excellent aerodynamics help cut fuel consumption and reduce CO2 emissions. “Even though the new Fabia is bigger than its predecessor and its front area has increased by about 3%, we managed to reduce its drag by almost 10%. In the standardised WLTP cycle that means a reduction in CO2 emissions of almost 3g per kilometre,” explains Hubáček.

Painstaking optimisation of the car body is just one of a series of new technical solutions: another example is found in the ‘cooling shutters’, a first from ŠKODA in this segment, which prevent air from entering the engine bay, thereby improving airflow around the car. ‘Air curtains’, meanwhile, are used extensively on the chassis: these are vents in the front bumper which improve airflow around the front wheels. One speciality of the Fabia will be light-alloy wheels with special aerodynamic details to stabilise airflow around the wheels.

The fourth generation ŠKODA Fabia spent more than one hundred hours in the wind tunnel, while also undergoing more than 3,000 computer simulations that took up tens of thousands of hours of computing time. “Physical measuring took place on around 20% of the tested alternatives, with the remaining 80% measured in the virtual environment,” says Hubáček. “Physical testing shows us how much the aerodynamic properties changed, but simulations also tell us why they changed. Even a small geometric change on the front part of the car can cause a significant change in airflow at the rear, and vice versa.”