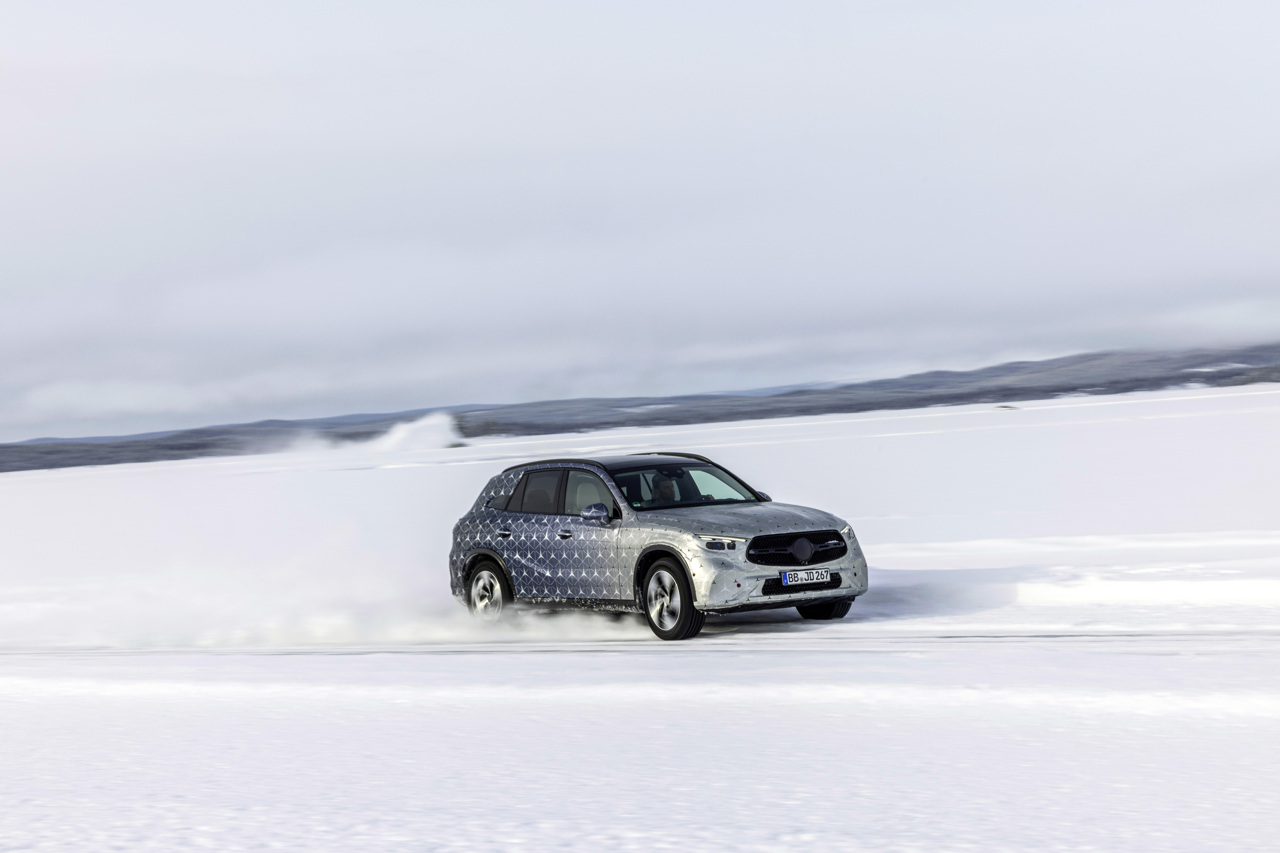 While almost springlike temperatures already prevail in Sindelfingen, the next-generation GLC has to prove its full reliability even in the most difficult weather conditions as part of its final winter test. And the demanding test site in Arjeplog, Sweden, with snowy and icy roads, piercing winds and temperatures down to minus 30 degrees, provides the perfect location for this. During the final application and test work, Mercedes-Benz checks the effects of extreme cold on handling, ergonomics, thermal management and interior comfort, thus guaranteeing the results of the “digital development work” in actual driving operations.

The winter testing is an essential and important quality component of the development process. With it, Mercedes‑Benz ensures the customer readiness of new model series as part of the last maturity level loop. A test centre set up specially for winter tests in Lapland in northern Sweden provides extensive testing possibilities: Here there are hill climbs with gradients of up to 20 percent, test tracks with varying coefficients of friction, a handling course and skid pads on almost sheer ice. These challenges place extremely high demands on the powertrain and control systems.

The technologies used in the GLC, in particular the optional Driving Package with air suspension/adjustable damping and rear axle steering, together with the further optimised tuning of the control systems, combine maximum traction and driving safety with hallmark Mercedes comfort characteristics. The new GLC demonstrates its excellent heat-up performance and thermal comfort, impressive overall acoustics and top driving comfort, maximum driving safety and outstanding driving dynamics as well as high performance of its major assemblies.

During the final tests, the last details are analysed by the engineers on site in close coordination with the relevant development departments. If the GLC passes everything successfully, the start of the production tests is confirmed. At the same time, several 100,000 km are covered with the vehicles in a time lapse in various endurance tests as part of an endurance test run programme that is planned in detail. In a parallel process, cars produced locally in China are tested so that they, too, achieve the high Mercedes‑Benz quality standard.

The results show: the next-generation GLC is able to defy ice and snow as well as extreme cold and can master even the most demanding test cycles.

The new GLC – more electric than ever
With more than 2.5 million vehicles delivered since 2008, the GLC (including its predecessor, the GLK) has become a popular mid-size SUV and segment leader worldwide. For several years, the GLC has even been the best-selling model series from Mercedes‑Benz to date. The third generation of the GLC will now follow on from this success story in the autumn of 2022. It builds on the strengths of its predecessor and presents itself with the high recognition value and technical highlights of the current S- and C-Class. From infotainment and a digitalised interior through to AIRMATIC and rear axle steering, as well as modern petrol and diesel engines that are 100 percent electrified. As a plug-in hybrid, the “newcomer” will be able to cover well over 100 kilometres in pure electric mode and even travel off-road without CO2 emissions. The new GLC is the most dynamic SUV from Mercedes‑Benz – on any terrain.

The most important highlights of the new GLC:

Assistance systems
The latest generation of the Driving Assistance Package contains additional and enhanced functions compared with the previous series. These reduce driver workload in day-to-day situations, for more comfortable and safe driving. When danger threatens, the assistance systems are able to respond to impending collisions as the situation demands. The operating principle of the systems is visualised on the driver display by a new display concept.

Efficient technology 100 percent hybrid
4-cylinder M254 petrol engine with 1999 cc displacement, outputs of up to 190 kW or 400 Nm of torque and all the innovations of the modular engine family. They include NANOSLIDE® cylinder coating, CONICSHAPE® cylinder honing (trumpet honing) and the exhaust aftertreatment system positioned directly on the engine.

4-cylinder OM654M diesel engine with 1993 cc displacement, outputs of up to 195 kW or 550 Nm of torque and, depending on the output level, with one- or two-stage turbocharging. Its exhaust gas aftertreatment includes:

All engines are electrified with a 2nd-generation starter-alternator integrated into the transmission with an output of 17 kW and 250 Nm of torque in conjunction with a 48-volt on-board electrical system.

The plug-in hybrids (2 petrol, 1 diesel) are also based on both engines. The 4th generation electric motor is integrated into the traction head of the 9G‑TRONIC automatic transmission, which has been specially developed for this application. The power and torque of the electric motor are 100 kW and 440 Nm, respectively.

With an electric range of well over 100 kilometres according to WLTP, the plug-in hybrids of the GLC raise the bar for all-wheel-drive SUVs.

The road to series production maturity
Ever since the invention of the automobile by Carl Benz and Gottlieb Daimler, Mercedes‑Benz has been intensively testing its products before delivering them to customers. Systematic vehicle testing is an essential core competence in vehicle development to ensure the highest quality standards of the products and the best customer experience. Simulation, calculation and digital preliminary design of all components and the entire vehicle serve as early validation and are prerequisites for efficient and short development processes. Before a vehicle goes into series production, each component and, above all, the integration of the individual functions into the overall vehicle, must reach a defined level of maturity. Initial tests in a few prototypes are used for the preliminary validation of, for example, drive trains or chassis systems. The combination of digital design and trials in major assembly carriers now already enables Mercedes-Benz to produce the first target vehicle from series tools.

The GLC of the 254 model series is based on the successful concept of the predecessor 253 series. The technical basis of the GLC is the current C-Class (drive architecture, MBUX), which has been systematically adapted and enhanced for use in a mid-size SUV. The basic safeguarding was therefore done with the C-Class trials. For the GLC, the tests were supplemented with special SUV requirement profiles, such as the safeguarding of off-road properties.

The most important trial steps in brief: