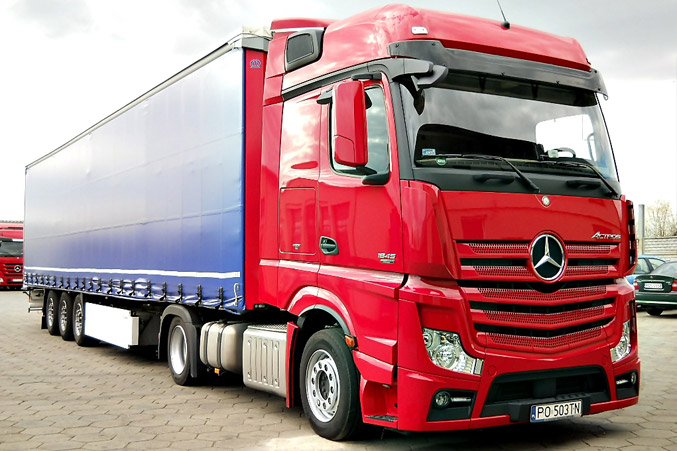 As one of the most popular motor manufacturers in the world, Mercedes-Benz has a reputation for providing elegantly designed and expertly engineered vehicles which meet the needs of a wide variety of customers. One of the first cars in the world was a Benz Patent-Motorwagen which was built in 1886, and since then the company has gone from strength to strength, moving with the times to provide the perfect vehicle for anyone who is in the market for a practical yet stylish ride.

Like everything turned out my Mercedes Benz, the Actros is the perfect combination of style and substance. Suitable for haulage and distribution, it is a truck designed to be comfortable and efficient over long distances and the design has been updated and improved over the years since it was first produced. The Actros is available with a choice of engines in V6 or V8 versions which range from 310 to 460 horsepower, so there is plenty under the bonnet to give any trucker an easy ride. Either option has a control unit which monitors the conditions under which the engine is operating in order to vary the engine pressure to maximise efficiency. It is this attention to detail which makes the Actros a firm favourite amongst those who appreciate its impressive credentials. For details of the configurations available, there is plenty of information here.

A truck to appeal to everyone

The Actros has won the coveted International Truck of the Year award twice, proving that it has what it takes to impress both the critics and those who are actually behind the wheel. One of the key components in its ongoing success is the fact that the ‘Telligent gearbox’ uses a pneumatically actuated system which is connected to the driver’s gear lever and automatically recognises which gear the truck should be in. This gives the gearbox a much longer life span and enables smoother shifting which can be a real advantage for newer drivers who may not yet be used to selecting the most appropriate gear.

As any driver will tell you, a cab’s comfort level is one of the most important things to consider when choosing a truck. When you spend so much time in a small space, you need to ensure that everything is designed to make life on the road as pleasant as possible. Minimising engine noise, reducing the amount of movement experienced by the driver and providing as much room as possible can all make a huge different to the driving experience, and these have all been taken into consideration during the design of the Actros. The little touches make all the difference, such as the heater which can be programmed to come on before the driver gets into the truck and the fully adjustable seat which is pneumatically suspended in order to provide as comfortable a ride as possible.

There are even different cabs designed to suit different purposes including those designed for construction which have higher bumpers to enable them to move around building sites without hitting any obstacles. Those designed for distribution have bunks to afford the drivers a good night’s sleep, and there are also cabs which are aimed at those travelling with passengers and include enough space for them to move freely around the cab when the vehicle is stationary.

The Actros has a number of options which are designed to make this one of the safest trucks on the road, including lane assist which alerts the driver if they drift over the lines, intelligent cruise control which activates the brakes if a vehicle in front stops suddenly, a radar which alerts drivers to vehicles in their blind spot and many more safety features which are appreciated by drivers who like to feel secure while they work. Whatever you want from a truck, there is a version of the Actros which ticks all the boxes.

Volkswagen Sharan with new TSI and TDI Engines from 2016

The Vivaro: A Van with Drive