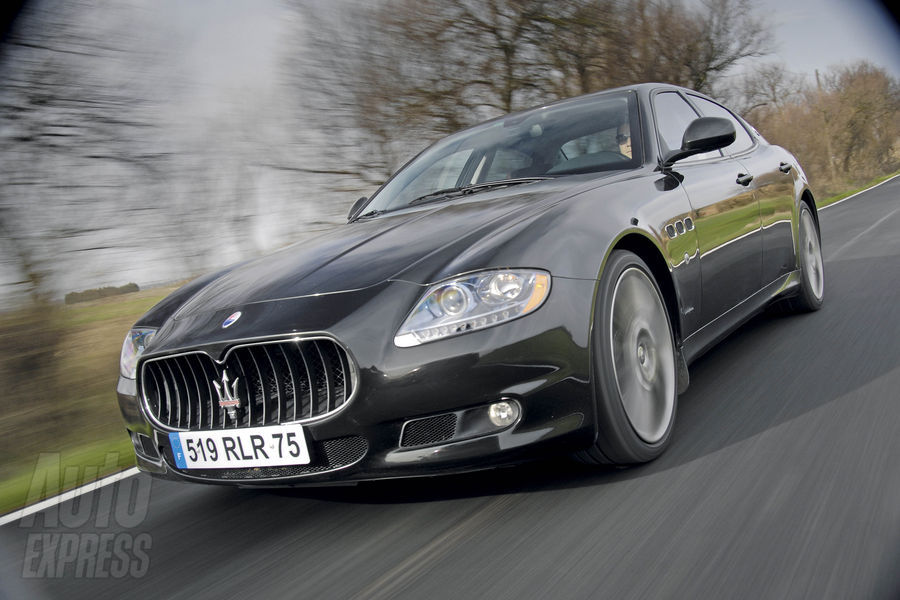 A refined luxury saloon one minute, a hard-edged supercar the next. Maserati says its new Quattroporte Sport GT S offers the ultimate Jekyll and Hyde driving experience – but is this latest change for Italy’s popular rival to the Mercedes S-Class a tune-up too far?

As with the standard model, the GT S shares its 4.7-litre V8 engine with the GranTurismo S. But, thanks to a sports exhaust, power is up 9bhp to 434bhp while torque climbs to 490Nm. A reworked automatic gearbox has boosted shift times, while the suspension set-up has been stiffened and lowered to improve handling. There’s a new soundtrack from the sports exhaust, too, because as well as liberating extra power, it’s been fitted with pneumatic valves which can open up fully for a throaty note.

And what a noise it is! Press the Sport button and at any engine speed, in any gear, the system produces a roar. When you back off, it fizzles and crackles, too – it’s one of the greatest sounds in motoring!

But when it’s time to relax, disengaging the Sport button turns the GT S near silent immediately. Meanwhile, the gearbox works well, shuffling smoothly through its six ratios in auto, and reacting quickly, if a little violently, to full-throttle manual upshifts. On downshifts it blips the throttle.

As well as sounding great, the GT S impresses out on the open road. The slightest squeeze of the throttle is accompanied by the needle sweeping towards the 7,200rpm red line, and it gives you a real shove in the back. To extract maximum performance there’s the ‘MC Start Strategy’ – a flowery name for a sporty launch control system. To make it work, simply turn off the traction control, hold the brake pedal and dial up 2,500rpm before releasing it. The two-tonne saloon is fired from 0-62mph in 5.1 seconds – 0.3 seconds faster than the S.

The Maserati’s nose tucks in eagerly through sweeping bends with little sign of understeer, disguising its weight well.

The firmer suspension keeps the car flatter, but the non-adjustable dampers can feel harsh on a bumpy B-road.

It’s incredible that the Quattroporte’s design still looks fresh and exciting five years after the car was launched – and the Sport GT S adds even more menace. The grille, borrowed from the GranTurismo, features concave fins and the trident logo with red accents, while the door trims and handles are coloured to blend with the bodywork.

At the rear are twin oval exhausts, and customers can specify 20-inch alloys in silver or dark chrome: for a stealthy look, we’d go for the latter.

Inside, new leather sports seats take pride of place. There’s a sprinkling of Sport GT S badging, too. With combined economy of only 17.9mpg, and CO2 emissions of 365g/km putting it in the highest tax band, this might not be the right car for the times, but you can’t fault what Maserati has achieved.

For £5,000 more than the Quattroporte S, the Sport GT S pampers you just as well as lesser, softer models in the range, but delivers an even sharper driving experience when the occasion calls for it.

Rival: BMW 750i
with 401bhp and 600Nm, the 750i’s eight-cylinder twin-turbo delivers silky performance and superb refinement. It can’t match the Maserati for thrills and character, but the chassis is surprisingly agile.