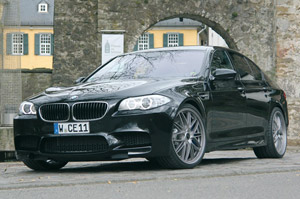 With the new BMW M5 of the F10 series, the automaker from Munich has now introduced the fifth M5 generation since 1984 thus underscoring its unflinching campaign for leadership in the coveted segment of high-performance limousines. With over 20,000 cars of the forerunner sold, BMW has clearly outshined all other competitors in market performance. While the “old” M5 suffered some serious missteps in the area of comfort due to its 5.0 liter V10 Aggregate (507 Horse Power) that was regarded as pretty brutal, the new 4.4 liter V8-Biturbo in combination with the seven-gear double-clutch transmission shows no weaknesses. Despite being boosted by a ten percent added performance capacity (560 Horse Power), the new V8-Biturbo stands out for its low level of fuel consumption that has been drastically reduced by almost 30 percent. Driving performance has already being an undisputed outstanding feature: Acceleration from 0 to 100 km/h in just 4.4 seconds and top speed far exceeding the 300 km/h limit, thus making the F10 generation an ultimate free ride gift from BMW to owners of the M5!

Even though the data and facts of the serially produced M5 are undoubtedly quite impressive, Performance Specialists of Manhart Racing are now offering an initial Tuning Package for the “Bavarian
Predator in Camouflage suit” aimed at pushing the limits upwards by more than just a trifle. In this first performance stage, the V8 Biturbo will henceforth generate almost 633 Horse Power and transfer an impressive maximum torque of 780 Nm to the axle drive shafts.

Plans are currently in top gear to realize further stages with 670 and 735 Horse Power. This will require additional modifications on the turbochargers, downpipes and the exhaust-gas system. For a powerful
V8 sound and a general power boost, Manhart Racing has built a self-made flap-controlled sports-exhaust-gas system made of high-grade steel with four diagonally placed 90 mm exhaust pipe-ends, 200-cellsports catalytic converters and downpipes.

An MHR Club sport coilover kit that is individually adjustable in the traction and compression phase guarantees an optimized driving behavior. Moreover, Manhart Racing offers the self-made MHR Classical Wheel set for the new BMW M5, which perfectly fills up the