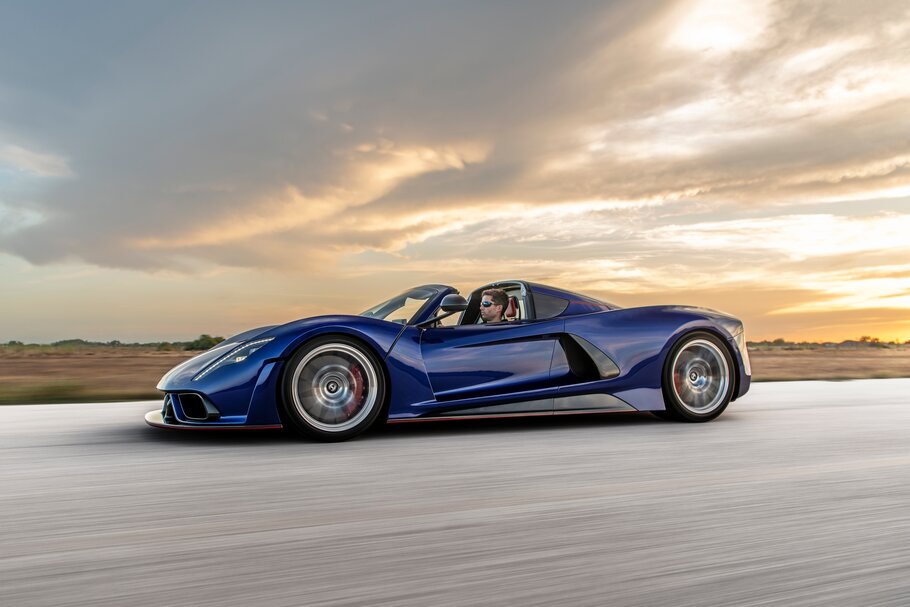 Hennessey, the Texas-based hypercar manufacturer and high-performance vehicle creator, has confirmed that the UK will host the European debut of the Venom F5 Roadster on 31 August at Salon Privé. Less than a week ago, on 19 August, the car was shown to the world for the first time at The Quail A Motorsports Gathering, during Monterey Car Week in California.

The Venom F5 Roadster is based on the sold-out Hennessey Venom F5 Coupe – the two are nearly identical mechanically, yet several attributes set the open-air model apart from its fixed-roof sibling – physically, cosmetically, and emotionally.

Beyond its removable carbon fiber roof, the Venom F5 Roadster features a new engine cover with a tempered glass engine viewing window, which spotlights the massive ‘Fury’ V8 engine in all its glory. The sizeable glass panel can withstand aerodynamic forces exceeding 300 mph and temperatures beyond 540 degrees Celsius (1,000 degrees Fahrenheit).

The open top hypercar is further differentiated through its unique wheels, badging and work-of-art sculptural pedestal – crafted in carbon fiber to store the Roadster’s roof when not in use. Viewed from above, its ‘blade legs’ trace the shape of the car’s rear decklid, while the side profile uses the hypercar’s bodyside air intake form for inspiration. In addition, the sharply angled, streamlined stand displays the ‘Venom F5 Roadster’ script on the front face of the base in the same eight-microns thin aluminum as the car’s ‘H’ nose badge.

At Salon Privé, near Oxford, the Roadster will join its Coupe sibling, the 1,817 bhp monster, engineered to exceed 300 mph, that’s equipped with a twin-turbocharged 6.6-liter ‘Fury’ V8 engine. The hard-top Venom F5 sold out its exclusive 24-unit production run following the 2021 Monterey Car Week. With the Roadster having made global headlines with its appearance at this year’s Car Week, accompanied by multiple customer orders, the Hennessey team anticipates a similarly warm welcome from visitors to the UK event.

John Hennessey, company founder and CEO: “The UK is a very special market for Hennessey with London a major financial center and a hub for global travel, not to mention the passion and enthusiasm of European hypercar buyers. The Venom F5 Roadster is obviously about extreme performance, but it also takes hypercars as an artform to a new level – so, the premium nature of Salon Privé is ideal for its European debut.”

During the Salon Privé event, visitors will have the opportunity to hear the Venom F5 Coupe unleashed as it takes part in the exhilarating Hill Sprint on Sunday 4 September. The Venom F5 is capable of 0-200 kph (0-124 mph) in just 4.7 seconds – performance that is sure to wow the crowds at Blenheim Palace.

The Texas-based hypercar creator has already built nine F5 hypercars for customers and anticipates total F5 production to pass 12 units by year-end. Production rate will increase in 2023 as Coupe build is joined by full-scale production of the Roadster.