Full Details on the Most Extreme Production Seat Leon Ever 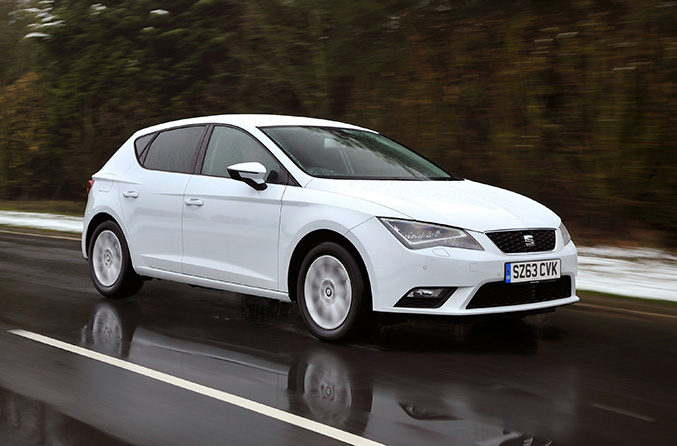 SEAT this month opened the order books on the most extreme production Leon ever – extreme in the environmental efficiency sense. The SEAT Leon Ecomotive is, with a CO2 rating of just 87 g/km, the most CO2-averse conventionally-powered car that SEAT has ever produced.

Launched officially at September’s Frankfurt Motor Show alongside the new Leon ST estate, the Leon Ecomotive is available in all three body styles (SC, five-door and ST) and is priced from just £19,360 RRP OTR.

That outlay buys a three-door Leon SC Ecomotive, but all three versions return the same incredible 85.6 mpg combined fuel consumption. The 87 g/km CO2 figure puts the car into VED Band A, so the tax disc costs exactly nothing per year.

The car’s CO2 emissions figure is a full 12 g/km lower than that of the outgoing, second-generation Leon Ecomotive, despite being more powerful. This is accomplished most notably via a 90 kg weight reduction and a 10% improvement in aerodynamic efficiency.

Power comes from a 1.6-litre TDI diesel engine, mated to a six-speed manual gearbox whose ratios are spaced for optimum efficiency; the transmission is a fundamental difference between the Leon Ecomotive and the standard Leon 1.6 TDI, which itself emits a very modest 99 g/km, equipped with a five-speed manual gearbox.

Other changes over the standard Leon 1.6 TDI include a higher engine output, up from 105 PS to 110 PS, and the fitment of low rolling resistance tyres. To improve aerodynamic performance there’s a body package comprising rear and side spoilers, and the suspension is lowered by 15 mm, while the radiator grille is unique to the Ecomotive. These changes help the Leon Ecomotive travel 11.3 miles further per gallon of fuel than the standard Leon 1.6 TDI, according to their respective combined consumption ratings.

As with every other model in the Leon range, the Leon Ecomotive comes with an Energy Recovery System and a Start/Stop System, the former to capture and store brake energy otherwise lost as heat, which can be used to power electrical systems, and the latter to shut down the engine when the car is at a standstill, preserving fuel.

The Leon Ecomotive doesn’t scrimp on equipment like it does on fuel, thankfully, coming as standard with 16-inch alloy wheels, front fog lights with cornering function, cruise control, a leather steering wheel and gear knob, air conditioning, electric windows all around (aside from SC versions), Bluetooth hands-free phone system, SEAT Easy Connect multimedia system, and a front armrest/storage box; the Leon Ecomotive is based on SE specification.

And until at least the end of 2013, the Leon Ecomotive is eligible for SEAT’s free Technology Pack offer, which endows the car with cutting edge full-LED headlights (including their distinctive strip-LED daytime running lights), satellite navigation and a DAB radio – so every medium-wave radio talk show rant can be enjoyed in crystal clear digital quality.

Steve Mirfin, SEAT UK’s Leon Product Manager, says: “This Leon Ecomotive really moves the game forward for us. Not only is it a lot more efficient than the outgoing car, it’s one of the most efficient medium-sized cars on the market and offers outstanding fuel economy.

“We benchmarked the car against the most popular models in the segment to make sure we’re right at the cutting edge on real-world fuel economy, but also on value, performance and quality. And with the Ecomotive available in all three Leon body styles, its appeal extends to a huge customer base – not least the fleet market, where practicality and running costs are paramount.”