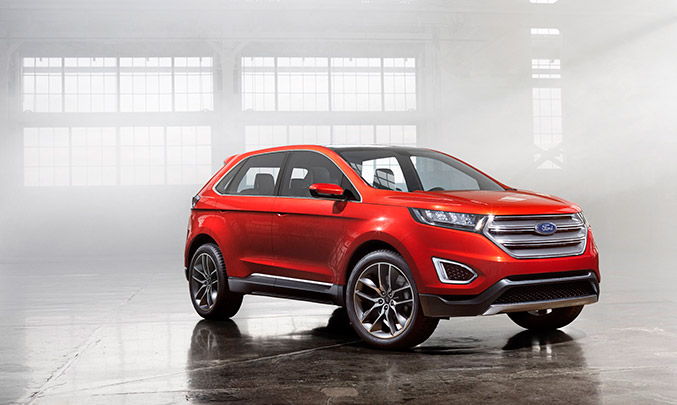 The all-new Ford Edge Concept today made its European debut at Ford’s special “Go Further” event in Barcelona in front of about 2,500 journalists, dealers and employees.

The Edge Concept was unveiled by Jim Farley, executive vice president of Ford Global Marketing, Sales and Service and Lincoln, and gives a strong indication of the technology, design and craftsmanship direction of the company’s new large SUV for Europe.

The concept also showcases potential advanced technologies, including a push-button and remote-operated parking feature customers could use from inside or outside the vehicle.

Already popular in the U.S. and other markets, the Edge will be Ford’s first large upscale SUV for Europe, one of 25 new vehicles that Ford will launch in the region in the next five years.

Edge will join the new compact and agile EcoSport SUV – available to order now – and the recently launched new Ford Kuga as Ford builds on its SUV heritage to offer a comprehensive line-up of redesigned SUVs in Europe.

“Ford’s SUV line-up represents a significant growth opportunity for Ford globally and in Europe,” Farley said. “The line-up of One Ford SUVs all share the same modern design, smart advanced technologies, and true capability seen in the Edge Concept. These attributes will help to differentiate Ford across the range of our global line-up.” 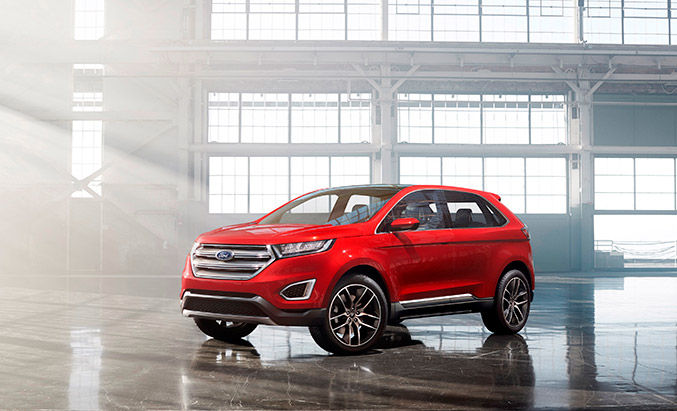 Key attributes of the Ford Edge Concept – a sleek, sporty appearance; capability; fuel efficiency; and technology that assists the driver – are in line with what customers value around the world, which is driving global growth in the SUV segment.

“The all-new Ford Edge Concept gives consumers in Europe a tantalising glimpse of the upscale Ford SUV experience that’s waiting just around the corner,” said Stephen Odell, Ford executive vice president, Europe, Middle East and Africa. “We are seeing strong demand for high quality products that confer status, and give a greater sense of freedom and confidence on the road.”

In Europe, where higher specification Titanium models currently account for 70 per cent of all Ford S‑MAX sales, the Edge will meet demand for upscale, technologically advanced SUVs with great road presence and driving dynamics. SUVs in the region grew from 6.5 per cent to 11.9 per cent of vehicle sales between 2005 and 2012. Ford projects that between 2013 and 2018 sales of all SUVs in Europe will increase by 22 per cent.

Data provided by IHS Automotive indicates global SUV sales grew 45 per cent between 2007 and 2012. The segment now accounts for more than 13 million sales annually – 17 per cent of the global automotive market.

The driver-assist technologies and semi-automated features in Ford Edge Concept hint at a future offering even more intelligent and capable vehicles from Ford. These sensor-based technologies form the building blocks for the future of automated driving, and will help make driving safer and more efficient.

Fully Assisted Parking Aid is a prototype technology that builds on Ford’s Active Park Assist feature to let customers park their vehicles at the touch of a button, or even by remote control. The system can find a perpendicular parking space using ultrasonic sensors and allows customers to wait until the vehicle has pulled out of a tight parking spot before entering.

Ford also has begun a research project designed to refine advanced Obstacle Avoidance systems. The research and development vehicle can issue warnings if it detects slow-moving objects or stationary obstacles in the same lane ahead and – if the driver fails to steer or brake following warnings – the system automatically steers and brakes the vehicle to avoid a collision.

Adaptive steering makes steering at low speeds dramatically easier, and steering in all conditions feel more confident and engaging. The technology, which builds on Ford’s electric power-assisted steering system, controls the relationship between how much the driver turns the wheel and how much the road wheels turn. This means that low-speed steering – such as pulling into or out of a parking space – requires much less effort from the driver.

Developing technology that can help people around the world feel more confident and secure is a high priority for Ford. The Ford Edge Concept features many of the automated driver-assist technologies – the building blocks to fully automated vehicles of the future – that the company offers on its global products today. These include: 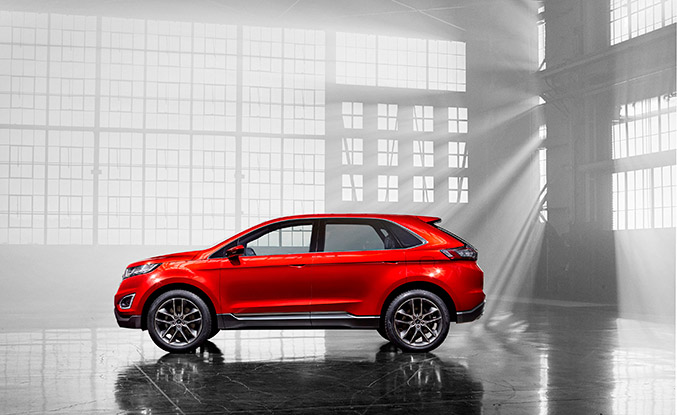 The new Ford Edge Concept exterior is carefully sculpted, fluid and athletic. Strong shoulders add to the feel and appearance of a runner in the starting blocks; the rearward slope of the grille influences the shape of the bonnet, which is both muscular and more compact.

The Edge Concept has a new high-tech application of Active Grille Shutters. To aid the fuel-efficiency of a next-generation EcoBoost engine with start-stop technology, the shutters automatically open and close to maintain ideal engine operating temperature and maximise aerodynamic efficiency. When activated, a panel slips down from above, then two more move into place, appearing as if they radiate from the Ford oval.

LED lighting is used on both the headlamps and taillamps of the Ford Edge Concept. The headlamps light up in complete white, creating an uninterrupted, homogeneous display; individual LEDs light up crystal cubes on high beam.

The turn signal transforms from a chrome-appearing piece into bright amber, lit from behind through microscopic holes in the surround, adding to the laser-thin appearance of the headlamps. The taillamps are executed in a similar fashion, cleverly and stylishly connected to the backlight.

The exterior is painted in new Copper Flame, a modern execution of a premium colour currently popular on Ford cars. 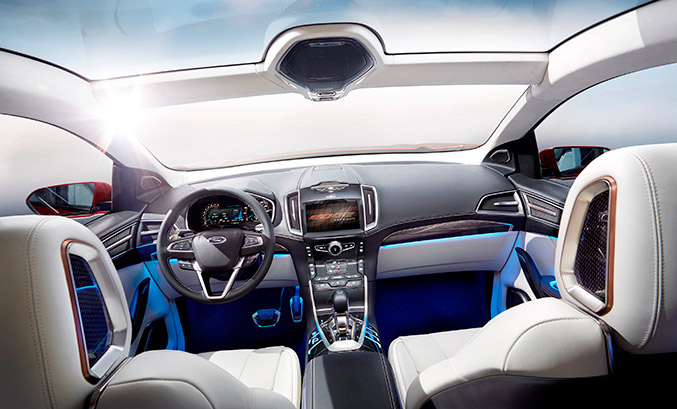 High levels of craftsmanship and rich materials unify the Ford Edge Concept. For example, black Nubuck leather wraps the upper instrument panel, centre console and door elements, enhanced by elegant stitching. The heavy, oiled-grain texture has a feel similar to leather used on high-end furniture; this is juxtaposed with smooth leather on the touchpoints.

“We wanted the interior to be consistent in its dynamic character with the exterior of the Ford Edge Concept,” said Hak Soo Ha, interior design manager. “We call the interior environment Dynamic Sanctuary because it combines the energetic character of the exterior with a more premium cabin execution. The shapes provide a dynamic, in-motion impression that soothes rather than fatigues.”

Copper is used as the accent colour in the carpet, instrument panel and other areas for its premium appearance, complementing the exterior paint colour. The vehicle’s leather seats are executed with a distinct perforation pattern, as well as premium stitching and accent plating in the head restraint and top of the shoulder bolster.

“Ford has promised an upscale, large SUV in the form of the next generation Edge for Europe – complementing the new Kuga and new EcoSport,” Odell said. “The new Edge Concept highlights the potential to deliver a truly technologically advanced model that can meet and exceed expectations in this growing segment.”