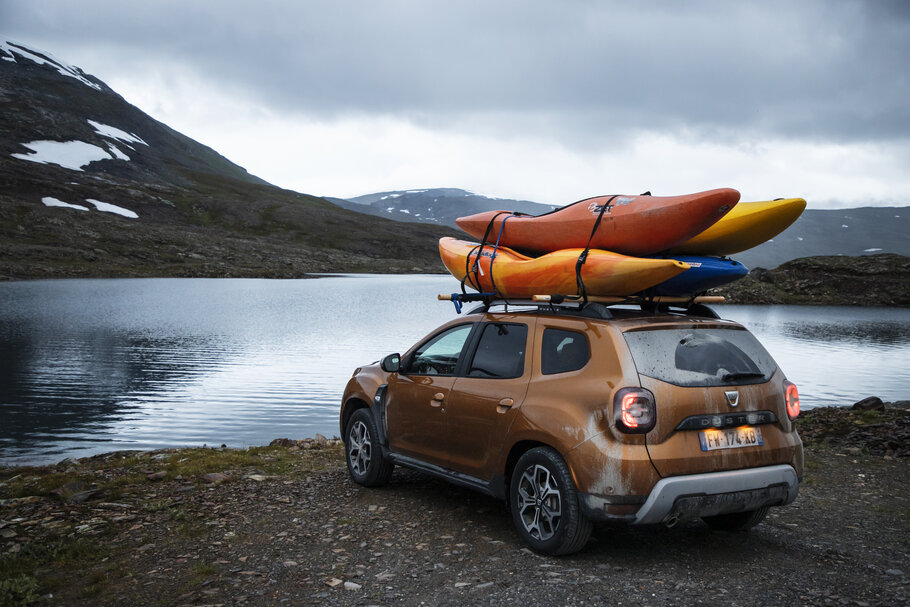 A team of six extreme kayakers have completed an 11-day expedition with help of the Dacia Duster. Venturing through unexplored lands and rivers in the stunning wilderness of Lapland, the fearless group used the Duster to haul their equipment north of the Arctic Circle, cut off from civilisation.

Built for adventure, Dacia’s iconic SUV proved the ideal vehicle for the challenge as the team traversed nearly 5,000 miles to reach the wild waters in the North Cape region of Norway. With kayaks secured on the roof and bivouac tents and equipment stored in the boot, the team were set for an adrenaline-packed expedition after more than a year of living in lockdown. 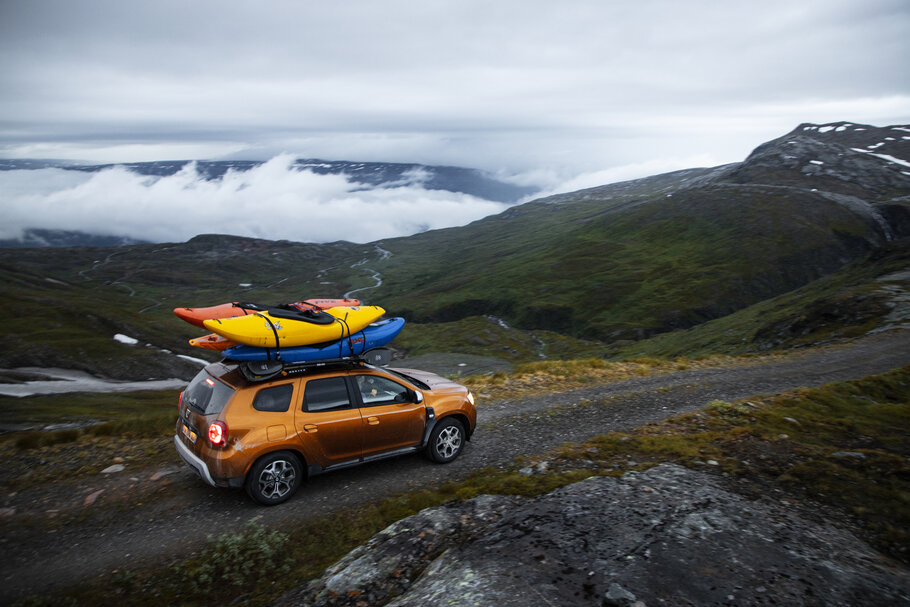 Eric Deguil, four-time extreme kayak world champion and three-time winner of the Green Race – arguably one of the most gruelling races in the world – said: “The journey was long, we clocked up some serious mileage, but that’s the beauty of the Duster and going on an adventure: take a reliable car and some mates and drive off into the unknown.”

The man behind organising the expedition, Julien Turin, is a remarkable kayaker who has spent the past 10 years planning a crossing of the Nordic regions. He is very familiar with the country’s wilderness having taught as a kayak instructor in Sweden for many years. With the help of maps and satellite imagery, Julien came up with the ‘dream expedition’ which he would talk about with athletes he met as he travelled the competition circuits. Along with Eric Deguil, he set up a crew of seasoned kayakers.

Joining the team was triple world champion, Nouria Newman. In 2014, she became the first woman to descend the Grand Canyon of the Stikine, whose rapids are among the dangerous in the world.

The expedition also piqued the curiosity of Guillaume Hasson, a man with life-long experience with navigating rapids, as well in fixing cars and kayaks. “We had to have someone like him on the crew,” his fellow kayakers added.

Further joining the team was Thomas Neime. A heavyweight in today’s world of extreme kayaking, Thomas has taken to rivers around the world, from Pakistan to Canada and South America, in search of his next hit of adrenaline.

The final crew member, Jonas Le Morvan, is well-known for winning the team race known as King of the Alps Extreme in 2017.

The group met up in Grenoble in the southeast of France, where they set off in a Dacia Duster on their road-trip. Rugged and robust, the Duster is built for adventure and met all the requirements of their expedition.

The Duster’s generous boot volume, up to 1,574 litres, meant there was enough room for all the gear they needed. With the boot loaded and kayaks secured on the roof, the six athletes took to the road.

Passing through Switzerland from France, and into Germany before taking a ferry to Sweden, the first leg of the expedition was a stretch of more than 1,800 miles. Having reached Stockholm, the team headed off to Sulitelma, Norway. The road trip north was peppered with nights under the stars, riverside fishing stops, and test runs with the equipment. The crew said: “The first rivers were amazing, but the more you ventured into the wilderness, the more grandiose it became. The expedition really came into its own.”

The crew of athletes prepared themselves to brave the biggest obstacles in unforgiving conditions. The cold, humidity and ever-present mosquitoes were going to test them, but above all, the highest category IV and V rapids and waterfalls were the ultimate test. 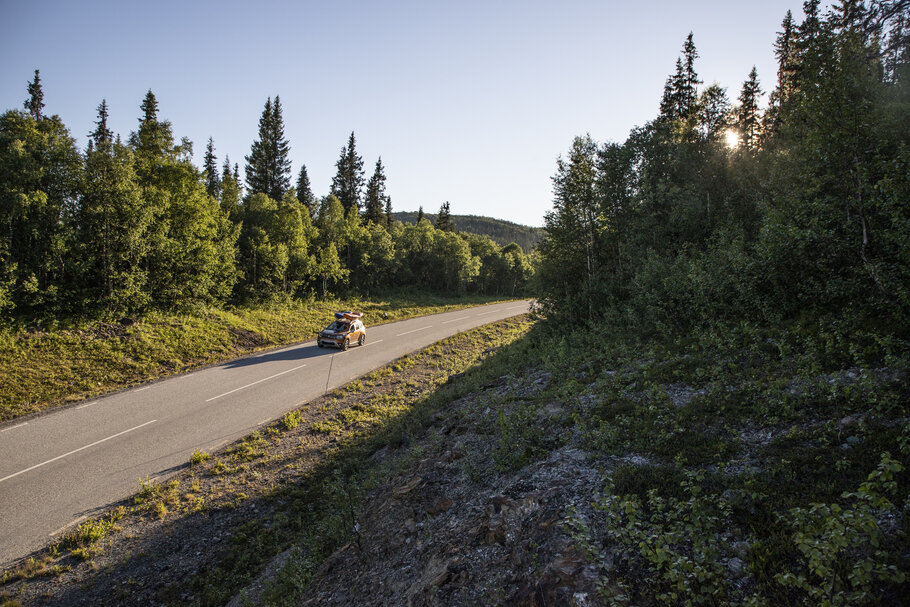 Each carrying 20 kilos of equipment, including their kayaks, the crew ventured into the Lapland wilderness, driven by their thirst for freedom and testing their own limits. From Sulitelma, they headed to Ritsem in Sweden, travelling more than 130 miles by kayak and foot.

The Duster was perfect for dropping off the kayaks in the water and picking them up at the other end. The Duster’s proven off-road capabilities meant that the team were able to uncover and explore idyllic locations to pitch their tents.

Temperatures stayed below the 5°C mark with intermittent snowfall throughout the trip. Out on the turbulent Lake Vastenjaure, the kayaks were set to cover more than 20 miles of 1.5-metre swell against constant headwinds. It was a challenge that elated the athletes.

With its rich network of waterways, numerous national parks, and large areas of untouched wilderness in northern Scandinavia, Lapland is an ideal playground for extreme kayakers looking for an adventure out of the ordinary. “We paddled down every type of river a kayaker could ever hope to encounter,” the team said.

The rapids gave them the rush they were looking for. The last stretch on Lake Ritsem saw a set of rapids flowing at around 300m3 per second for over 100 metres.

The versatility offered by the Duster meant it “delivered on its promise as a comfortable, robust and spacious car,” said Eric Deguil on completing the challenge.

In addition to the fun the team had whilst in the Duster, it was an ideal scouting vehicle that came into its own when moving between kayak points. No matter how dusty, rocky, or steep the path ahead, it was always up to the challenge.

Eric added: “The Duster was the ideal vehicle for this kind of expedition. We covered nearly 5,000 miles and it was at ease as much on motorways in France, Switzerland, and Germany, as it was handling roads through Sweden and Norway, including off-road dirt tracks that are accessible only during summer.”

With the mission accomplished, the Dacia Duster carried the team home with many fond memories.

Having been recently updated with refreshed design elements, advanced features and technology, the New Dacia Duster remains true to its roots by continuing to offer the same versatility and value-for-money it is acclaimed for. With high ground clearance and four-wheel-drive versions offering a 4×4 Monitor, it means the Duster truly is at home on both the road and off the beaten track.