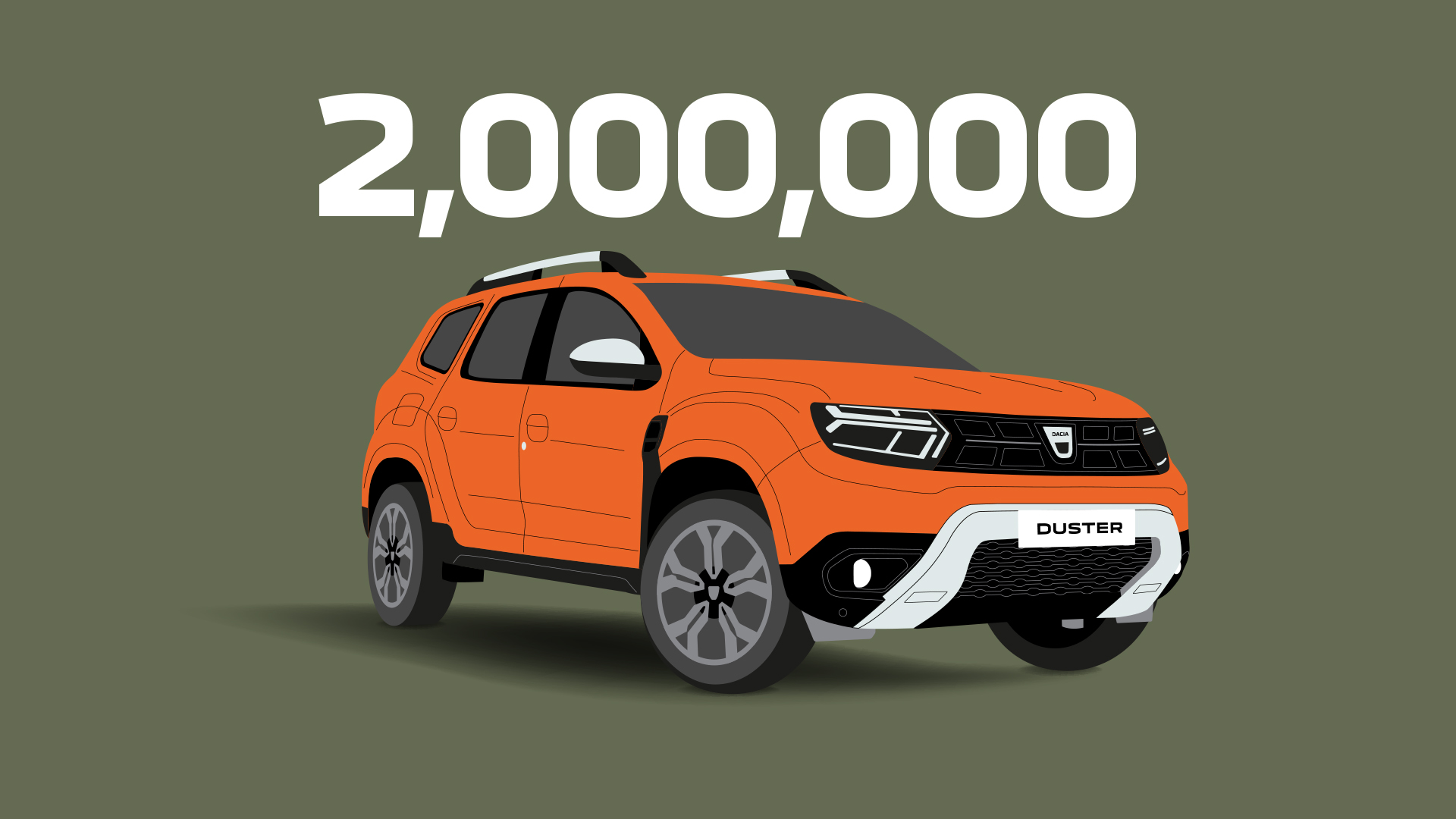 Dacia continues to grow from strength to strength as the ever-popular Dacia Duster hits 2 million units sold in nearly 60 countries.

Launched across Europe in 2010, the Duster has quickly earned a reputation for making SUVs widely popular and accessible around the world. The Duster is aimed both at customers who are looking for a comfortable, attractive SUV and those who want a robust, versatile 4×4.

THE DUSTER DNA
The first-generation Duster was designed from scratch as no vehicle existed like it on the market at the time. The aim was to create a robust, reliable, and versatile vehicle that drove like a 4WD. Not only did the Duster have to be an ideal fit for many different terrains and climates around the world, it also had to deliver unbeatable value that was unrivalled.

Despite the first Duster being a renowned bestseller, the second iteration that came to the market seven years later further built on the success. In 2017, the design brief was clear: keep the original Duster DNA and build on its strengths, while still offering a product that pushed the boundaries. After numerous in-house design competitions and some very exciting sketches, one design quickly stood out from the crowd which offered a more muscular silhouette, a raised beltline with higher quarter windows, and a more assertive grille.

The approach used in the development of Duster by Dacia’s clever designers and engineers is known as Design-to-Cost. It applies a high level of innovation to develop affordable and reliable products that meet customer driven expectations.

David Durand, Head of Exterior Design, explains this approach through the example of the Snorkel, an attachment that houses the indicator light. “We had to come up with the design due to a technical constraint. The wheels are quite offset in relation to the doors, and it is impossible to stamp out parts that fit the required shape. So, we created a plastic “snorkel” that sat between the wings and the doors. It is very functional as it provides ideal protection against flying specks of gravel and mud. We saved money while coming up with a unique design that gives the Duster its rugged look!”

Further examples include the air vents on the second-generation Duster. It is the only Dacia model that boasts three air vents located in the centre of the dashboard. This was a decision that not only adds to the vehicle’s aesthetics but also to the passenger comfort.

In Romania, the Pitesti Plant (Mioveni) was overhauled and retrofitted to ready the factory for Duster production. From then on, the Duster has become a point of national and international pride. It has been adopted by customers, government agencies and companies and the world.

TRAILBLAZING SPIRIT
True to its heritage, the Duster is a family SUV with a trailblazing spirit. At home on both the road and off the beaten track, the Duster has ventured down many paths and negotiated different terrains from Siberian cold tracks to the Moroccan desert.

Over the years, the Duster has taken part in many world-famous events. From the Rallye Aïcha des Gazelles in Morocco, the famous Pikes Peak hill climb in the United States and the Andros Trophy, the Duster has embraced its sporty, robust and adventurous side. In Poland and France, Duster has become a traditional fixture in many competitions as it is regularly seen taking to the podium at the National Rally Championship, the Dacia Duster Motrio Cup and 4WD endurance races.

VERSATILITY
Proving its versatility time and time again, the Duster has also been adapted for many different uses. Highlights have included the addition of caterpillar tracks, a Duster pick-up, a Duster ambulance, a Duster police car and the famous Duster ‘Popemobile’. The Romanian Ministry of Defence has recently ordered 880 Dusters, with the cars carefully being prepared in the Mioveni workshops.

Reaching 2 million Dacia Duster units sold worldwide comes at an exciting time as Dacia has recently enhanced and updated its Duster SUV model. This latest version features refreshed design elements, up-to-date features and technology all while continuing to offer the same robustness, comfort, and value-for-money which it is famed for. The Duster has been the number one car for retail sales in its class in Europe’s SUV market since 2019.