Centenarian Aston Martin Looks to The Future at Frankfurt 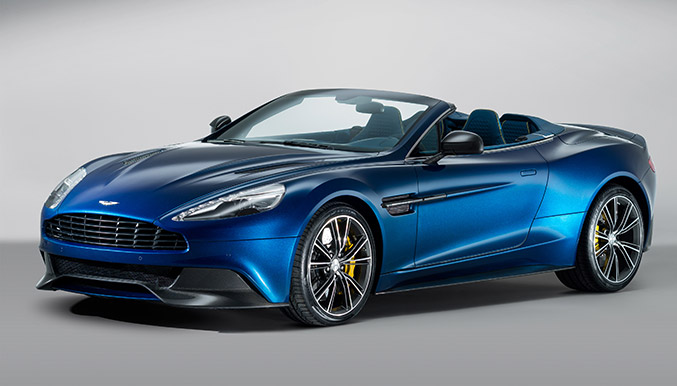 2013 is a global celebration for the luxury British sports car maker – which is marking its centenary – as it reflects on 100 years of iconic sports car manufacture with landmark events across the globe.

And while the centenary festivities continue in Germany with show-goers being offered a glimpse of the rarest of all new Aston Martin models – the CC100 Speedster Concept created to mark the brand’s first century as well as hint at its future design direction – centre stage at the IAA Cars event goes to a brace of the brand’s forthcoming sports cars.

“Centenary events in Dubai, Shanghai, the Far East, Pebble Beach in the US, the UK and right across Western Europe – including the Nürburgring here in Germany – have celebrated the remarkable Aston Martin story so far.

“Now, we are looking to the strong and exciting future of the brand with cars that clearly show our engineering and design capabilities.

“The Vanquish Volante is automotive art and exhilarating GT luxury combined, while the V12 Vantage S shows the sporting heart of the brand beats more powerfully than ever.”

The V12 Vantage S, which arrives in showrooms around the world over the next few weeks, is the brand’s fastest accelerating production car to date – with the exception of the sold-out One-77 hypercar.

Taking just 3.7 seconds to sprint from 0-60 mph (3.9 seconds 0-100 km/h) the sports car underlines its position as not only the brand’s fastest accelerating production car, but also the most potent Vantage in Aston Martin’s 100-year history.

Equipped with the new 573 PS AM28 6.0-litre V12 engine, featuring latest generation engine management from Bosch, the car is capable of reaching 205 mph making it, also, the fastest sports car to wear the iconic Aston Martin wings – One-77 excepted.

With 620 Nm of torque available at 5,750 rpm the V12 Vantage S is as flexible as it is powerful. Low rev torque – measured at just 1,000 rpm – stands at 510 Nm and, driving the rear wheels through the new Sportshift™III AMT (automated manual transmission) ensures the car boasts true sporting driveability.

Race car technology runs right through the DNA of the V12 Vantage S with, for instance, CNC machined combustion chambers and hollow cam shafts just two examples of track technology feeding through to the road.

Another clear example is the new gearbox. The Sportshift™III AMT (automated manual transmission) is a major development of the automated manual gearbox that appears in the current V8 Vantage S.

Meanwhile the debut of three-stage adaptive damping – another ‘first’ for the Vantage family – allows the driver to more precisely tailor the car’s dynamic character. ‘Normal’, ‘Sport’ and ‘Track’ modes provide a broad swathe of dynamic performance that can be tuned to better suit the driver’s requirements. The system also governs the level of power steering assistance offered.

Working alongside the extended adaptive damping system is a ‘Sport’ mode, controlled via a button on the centre console that alters throttle response, gearshift speed and timing, and exhaust note to, once again, tune the character of the car to the driver’s requirements.

A new exhaust system – derived from that of the One-77 hypercar – is lighter, smaller and even more spine-tingling than that of the outgoing car.

The ZF Servotronic power assisted steering is new, too. With a quicker 15:1 ratio it is linked to the adaptive damping button and offers two-mode steering assistance designed to best match the ‘Sport’ or ‘Normal’ settings generated by the Adaptive Damping System.

Dr Bez said: “V12 Vantage S may be our most extreme new sports car, but it is also a tribute to our engineering excellence. To master such formidable power, to make it usable and controllable, these are skills that are not commonly available. The engineering team at Gaydon have executed the installation of our most powerful engine in our smallest sports car with real skill.

“We have created an extreme sports car, for sure; but we have ensured that it stays true to the luxurious ethos of the brand.”

Aston Martin’s other newcomer at Frankfurt is the Vanquish Volante – a stunning new luxury sports car that brings the thrill of open top motoring to the super GT class.

Alongside its coupe sibling the Vanquish Volante sits at the pinnacle of the luxury British car maker’s sports car line-up. It, too, will be arriving in Aston Martin showrooms around the globe over the coming weeks, with customers in the UK and Europe set to receive the first cars before the year’s end.

Benefiting from all of the technical, engineering and design advances present in the Vanquish coupe, the new Volante enhances the driving experience still further.

Vanquish Volante boasts the same new AM11 6.0-litre V12 engine as the coupe and the same blistering performance figures, meaning the 0-60 mph sprint is despatched in just 4.1 seconds (0-62 mph in 4.3 seconds) while the top speed stands at 183 mph.

It is the first fully carbon fibre-skinned Volante in the brand’s 100-year history, while also being the stiffest Volante body structure yet created by the engineering team at Gaydon in Warwickshire, England.

Welcoming the car’s Frankfurt appearance Dr Ulrich Bez said: “This car is what luxury super GT driving is all about. Great performance, fantastic style and exhilarating Volante motoring in one superb package.

“Maintaining the super GT performance for which Vanquish Coupe is renowned, while also ensuring we exceed our previous best in terms of luxury, refinement and driving composure has been the designers’ challenge. With this car, they have excelled at their task.”

The design of Vanquish Volante represents the latest take on Aston Martin’s iconic visual language. Styling cues such as the elegant waist, elongated side strakes and LED rear light blades are derived from the One-77 supercar while the folding fabric roof sits beneath a tonneau and decklid that have been aerodynamically tuned for optimum performance.

The Vanquish Volante’s ‘suit’ of carbon fibre panels cloaks a cabin that is both sophisticated and comfortable. The 2+2 cabin is elegantly attired in authentic and luxurious materials: full grain Luxmil leather with optional quilting, metal controls and satin chrome trim underscore the car’s well-appointed nature.

Each body panel on the car is constructed from carbon fibre not just because of its high strength-to-weight ratio, but also for its flexibility of form.

As practical as it is well-dressed, the Vanquish Volante boasts a boot that’s fully 50% larger than that of the previous DBS Volante. It measures 279 litres – roof up or down – and makes the new Aston Martin the perfect choice for continent-crossing grand tours as well as daily drives.

Perhaps one of the most striking interior design elements is the centre stack with refinements providing a more elegant form that is also more intuitive and accessible for both driver and front seat passenger.

A direct descendent of the One-77 centre stack, the Vanquish and Vanquish Volante’s set-up retains familiar elements such as the ECU engine start button and glass gear selection buttons while featuring a new infotainment system and a significantly more user-friendly design.

Aston Martin Design Director Marek Reichman explained: “Vanquish Volante is a sports car, of course, but more even than that it is the ultimate Volante. A car which follows a long line of elegant Aston Martin convertibles, this super GT is sculpted to convey sophistication as much as raw power.

“The aerodynamically shaped tonneau, the proportions of the folding fabric roof, the luxurious nature of the cabin – these elements have been pored over by the Design team, working with our Engineering colleagues, to ensure we deliver the aesthetic appeal for which Aston Martin is renowned around the world.”

‘Q by Aston Martin’ is a bespoke personalisation service that goes far beyond the options list to offer demanding clients the very broadest choice and, as such, truly bespoke sports cars.

Q allows customers to enhance and personalise their cars with meticulous attention to detail. The service can be extended to interior and exterior styling, offering almost endless opportunity for expression.

In Frankfurt the company is showing a Vanquish Volante that has received unique Q personalisation to demonstrate more powerfully than ever the tailored nature of the service.

Aston Martin Director of Design Marek Reichman said of the car on show in Germany: “The beauty of Q by Aston Martin is the service’s near-infinite flexibility. I believe the Vanquish Volante we are showing in Frankfurt demonstrates better than ever just how flexible we can be as we strive to create bespoke treatments for new cars.”