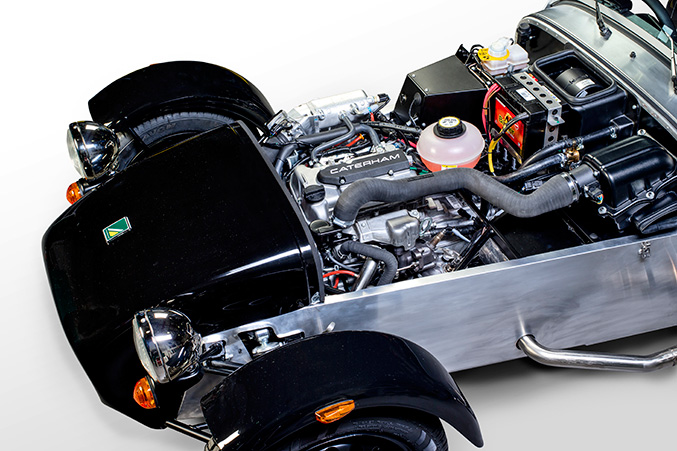 Ahead of the show, the British manufacturer of lightweight sportscars has revealed more details about the variant of the iconic Seven that will provide an accessible new entry point to the current range, with a price tag target of €25,000 including local taxes.

The car will be called the Caterham Seven 165, a reference primarily to the confirmed 80hp produced by the 660cc, three-cylinder, turbocharged Suzuki K6A engine after enhancements made by the Caterham Group’s engineering consultancy, Caterham Technology & Innovation (CTI).

Despite the compact nature of the Suzuki powerplant, CTI has fine-tuned the K6A engine to deliver increased performance including a torque output of 107Nm, balanced against amplified fuel economy and reduced vehicle emissions.

Caterham Cars CEO, Graham Macdonald, said: “The engineering process involved in the creation of the Caterham Seven 165 is nearing completion and, as we piece together the final elements, the car we believe will inspire a new generation of drivers to become Caterham enthusiasts is taking shape in exciting fashion.

“Earlier this year, we launched the fastest, most powerful production Seven we’ve ever launched in Europe – the Seven 485. The 165 will sit at the opposite end of the scale, both in engine size and price, but the beautiful thing is that the two cars will offer exactly the same level of pure driving fun. Whether you’re a seasoned, hardcore driver or whether you’re new to sportscars, there will be a Caterham that suits you.”

Production of the Caterham Seven 165 is expected to begin in January 2014, with first deliveries later that Spring.