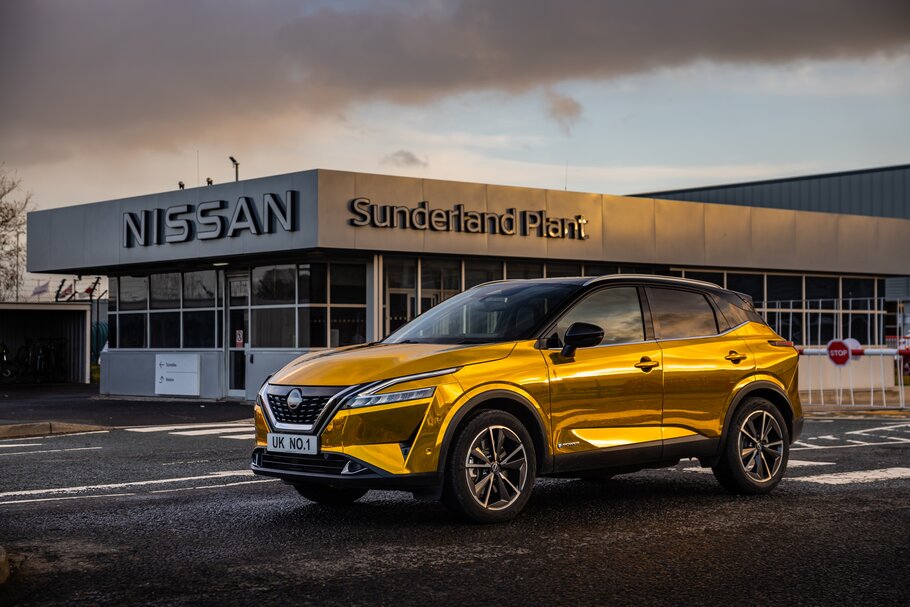 The Nissan Qashqai is officially the UK’s favourite car of 2022, and the first British-built model to top the annual sales charts for 24 years.

Figures released today by the Society of Motor Manufacturers & Traders confirm that the home-grown Qashqai – which was designed in Paddington, engineered in Cranfield and is built in Sunderland – was the nation’s best-selling car of the last 12 months.

A total of 42,704 new Qashqais were driven off dealership forecourts across the UK in 2022 and the figure for December alone stood at an impressive 3,506, reported the SMMT.

To celebrate the achievement, an exclusive gold-wrapped Qashqai was created in honour of the 7,000 Nissan employees from around the UK that have contributed to its success.

Andrew Humberstone, managing director of Nissan Motor (GB) Ltd, said: ‘‘This is a landmark moment for a landmark car and it’s great to see how the latest generation Qashqai has struck a chord with car buyers here in the UK.

“We’re absolutely thrilled to see this car’s increasing success over the last 16 years, and it’s a fitting tribute to the skills and talents of Nissan’s excellent design, engineering, production and sales teams all around the UK.”

Three generations of Qashqai have been on sale in the UK since it was first launched in 2007, all of which have regularly appeared among individual month’s best-seller lists, however this is the first time it’s been the year’s best-selling car overall, and the first time a Nissan has topped the annual sales charts.

Built at Nissan’s Sunderland plant, Qashqai is at the heart of a manufacturing operation that is fast becoming a blueprint for future UK automotive production.  Nissan’s recently announced EV36Zero plan combines electric vehicles, renewable energy and battery production and will create a sustainable EV manufacturing hub in the north-east of England, supporting thousands of jobs at the plant and its supply chain, and supporting Nissan’s journey to carbon neutrality by 2050.

A recruitment drive* is currently underway at NMUK, seeking manufacturing staff to join its world-class team.

The latest generation Qashqai is the first model in Europe to be equipped with Nissan’s unique e-POWER technology, which delivers the exciting sensation of driving an electric car without the need to plug in and recharge. It’s unique technology that’s perfect for car buyers looking for lower emission motoring, but who aren’t quite ready to embrace fully electric vehicles.

Design:
Mat Weaver, Vice President of Design, at Nissan’s design centre in Paddington, London, said: “With its compact footprint and higher driving position, the first generation Qashqai broke the mould for how a mass-market vehicle should look and feel – it was a revolutionary ‘crossover’ design.

“‘It’s difficult to believe now that some industry observers were sceptical about Qashqai’s chances of success when it first arrived back in 2007. Yet, in 2023, crossovers are now the dominant car design trend with almost all manufacturers now featuring them in their line-up.

“It all started with our ground-breaking Qashqai – a British success story that’s assured of a place in the automotive history books.’’

Engineering:
David Moss, Senior Vice President of Research & Development at Nissan Technical Centre in Cranfield, said: “The Qashqai has always had an incredibly challenging brief. To become a best-selling car, it has to excel in all areas from performance, practicality, reliability, design and technology. It also has to be great value for money, and have a distinct character that makes people proud to own and drive it.

“Our engineering teams in the UK have worked incredibly hard to develop the Qashqai to ensure it exceeds this brief and our reward is seeing it earn its place as a motoring icon at the heart of British life.”

Manufacturing:
Alan Johnson, Vice President of Manufacturing for Nissan Motor Manufacturing (UK), added: “We’ve built three generations of the ground-breaking Qashqai in the north-east and it has become the mainstay of production here for 16 years.

“We’re incredibly proud of its success and it’s great to see that our passion for building it is shared by car buyers across the UK and Europe, who love its combination of practicality, exciting design, unique technology and electrified efficiency.”

Nissan in the UK:

Nissan Technical Centre Europe, Cranfield, Bedforshire
Nissan Technical Centre Europe (NTCE) is one of Nissan’s regional R&D centres of excellence, providing support to R&D’s global headquarters in Japan, alongside other similar facilities in America and China. Founded in 1988, NTCE has contributed to the development of key products and technologies for the European market, and beyond. NTCE is headquartered in Cranfield UK, with other R&D sites located across Europe.

NTCE in Cranfield is also home to two of the region’s other important functions, Total Customer Satisfaction (TCS) and Purchasing. The site comprises approximately 720 employees across R&D, TCS and Purchasing as well as other indirect functions on site.