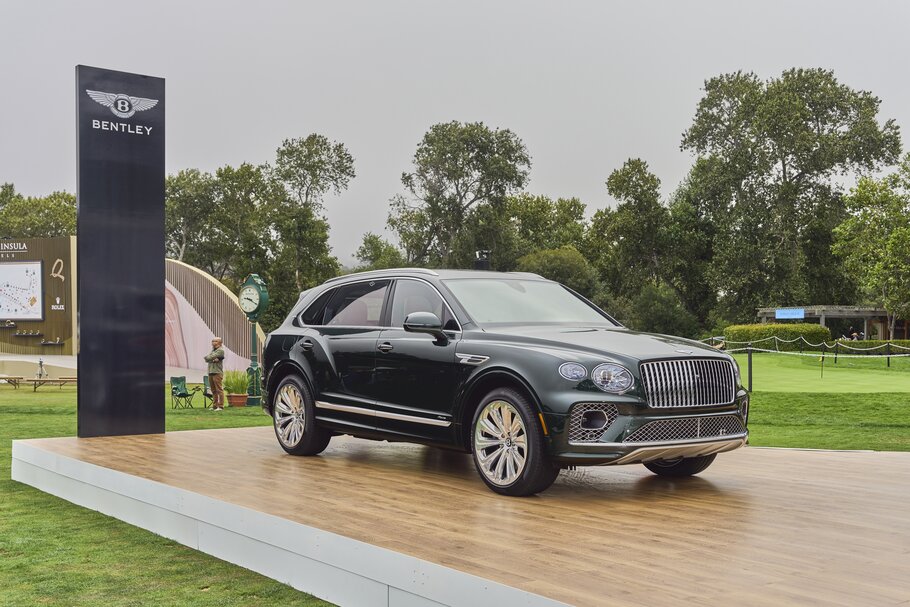 The Bentayga EWB Mulliner Gallery, a special one-off car that’s become a driveable installation of exquisite hand-crafted art, has made a stunning public debut in the USA.

Originally created by the Mulliner Design team, the individual artworks have been reproduced on beautiful wood veneer by British airbrush artisan Piers Dowell and his protégé Lewis Warby. Four different but equally special projects have been featured:

Chief Technical Officer for Mulliner & Motorsport, Paul Williams, comments:
“The Bentayga EWB Mulliner Gallery is a celebration of so many different things. With Bentayga EWB nearing start of production, seeing the car in public is a real reward for the engineering and manufacturing colleagues that have worked so hard on the project. The car also marks Mulliner’s growth and recent successes, through the extraordinary transformation of the wood veneer into these stunning explosions of colour showing some of our recent projects. Finally, it’s a testament to the skills of our Mulliner Design team in creating the original artworks, and the immense talent of Piers Dowell in airbrushing them into reality.”

Built into one of the last pre-production Bentayga EWBs as the car nears its formal Start of Production, the artworks sit in a four-seat cabin of Portland and Cumbrian Green leather, with contrast stitching and emblems. The rear cabin features a pair of the most advanced automotive seats in the world, via the Airline Seat Specification. The interior colour palette is reflected to the exterior, with Cumbrian Green mirror-finish paintwork paired with 22” polished wheels and bright chromework.

Four Extraordinary Projects
The six pieces of veneer – four door waistrails and two front fascias – together form a ring of wood around the cabin, with each door featuring a different Mulliner project.

Starting at the driver’s side rear passenger door, the waistrail depicts the Blower Continuation Series – the run of 12 new, hand-built Bentley Blowers, mechanically authentic to the original 1929 Team Car No. 2 raced by Sir Henry ‘Tim’ Birkin. Forming the world’s first pre-war continuation series, the 12 cars are all either in build or have already been delivered to their lucky owners. The Blower Continuation Series will be followed by the recently announced Speed Six Continuation Series, a matching run of 12 cars that will recreate the specification of the Speed Sixes that won Le Mans in 1929 and 1930.

Moving forward to the driver’s door, the stunning Bentley Mulliner Bacalar is recreated in its original yellow launch specification. The Bacalar marked the return of Mulliner to genuine coachbuilding, with the hand-production of 12 Barchetta-design cars, each individually co-created by their customer in conjunction with Mulliner Design. Offering virtually limitless opportunities for personalisation, the Bacalar proved an instant success – with all cars reserved before the project was announced. Eight cars have been delivered, and the final four are in the final finishing stages of handcraftsmanship in Mulliner’s Crewe workshop.

The Bacalar artwork flows from the waistrail into the driver’s fascia. On the opposing side of the cabin, the artwork for the front passenger door also starts in the passenger fascia and blends across the door gap. The featured car for this veneer is the Flying Spur Mulliner – the pinnacle car in the Flying Spur family. Launched at Monterey Car Week last year, the Flying Spur Mulliner is Bentley’s ultimate luxury sedan, and showcases what can be achieved when Bentley engineering and design meets Mulliner craftsmanship. The car is available with a choice of powertrains – Bentley’s 4.0 litre V8, the iconic 6.0 litre W12 or as a Hybrid, with a 2.9 litre V6 paired with a 100 kW electric motor.

Finally, the rear passenger-side door shows the one-of-one 1939 Bentley MkV Corniche – a formerly long-lost car that provides a crucial link in the design history of Bentley’s most important models. Mulliner completed a ground-up rebuild of the only MkV Corniche ever made, which was originally destroyed in the Second World War. The projected highlighted the marque’s pedigree of design and technological innovation and the breadth of skills within Mulliner. The reborn car connects the fabled Embiricos 4¼ Litre and the famous 1952 R Type Continental.

Airbrush Artist Piers Dowell
Piers Dowell is one of the most technically accomplished airbrush artists in the world. Working from his studio in Tenbury Wells, Worcestershire – just 60 miles from Bentley’s home in Crewe, Cheshire – Piers creates artworks of incredible detail and vibrant colour using murals, guitars, racing helmets and any number of other non-porous 3D objects as his substrate. His mastery of airbrushed colour and expertise in working with the fine wood of guitars made him the perfect artist for this project, swapping out musical instruments for Bentley veneer, cut and shaped by hand in Bentley’s dedicated Wood Shop.

Piers has been honing his skills for the past 31 years, and  is now producing work not only unique in its concept but also technically achievable by only a handful of people in the world. That mastery makes his heavily themed artworks desirable as fine art in themselves.

The new model builds on the latest second-generation Bentayga, extending the wheelbase and rear cabin space by an extra 180 mm. Bentley’s design team have ensured the lines and proportions continue to exude style and presence, with the increased length all in the rear door, creating an exceptionally luxurious rear cabin area. With a larger cabin space than any other luxury competitor, an emphasis on wellness, and the introduction of the world’s first auto climate and advanced postural adjustment rear seat, extraordinary journeys are guaranteed.

The new Bentley Airline Seat specification is the most advanced seat ever fitted to a car, with 22-ways of adjustment and world-firsts in a new auto climate sensing system and postural adjustment technology. The rear cabin of the Bentayga EWB sets a new benchmark for combining world-class luxury and technological innovation, demonstrating new heights of craftsmanship and comfort.

The Bentayga has won critical acclaim for its dynamic abilities, with its performance on the road and its ride and handling universally praised. The Bentayga EWB continues this ethos with the inclusion of Electronic All Wheel Steering and Bentley Dynamic Ride as standard. The Bentayga EWB is powered by Bentley’s proven 4.0-litre, V8 petrol engine, which combines immense power with impressive fuel economy.