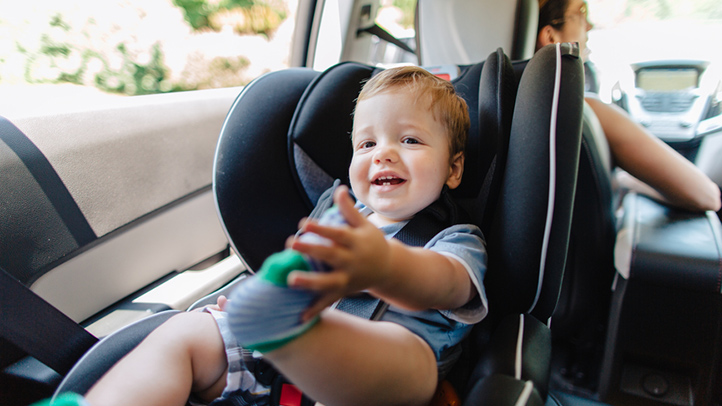 In the early days of the car, there was little thought given to safety. After all, these were machines designed really for one purpose: transportation. It wasn’t until vehicle speeds increased that the general public and car companies themselves, realized just how dangerous these things could actually be.

One of the first safety features

Besides the headlight and brakes, the first real safety feature on automobiles was the electric starter.  No, that’s not a typo – the electric starter. In order to see why, you need to know how cars were started back in the early days. Back in the early 1900s, all automobile engines were started by hand cranking. Not only did this require a great deal of strength, if the engine backfired (which was very common) the crank would swing at you and break bones. People actually died from cranks hitting them in the head as they leaned over. In 1914, a Cadillac engineer by the name Charlie Kettering developed the first automatic starter because a friend of his was maimed by a cranking accident. This device was a godsend. It allowed anyone to start a car while seated safely in the car. It sounds simple today, but the electric starter remains one of the most important innovations ever.

The next few decades

For the next few decades, automobiles evolved along in virtually all ways with the exception of safety features. The problem was that “safety” was driven by marketing departments. If a safety feature was developed and it sold more cars, then it was produced by the car companies. Thompson Toyota of Edgewood, MD, a local Toyota dealer explains that this was before the National Transportation Safety Board was created and federal regulations required manufacturers to meet certain standards.

Then there was Tucker

In the early 1940s, WWII halted the production of automobiles. When it was over in 1945, a once-in-a-lifetime opportunity opened up for automotive entrepreneurs. Most of America and several million returning GIs all wanted to purchase new cars. Preston Tucker, who had worked for several Detroit automotive manufacturers before the war, decided this was the time to realize his dream and make his own car.

Tucker’s car, the Tucker Model 48, featured a cabin designed with safety in mind. It had a padded dash that was free of any spear-like protrusions. It had a center headlight that turned with the front wheels, a rear mounted engine and many other innovative ideas. It was a great start to a “safety-mobile” but unfortunately he overextended himself financially and his company went out of business before many cars could be built.

Then as the folks at explained, in the 1960s Ralph Nadar came along. Nader was a lawyer who focused on issues that affected common citizens. He was very concerned about Detroit and its lack of concern for car safety.  After much research he published a vicious denunciation of the automotive industry.  His book Unsafe At Any Speed was an indictment of the car industry. Some say that Nader’s work resulted in Congress developing the National Highway Transportation Safety Administration (NHTSA).

Driven by the federal government and a acute awareness of automotive safety, safety engineering is a now a major issue for all manufacturers. While some will fuss about ever advancing regulations involved, it’s important to keep in mind that the survivability of accidents has increased many fold since the early days.  In the future, we will undoubtedly see further innovation and improved safety features that will benefit everyone.