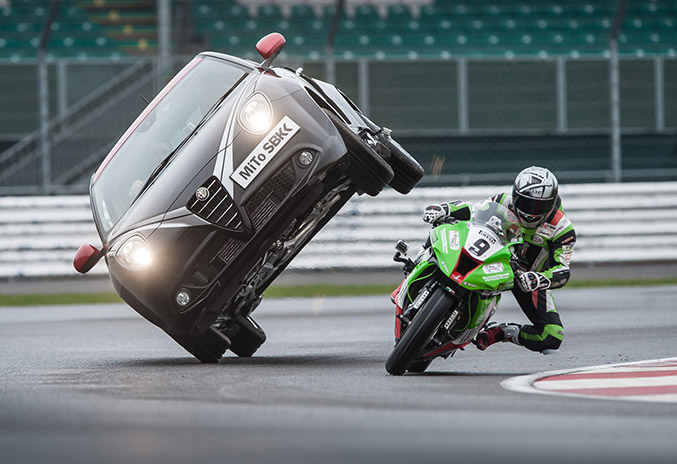 Alfa Romeo has just launched a Limited Edition of the Alfa MiTo, the Quadrifoglio Verde SBK, a product of a multi-year collaboration with the FIM World Superbike Championship. Currently only 28 examples are destined for UK shores.

To mark the model’s arrival in the UK, Alfa Romeo coordinated a thrilling, world first driving dare involving precision driver Paul Swift and British Superbike rider Chris ‘The Stalker’ Walker. Four wheels met two at Silverstone circuit in a challenging manoeuvre with Chris on a Kawasaki ZX-10R Ninja British Superbike ‘undertaking’ Paul in the Alfa MiTo SBK with the car up on two wheels. As Paul took the Alfa MiTo SBK around the sweeping Brooklands corner, Chris throttled in on the inside line, building up enough speed to get the bike over and, for a brief moment, go under the chassis of the Alfa MiTo SBK before speeding out the other side to safety.

First revealed at the Paris Motor Show in 2012, the Alfa MiTo Quadrifoglio Verde SBK Limited Edition combines Alfa’s passion for style and elegance with the excitement and competitive edge of the FIM Superbike World Championship – for which Alfa Romeo is sponsor and safety car provider – to create a truly unique edition in the closest ever activation of the long-running partnership.

The limited edition is available in Solid Black with an Alfa Red roof.

Alfa Romeo enters its seventh year as a top WSBK sponsor in 2013, providing the official safety car to the championship.

How Does Women’s Car Insurance Differ?