Abarth 500: Rebirth of as legend

ABARTH 500: REBIRTH OF A LEGEND 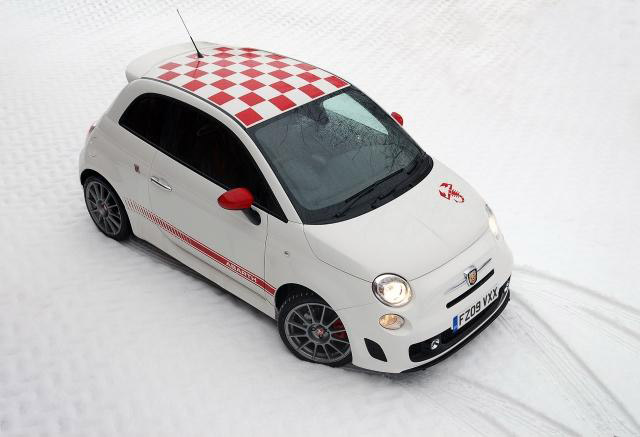 ABARTH 500: REBIRTH OF A LEGEND

By thoroughly re-engineering the highly acclaimed and universally popular city car from the ground up, Abarth has produced a machine purpose-built for the modern driving enthusiast. Not only does it look the part, thanks to bodywork that’s longer and lower than a regular 500, it’s also entertaining to own and drive while maintaining class-leading economy, low emissions and low running costs.

Already a winner of BBC Top Gear magazine’s prestigious Hot Hatch of the Year award, the Abarth 500 has been designed as the credible option for drivers seeking to express themselves through their choice of car.

As a faithful modern incarnation of the tuning firm’s ‘small but wicked’ mantra of the 1950s, this latest 500 also follows the traditional Abarth ethos of using racing experience to make rewarding, high performance road cars at an affordable price. Sales to customers then fuel the racing activities which lead to further road-car developments in what amounts to a ‘virtuous circle’. The most tangible result of this phenomenon is the high-performing 190bhp Assetto Corse version which competes in the one-make Abarth 500 Trofeo Europa.

As befits a car with its roots firmly ensconced in motorsport, all versions of the new small Abarth feature a zesty 1.4-litre turbocharged engine, which has been designed to be responsive throughout its entire rev range as well as being economical and gentle on the environment.

Squeezing a turbocharger into the tight confines of the 500’s engine bay was no mean feat, and led Abarth engineers to completely redesign the front end of the vehicle. As a testament to their skill, Abarth technicians created a deeper spoiler that feeds the engine with sufficient air while maintaining the frontal appearance of the 500.

This isn’t the only alteration to its looks compared with the regular 500 which includes adding sporty side skirts, a much larger roof spoiler, and a deep aerodynamic diffuser at the rear. These addenda are the result of hours spent in the wind tunnel and help improve the car’s stability at speed. With vents to draw hot air away from the brakes, twin tail pipes mounted at either edge of the diffuser and small scorpion logos printed just above them, the Abarth 500 is designed to leave a lasting impression on people looking at it from any angle.

But this is much more than simply a bodywork makeover. The Abarth 500’s performance is similarly and dramatically uprated, with a 128mph top speed and a 0-62mph time of 7.9 seconds. To ensure it’s as much fun to drive as it looks, the suspension has been comprehensively re-designed and the car is equipped with Torque Transfer Control to improve its poise through corners even more.

This helps make the newcomer a reassuringly safe car. Based around a Euro NCAP five-star winner, it comes with seven airbags and a host of electronic safety systems to minimise the effects of the unexpected.

The esseesse version allows drivers to further upgrade their car’s performance courtesy of a retro-fit kit. This boosts engine power to 160bhp using a re-mapped ECU (Electronic Control Unit) and new air filter, as well as adding uprated brakes and springs along with unique 17-inch wheels.

In both regular and esseesse guise, the Abarth 500 interior has an uncompromisingly sporty feel. The one-piece leather-covered sports seats hug the driver and front passenger, and the thick-rimmed flat-bottomed steering wheel looks and feels as though it’s been lifted from a sports car costing twice the price. There’s a dash-mounted turbo boost gauge and gear shift indicator to help drivers get the most out of the Abarth 500’s performance when the Sport button is pressed, and aid economy when it isn’t.

It typifies a machine designed to empower owners to express their passion for driving, without sacrificing any environmental responsibilities.

ENGINEERED BY CRAFTSMEN – AIMED AT ENTHUSIASTS

The Abarth 500 has been designed to put a premium on driving satisfaction. Entirely new springs and dampers are fitted to the front MacPherson strut and rear torsion beam suspension, while the car is also equipped with Torque Transfer Control. This advanced electronic system replicates the effects of a limited slip differential on the driven front wheels to ensure maximum entertainment and safety during cornering.

In addition to having its road manners honed for predictable, agile and responsive handling, the Abarth 500 has had its safety systems engineered to meet the highest standards. A robust braking system features ABS anti-lock braking with EBD (Electronic Brake Distribution) and HBA (Hydraulic Brake Assistance) to ensure maximum stopping power when required. There’s also an ESP (Electronic Stability Program) to ensure control is maintained at all times, while Hill Holder makes for stress-free starts on a slope.

As well as the all-important mechanical alterations, drivers and passengers benefit from the high quality sporting environment. Figure-hugging one-piece sports seats are designed to hold driver and front passenger firmly in place, and feature shoulder slots to accommodate racing harnesses. The black leather-clad steering wheel has a thick rim that gives it a chunky feel, with moulded grips for thumbs and a racing car-style flat bottom. And there’s a new gear lever, again finished in black leather, and designed to nestle sportily in the palm. The look is finished off with privacy glass at the rear and black headlining that’s unique to this model.

UNCOMPROMISINGLY SPORTY – WITH A CONSCIENCE

The results are a top speed of 128mph while the 0-62mph dash is covered in 7.9 seconds. This is achieved thanks to the dash-mounted Sport button which alters the engine’s power and torque characteristics for sportier responses, while increasing load through the electric power steering for a firmer steering feel and added poise in corners.

The feeling of sportiness is reinforced by the sharp-shifting five-speed gearbox and suspension designed to ensure the driver always feels in close contact with the road.

Yet none of this is achieved at the expense of the environment. The Abarth 500 conforms to strict Euro 5 exhaust emissions legislation, well in advance of it being enforced. And its emissions and fuel consumption – 155g/km of CO2 and 43.4mpg in the official combined cycle – make it a top class performer.

Extracting maximum performance or economy is helped by the gearshift indicator housed within the dash-mounted turbo boost gauge. Push the Sport button, and just like in a racing car, the indicator flashes to tell the driver to change up when engine RPM reaches the 6000rpm red line. With the Sport button disengaged, it reverts to fuel-saving mode, advising the driver to change gear at the point in the rev range where maximum economy can be achieved.

Blue&Me MAP is the ultimate all-round driving aid. This portable navigation device is in keeping with Abarth’s sporting heritage and tradition.

Unique in a car of the Abarth 500’s compact dimensions, Blue&Me MAP allows drivers with motorsport aspirations to monitor and analyse their skills behind the wheel. Employing know-how acquired from electronics expert Magneti Marelli’s exploits in motor racing, a real-time telemetry screen displays the engine’s RPM, gear selected, and vehicle speed. Should the driver take his car on a lap of a motor racing circuit, such as Brands Hatch or the Nürburgring for example, and if he or she is using one of the motor racing circuits pre-loaded on an SD card, satellite tracking will show the exact position of the car on the race circuit, and its lap time. On a race track that isn’t on the database, a slow lap with the ‘circuit acquisition’ feature in operation will record all relevant details.

Afterwards, all the information from a track session can be accessed and analysed to enable drivers to improve their performance. Sessions can also be downloaded for comparison with friends, colleagues and other Abarth 500 owners.

But Blue&Me MAP is much more than simply a tool for sporting drivers. Using Bluetooth connectivity, it enables drivers to interact with the in-car audio system and control the satellite navigation safely and without taking their hands off the steering wheel. Navigation instructions appear in the main instrument cluster for enhanced safety. And because this navigation device is portable, drivers can take it with them to use as a map on the move.

Owners who want to take their Abarth 500 even closer to the tuning firm’s ‘racer for the road’ ideal, can plump for the esseesse specification. The word esseesse means ‘SS’ in Italian and lives up to its name by giving the car a supremely sporting twist.

The £2500 conversion has to be carried out within 12 months or 20,000km of the car’s first registration and can only be undertaken by Abarth’s skilled network of technicians. Their first job is to upgrade the engine’s Electronic Control Unit so that the 1.4-litre turbo pumps out 160bhp at 5750rpm – more than double the power output of the regular Fiat model and very much in keeping with historic Abarth practice. To help with this power upgrade, a new air filter made by Italian specialist BMC is fitted.

To match the additional power, drilled and ventilated 284mm x 22mm brake discs are fitted at the front, together with new pads, while 240mm x 11mm drilled discs replace the already powerful standard items at the rear. Uprated Abarth springs are fitted front and rear too, and so that the esseesse looks even racier, the regular 16-inch wheels are replaced with 17-inch white or titanium colour alloy rims and 205/40 R17 tyres.

A tyre pressure monitoring system and unique key cover are the final touches in this transformation to the ultimate road-going Abarth 500.

Even though this upgrade relies heavily on modern technology, the esseesse kit stays loyal to the legend of Abarth by being delivered to customers in a high quality wooden crate. Once its contents have been emptied, the crate then becomes the property of the customer as a charming memento.

COMPETITION IN THE BLOOD

Abarth has built its rich heritage on making automotive sporting excellence available to everyone. Based on the principles of employing cutting edge materials, innovative design and an unyielding attention to detail, Austrian Karl (renamed Carlo when he changed his nationality to Italian) Abarth founded his business 60 years ago.

By tuning and thus extracting the maximum performance from a series of Fiats, Abarth notched up a string of endurance and speed records during the mid-1950s. But it was his tuning of the original 500, just over half-a-century ago, which acted as a catalyst, taking the company to 10,000 track victories, 10 world records and cementing the Abarth name in the public consciousness.

Born 101 years ago, Carlo Abarth presided over the running of his company until his death in 1979. Despite his demise, the business continued, winning its third World Rally Championship in 1980. Now a wholly owned subsidiary of Fiat Group, Abarth has inherited all the competition activities of the Fiat Racing Team.

Competition has always been one of the building blocks for Abarth’s success. And it’s no less important now than when Carlo Abarth established his company in 1949. While the Abarth Grande Punto S2000 has recorded remarkable championship- winning success on Europe’s rally stages, 2009 marks the firm’s return to Europe’s race circuits.

The Abarth 500 Trofeo Europa will involve a field of 190bhp Abarth 500 Assetto Corse models running as support to the all-action World Touring Car Championship. They will compete around some of the world’s most famous circuits, including Brands Hatch in Kent and Italy’s Monza.

Abarth’s sporting activities aren’t just limited to the professionals. The newly formed Abarth Driving School offers young drivers the chance to learn how to get the most out of high performance cars in complete safety.