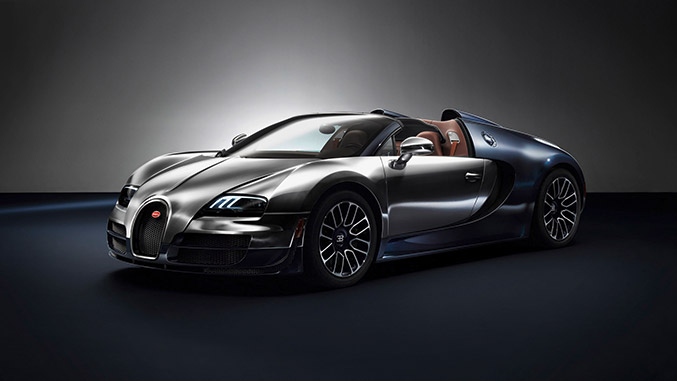 As part of the 2014 Monterey Car Week, Bugatti is celebrating the conclusion of its “Les Légendes de Bugatti” edition (Bugatti Legends). In 2013, Bugatti launched the exclusive model series during the Monterey Car Week at the well-known and attended automotive events “The Quail: A Motorsports Gathering” and “Pebble Beach Concours d’Elegance” with the first Legend. In 2014, the crowning conclusion will be held at the same location with the world première of the company’s sixth Legend. It honors Ettore Bugatti, founder and patron of the brand, and is based on the historical model Type 41 Royale. As with the five previous Legends, only three of the final Legends model will be produced. It costs €2.35 million net. Bugatti is presenting all six Bugatti Legends together for the first and only time.

“Ettore Bugatti is our ‘patron’. His demand that an automobile be a perfect harmony of technology and aesthetics still applies to us today,” said Wolfgang Dürheimer, President of Bugatti Automobiles S.A.S. “Ettore Bugatti always strived for the creation of a total work of art. His ideas and vehicles set the foundation stone for an automobile brand that was lauded then and now as the most valuable in the world. Ettore Bugatti himself is a legend. It was clear from the start that we should dedicate the final Legends model to him personally.”

Ettore Bugatti is one of the most important figures of the automotive world in the 20th century. He knew how to combine his family’s rich artistic heritage with his technological ideas and succeeded in creating the foundation for a design language that shaped the brand for years to come and made it unmistakable. The brand’s values of “Art, Forme, Technique” define this unique approach. Under his leadership, vehicles were produced that were ahead of their times both technically and stylistically, and are today highly valued collectors’ items. Two such vehicles are the Type 57 SC Atlantic and the unforgettable Type 41 Royale that Ettore Bugatti built as the most powerful and luxurious car of its time. It also serves as the historical basis for this Bugatti Legend. The lightweight construction designs of the 1920s, such as the Type 13 “Brescia” or the Type 35 – which was one of the most successful racing cars in motor sport history with 2,000 victories and podium finishes – are further notable representatives of the brand.

“The legend’s design is dedicated to Ettore Bugatti’s passion for the unusual in automobile construction. One of his masterpieces – the Type 41 Royale – never fails to impress and inspire with its mere presence,” explains Achim Anscheidt, Chief Designer at Bugatti. “Ettore liked to describe his creations as ‘Pur Sang’, as thoroughbreds. In dedicating this Bugatti Legend to him, we are staying true to his philosophy of aesthetically functional beauty for the automobile by using pure and natural materials such as polished aluminium and the finest cordovan leather.”

A body of clear-coated carbon and hand-polished aluminium

Exterior. The design of the carbon body of the Legends model “Ettore Bugatti” is based on a 1932 Type 41 Royale with the chassis number 41111 and sports a “yin-yang” color split. The front part is made of hand-polished aluminium and finished with a clear coating. Bugatti is the only manufacturer to use clear-coated aluminium on a production vehicle. For the first time, this material is used for the entire front and side panels including the bonnet, the mirror bases and housings, the exterior door handles and the corners of the bumpers, the wings, the doors and the regions just behind them, the so-called “medallions” (in French). The vehicle’s rear, sill panels and A-pillar trims are finished with dark-blue exposed carbon.

Based on one of the most famous wheel rim designs in automotive history, the polished, diamond-cut wheel rims were specially developed for this vehicle and color-coordinated with a dark-blue finish. The eight-spoke wheel was created by Ettore Bugatti who was looking for a light wheel for his racing cars, like the famous Type 35. Ettore Bugatti thus made a decisive contribution to the development of the aluminium wheel in automobile manufacture. The new wheel rim design on the Vitesse Legend therefore carries the name “Ettore Bugatti.”

The distinctive Bugatti horseshoe and the EB logo at the rear shine out in platinum and underscore the gleaming exterior appearance of this Bugatti Legend.

The signature of the company’s founder Ettore Bugatti is engraved into the tank and oil cap and painted in silver.

Interior. Bugatti is using two types of leather for the first time in the “Ettore Bugatti” Legend. Traditional calf’s leather – here in a natural brown (Brun Cavalier) – is used throughout the vehicle interior. Those parts that are typically touched by hand including the steering wheel rim, gear lever, door handles, centre console armrest and door handle recesses, the switches in the door trims and in the roof module are all jacketed in an exclusive, natural cordovan leather. Bugatti is using this skilfully created leather – the tanning process alone takes around six months – for the first time. It is typically used for high-quality shoes and is particularly durable and sure to the touch.

The exterior’s blue exposed carbon is present again in the vehicle interior, such as in the door trims and cover of the rear centre box, perfectly complemented by the seats’ dark-blue seams. The eye-catching feature of the interior is the platinum-coated dancing elephant, that is inset in the cover of the rear centre box and reminiscent of the hood ornament of the Type 41 Royale. The figure was originally sculpted by Ettore’s brother, Rembrandt. 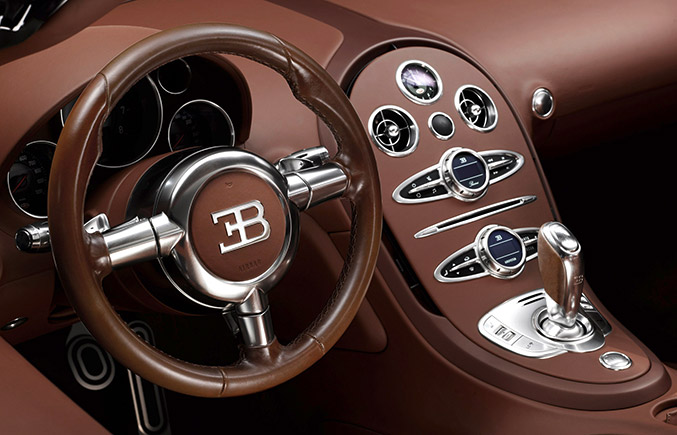 Other well-known Legends features have also been included in this vehicle, namely the “Brun Cavalier” leather-clad insert in the centre console extension which bears the “Les Légendes de Bugatti” nameplate and the relief of the dancing elephant as well as the door sills bearing the portrait and signature of Ettore Bugatti.

Ettore Arco Isidoro Bugatti – his full name – was born in Milan on 15 September 1881, the second child of this highly creative family. His parents hoped that he would pursue an artistic career like his father and grandfather before him. But instead he became fascinated with technology, leaving the “Accademia die Belle Arti di Brera” in Milan to begin, at 17, an apprenticeship in a bicycle/tricycle factory. There he built his first motorized tricycle, and soon thereafter his first automobile. The construction was so remarkable that it earned him a prize at an internationally recognised exhibition in Milan. In the following year, he moved to Niederbronn in Alsace, where the manufacturer De Dietrich, impressed with Bugatti’s first construction, trusted him with the management of automobile manufacture. Ettore Bugatti developed new models and took part in several car races until 1904. After leaving De Dietrich & Cie, he took on a number of jobs in automobile construction, including a job at the Deutz gas engine factory in Cologne in September 1907. At this time, Bugatti privately developed a very light vehicle, the Type 10, which he built a little later under his own name. He left Deutz in 1909 and leased the empty buildings of a former dyeworks factory in Molsheim (Alsace) and founded his own automotive company. Production of the T13 began and grew year by year.

Thereafter came other light sports cars and an entry into motor racing. Bugatti enjoyed racing successes at Le Mans in 1920 and four times at Brescia in 1921. He built the famous Type 35 Grand Prix car in 1925, an automobile that won an incredible 412 races in only its first nine months. It was during these years that production of those automobiles people associate with the Bugatti brand was begun. Racing, sport and touring cars of their quality can hardly be found from any other factory. The prototype for the kingly limousine was produced in 1926: the Type 41 Royale.

Ettore was a versatile inventor. He not only built cars but also dedicated some of his time to the construction of trains, aeroplanes and boats. So it was that Royale engines were produced for the new high-speed train for French railways in Molsheim at the beginning of the 1930s.

Production of the Type 57 began in 1934. This best-selling touring car’s body was designed by Ettore’s son Jean. Ettore handed over day-to-day running of the business to Jean in 1936, by which time his son had made a name for himself as an exceptionally gifted designer. Ettore’s hopes for the future of the company rested on his son’s shoulders. Tragically, Jean died in an automobile accident in 1939, a heavy blow for Ettore that also had consequences for the company. Ettore Bugatti died from complications arising from pneumonia on 21 August 1947 in Paris. His business was closed upon sale of the company at the beginning of the 1960s. It was not until Volkswagen acquired the brand rights in 1998 and began development of the Bugatti Veyron 16.4 that the foundations for a sustainable and successful continuation of the brand were laid.

Ettore Bugatti’s legacy is still present today and lives on in the brand. 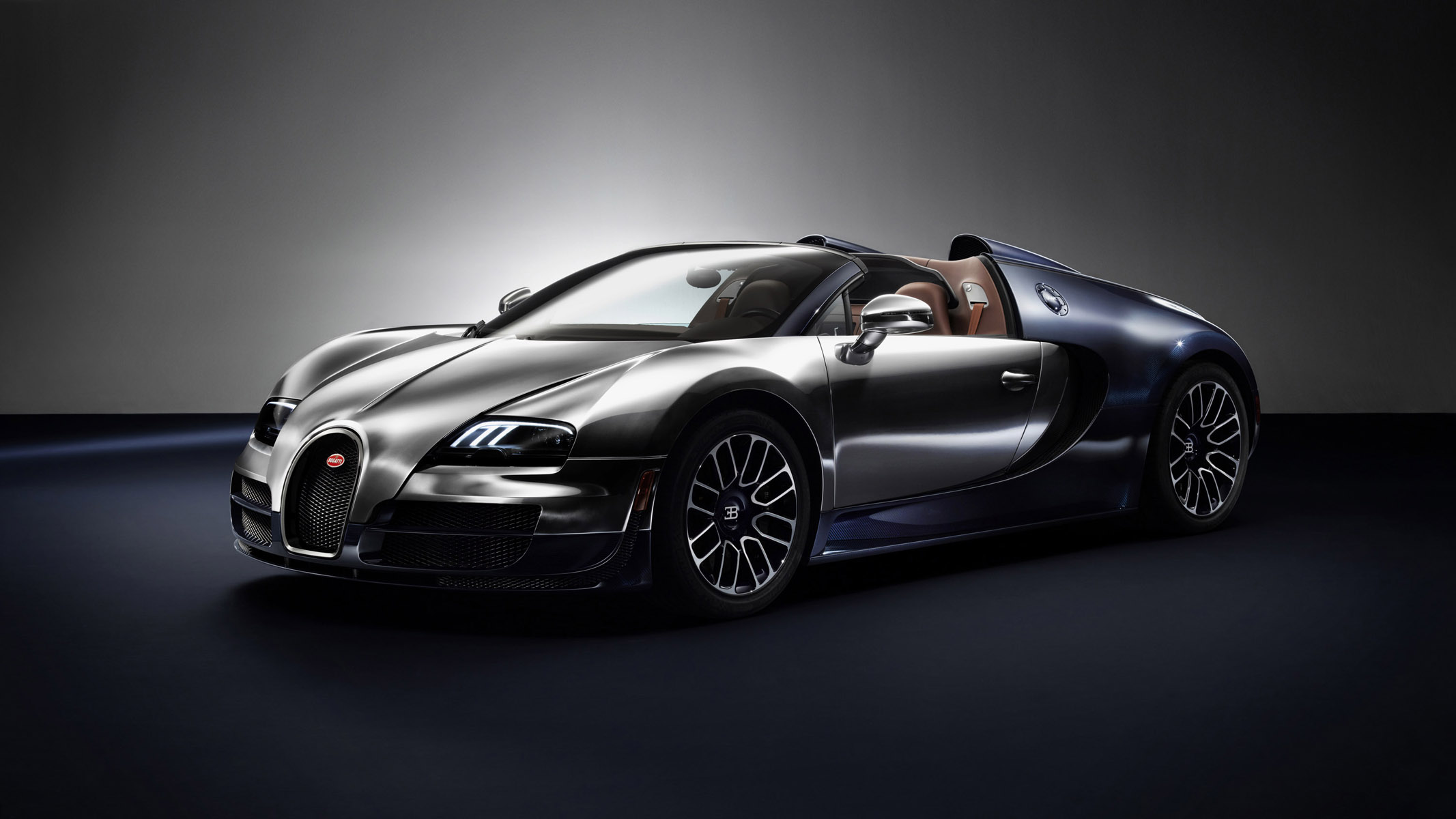